How a Life Was Changed Completely (Photo)

(Minghui.org) Mr. Shen Zhiru grew up in a successful family run restaurant business. His grandmother is the well-respected elder of the family, and built their chain of Taiwanese cuisine herself. She is undoubtedly the pride of Shen's family. Shen is the oldest grandson, and because his parents and grandmother were always busy with the business, they did not have time to take care of their kids. As a result, he and his three brothers and sisters grew up with very independent mindsets.

Shen's father tried very hard to earn his mother's respect, but no matter how hard he tried, he could not meet her requirements. His father then started to work on other businesses, but unfortunately he continually failed with that too. People around them either felt sorry for his father or looked down on him. Shen anxiously hoped that his father could soon succeed and gain his grandmother's approval.

Shen also wanted to get his grandmother's attention, and throughout middle school and high school, he was always helping in the restaurant kitchen, and worked as an apprentice there during the summer break. He just wanted his grandma to notice him, and get her approval and love. But he never did.

Although Shen grew up in his family's enviable environment, the feelings of inferiority and frustration caused him to become sensitive and sad. He hoped to get comfort from a relationship with a girl he met when he was young, but ended up more frustrated and disappointed. He began to feel exhausted and although still young, he often felt tired, even during the daytime.

From Taiwan to Paris

Shen decided to leave Taiwan and study in France, thinking that a change in environment would be good for him. He went back to Taiwan in between semesters and gradually started learning a type of qigong. He also went to a Buddhist temple and a church in the search of answers to life's questions. Although he was looking for the meaning of life, he was still puzzled and his weak physical condition did not improve. 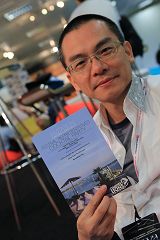 After graduating from the Architectural Institute E.S.A. in Paris in 2000, Shen founded the Moulin Orange Digital Communication Co., Ltd. At first, his company only had two employees, but when the company reached its peak, he had over 40. From 2001 to 2012, his company acted as an agent for the online sales and advertisement for Nike Taiwan.

Five years of study overseas enriched his experience, expanded his horizons and helped him to start his business. But it still could not fill the emptiness in his heart or solve his questions about life.

Shen realized that when he owned more, he worried more about everything he owned, and was afraid of losing them. He even went to see fortune-tellers to seek advice on things like telling whether the employees' zodiac signs had conflicts with each other, whether the company's fortune for the year would be good or bad, or whether the Feng Shui, or location of the office, was correct. Success came very quickly to Shen, but he still wondered why there were so many troubles in his life.

At the end of 2003, Shen happened to run into the psychic who used to help him. But he was surprised when she told him that she no longer worked as a psychic, and that now she had started to cultivate in Falun Gong.

Shen could not help but smile when he heard the word “cultivate.” He had always read the Buddhist Jingang Scriptures when he served in the army, which was left in the cabinet of the dormitory by a former solider. He accepted Master Li's lecture Teaching the Fa at the Conference in Europe from the practitioner, and read it through thoroughly when he got home. He then searched online and found the book Zhuan Falun, along with other articles by Master Li. Shen also downloaded the Falun Gong exercise instruction video and started to practice the exercises at home. He also attended the nine-day Falun Gong study class. 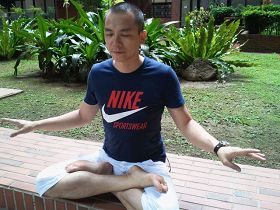 When Shen finished the nine-day class, he said that he could feel a strong energy field while doing the exercises. It was a feeling that he had never experienced before when he practiced Qigong or Tai Chi. He felt that a completely new world had opened up in front of him. He started to look back on his life and found that he was arrogant and had very high requirements of his staff. If they did not meet his standard or do things well, he often got very angry and shouted at them. Shen realized that he had hurt a lot of people this way, and had also affected his own health.

After Shen started to practice Falun Gong he tried to follow Master's principles of Truthfulness-Compassion-Forbearance to be a good person. He also found that when he started to treat the employees with compassion, they would deliver better work at a higher standard.

Shen's company was responsible for Nike's advertising in Taiwan for the past 12 years, but due to unforeseen circumstances creativity for the advertising became more and more constrained, and communication problems also arose between both companies. After several unsuccessful meetings Shen decided, in the best interests of his company and its employees, to terminate the contract with Nike and hoped to use this free time to develop new business opportunities. However, he still harbored bad feelings when he saw his former client's advertisements on the street or came across the advertising companies that now had Nike's business. Shen held on to the thought that other businesses only had the contract because he gave it up. After looking inward he found his attachment of jealousy.

Whenever Shen's emotions started to surface he always thought of Master Li's teaching, which helped him to truly let go of his attachments. Master said:

“Sometimes, you think that something should be yours, and others also tell you that it is yours. Actually, it is not. You may believe that it is yours, but in the end it is not yours. Through this, it can be seen whether you can give it up. If you cannot let it go, it is an attachment. This method must be used to get rid of your attachment to self-interest. This is the issue.” (Zhuan Falun)

In order to reward his employees, Shen once organized for them to go on an all expenses paid trip. But when they returned, instead of thanking him he heard some negative comments, which made him feel upset. He realized that he was still pursuing fame and wanting to show off.

It is hard for people not to have human notions, but practitioners who are striving towards Consummation, need to see things clearly instead of through the lens of personal interests and human conflicts. Practitioners need to give up their human attachments and desires during tribulations and truly consider others first.

Shen sat quietly in the back row of the conference hall, with the feeling of inferiority in his heart. But as soon as Master arrived, Shen could feel Master's energy field was so strong that he could not stand still and had to move backwards. He had tears in his eyes for the whole time Master taught the Fa on stage.

Currently, Shen not only cultivates himself to improve his xinxing and balances the relationship between business, family and society, but also spends his spare time helping more people understand the facts about Falun Gong and the persecution.