(Minghui.org) Australian Falun Gong practitioners held an informational event in a large Chinese community in Sydney on August 19, 2012, to help people learn the truth about Falun Gong and the persecution in China.

Hurstville is the largest Chinese community in Sydney. It is nicknamed “Little Hong Kong.” It is also a bustling tourist site. Located on the coast, it provides perfect conditions for spotting whales and dolphins between June and October.

Practitioners set up an informational booth and banners in the area. They also demonstrated the five Falun Gong exercises. Many people stopped by to learn about the practice. More than a hundred local citizens also signed a petition to call on the Chinese communist regime to immediately cease the persecution of Falun Gong in China. 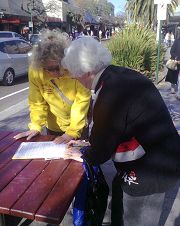 A woman signs a petition calling for the end of the persecution of Falun Gong in China.

Ms. Yue, a Falun Gong practitioner who escaped from China not long ago, shared her experiences of being tortured for her faith while still in China. She was illegally arrested in 2002 and jailed for 8 years because she practices Falun Gong. She was grateful for the opportunity to clarify the facts about Falun Gong to the public in Australia.

Mr. Li from China said that he has recognized the evil nature of the Chinese Communist Party (CCP) for some time. The regime promotes atheism, brainwashes people and has destroyed traditional Chinese culture, he said. Mr. Li added that the collapse of the CCP is inevitable in the not-too-distant future, and that the regime itself knows this to be true.

Ms. Lin immigrated to Australia from Hong Kong before 1997. She witnessed how the CCP persecutes Chinese people firsthand, as her own parents had suffered greatly at the hands of the communist regime. She said she feels lucky that she is now far way from the CCP's rule and hopes that all Chinese people could one day enjoy life without the CCP. People from the international community should do more to help stop the persecution of Falun Gong in China, Ms. Lin added.

A dozen Chinese people renounced their affiliation with the Chinese Communist Party and its related organizations at the event.

“Rectifying Myself With the Help of Fellow Practitioners ”