(Minghui.org) Corinna immigrated from Taiwan to the United States nearly four decades ago. She loves life and enjoys singing, dancing, exercising, and a high standard of living. She takes her job seriously and likes to travel with her family in her time off. 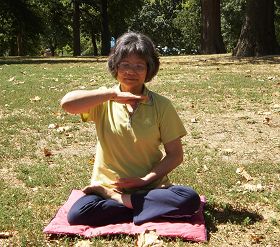 One day in 1997, Corinna suddenly felt out of breath while doing yard work. Her legs were swollen and she almost fainted when she tried to walk. She had always been healthy and could not figure out why she felt that way. Her husband urged her to see a doctor. As soon as the doctor examined her, he told her that she needed to be admitted for urgent care. Corinna was shocked. She thought: “I've always been a healthy and a happy person. How did I end up at the hospital so suddenly? Life is so fragile.”

The doctor said she had arterial thrombosis; her life was at risk and she could die if blood clots traveled to the brain or the heart. She was hospitalized for two weeks and was not allowed to move around. She was not even allowed to get out of bed to take a shower or use the restroom. Initially the doctor wanted to operate on her, but the medication seemed to have worked, and thus the surgery was canceled. When she finally got out of the hospital bed, her legs were in tremendous pain. Corinna still has lingering fears from the experience. After she was discharged from the hospital, the doctor asked her to continue to take medication and observe the situation closely. She was told to be careful, consume a light diet, and avoid any internal injuries, because her life could be in danger if there was internal bleeding.

Corinna followed the doctor's orders and took care of herself, but her condition was still unstable. Once, her dentist needed to pull one of her teeth and told her to stop taking the thrombosis medication for three days. Consequently, her legs swelled up again. She felt dejected, thinking, “Is my life going to be like this from now on?” Corinna was not afraid of dying, but was afraid of pain and the prospect of not being able to take care of herself if she became paralyzed. The doctor said that many patients with her type of illness need to be on medication for the rest of their lives. She felt very discouraged.

One day in 1999, Corinna saw in a local Chinese language newspaper that Falun Dafa practitioners would be holding a nine-day seminar and would teach the exercises. Corinna liked to exercise and was interested in learning more about qigong practice. The five Falun Dafa exercises were easy to learn and the teaching was free. She also liked Falun Dafa's principles of Truthfulness-Compassion-Forbearance that guided one to be a good person. Although Falun Dafa is well known for its miraculous healing power, Corinna did pay not much attention to it and was not thinking of learning the practice to cure her illness. Even though some practitioners shared with her that Falun Dafa could purify her body and eliminate her illness, she did not understand it at first. Due to the severity of her illness, she continued to go to the doctor and take medication.

One day, Corinna was out of the pills and wanted to see her doctor to obtain more medication, but her doctor was on vacation. She did not feel like seeing another doctor, so she waited a few days. She was surprised to find that her legs were not swollen and there was no feeling of discomfort, even though she had not taken medication for several days. She suddenly realized that her illness was gone! Still, she was not completely sure. When her doctor returned from vacation, she obtained another prescription from him, in case her legs swelled up again. However, several months passed by, and her legs were still fine. Although Corinna did not take any medication, she did not throw the bottle away. While she has no plans to use the medication and no longer has any fear of thrombosis, she wanted to keep it as proof of regaining her health, to demonstrate the wonder of Falun Dafa.

Besides arterial thrombosis, Corinna also no longer suffers from the hay fever she had every spring. She is over 60 years old and is full of energy. “I am not afraid of thrombosis anymore,” she says. Corinna volunteers to teach Falun Dafa exercises in her community. She shares with new students: “Since everyone's situation is different, you will feel different things. I've had so many wonderful experiences practicing Falun Dafa, and I hope you can experience this as well.”

“Over 10 Falun Gong Practitioners in Shuangyashan Arrested in 2012 ”