(Minghui.org) Turku is located in the South of Finland. It is the old capital of Finland, and also the oldest city in Finland, with a population of 180,000. Its long history has made Turku a cultural and business center. On July 22, 2012, the largest circulating newspaper in Turku “Finland Turku Daily” reported on Finnish Falun Gong practitioners’ July 20 anti-persecution event, which introduced Falun Gong and the detailed the persecution in China.

The article on Turku Daily 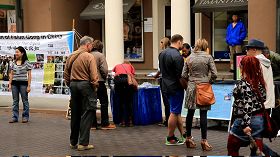 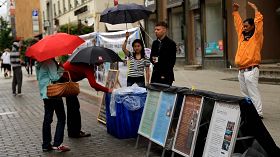 The report, entitled “Uncompromised People” said that in the pedestrianized streets of Turku city center, a group of Falun Gong practitioners wearing yellow T-shirts were busy hanging banners, erecting display boards, and even today’s rain hasn’t halted their truth clarification event. The article stated that Falun Gong is also known as Falun Dafa, was introduced to the public in China in 1992, and it is a traditional Chinese cultivation practice that cultivates both longevity and moral character. It prohibits killing. Because of its great impact on the improvement of physical health and moral standards, it was welcomed by the Chinese authorities at all levels before 1999. In July 1999, the Chinese regime started to suppress Falun Gong. Thirteen years have passed, and over 3,500 people have been persecuted to death.

Regarding the reason for the persecution, the Finnish Falun Dafa Association’s vice chairman said, “Because the Chinese Communist Party (CCP) had always controlled people’s thoughts, at that time the number of people who practiced Falun Gong was well over 70,000,000, the CCP started to view Falun Gong as a threat.”

The report also talked about practitioner Lu Shi Ping, who had been brutally persecuted in a Chinese forced labor camp. She had five other good friends who were persecuted to death for practicing Falun Gong.

“I had a good life in China, I practiced Falun Gong due to my stomach problem. One day in July 1999, my boss suddenly locked me into an empty office, gave me paper and pen, and asked me to slander Falun Gong.” said Lu Shi Ping.

Lu didn’t follow her boss’s demands. On the contrary, she handed in her resignation to declare that she’d rather lose her job than give up Falun Gong. The boss tore up her resignation letter, and insisted that she only practice at home and keep it a secret.

Lu Shi Ping’s continued to tell people the facts about Falun Gong, and she was arrested a few times, and eventually sent to a forced labor camp.

“At first they coaxed me to give up Falun Gong with good words, but after a week their intentions were still in vain, so they put me in a secured lockup and tortured me. There she was beaten, subjected to cold, and force-fed. Three months later she was released.

In the forced labor camp, Lu Shi Ping and other Falun Gong practitioners were subjected to many cruel tortures like electrical shocks, being hung by handcuffs, being forced to watch government propaganda that slandered Falun Gong, and undergoing brainwashing.

When the reporter asked her about the impact of this persecution to her faith, Lu Shi Ping said, “When I first practiced Falun Gong, no one forced me. I choose to practice or not, it’s my own freedom. But the CCP tries to use electrical batons and cruel tortures to make me give up my belief in my mind. It can therefore be clearly seen who is righteous and who is evil, can’t it? If this persecution had any impact on me, it would be to let me see clearly the CCP’s evil, and make me believe firmly in Falun Gong.”

The article concluded by saying that even in Finland, Falun Gong practitioners are still subjected to the CCP’s persecution dressed in other forms. A local Finish has been threatened (by the CCP) to not participate in Falun Gong’s activities appealing for human rights in China.