(Minghui.org) On August 26, the Falun Dafa Cultivation Experience Sharing Conference in Austria was held in Vienna. 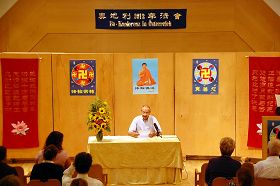 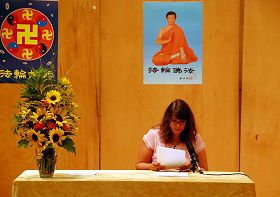 A practitioner is giving a speech.

Wolfgang shared his experiences of promoting the Shen Yun shows. He tried to set up a ticketing spot at a mall, but he had a notion that it was impossible. To his surprise, when he introduced Shen Yun to the manager, the manager liked it and agreed to set up a spot right away. Wolfgang realized that he should not be blocked by his own notions, and we should always try to sell Shen Yun tickets at the places where mainstream society like to go.

Rosi said that she was not diligent in cultivation for a while. She didn't care about anything and she didn't know where her cultivation was going. She then read the Fa intensively. She realized that it was the old forces trying to destroy her, and she should not follow the old forces' arrangement. She came back to cultivation. Rosi also talked about how she helped to hold the local “Truthfulness-Compassion-Forbearance” art exhibition.

Rene's celestial eye has been open since he started practicing. He shared with fellow practitioners what he has seen. He also talked about the importance of believing in the Fa and sending forth righteous thoughts. Once, he encountered technical trouble when he was introducing Shen Yun in a club. He sent forth righteous thoughts and asked Master to help. He saw the lights and gods in the other dimension. Very soon the technical problem was solved.

One day, Rene talked about the truth of Falun Gong to a friend. He saw that when his friend learned the truth, the sentient beings in other dimension were celebrating, and Rene's own gong column was rising. He realized that that Master helped him to transfer the de into gong when he was clarifying the truth and trying to save people.

Mr. Pu, a Chinese practitioner, joined the phone-team, making phone calls to China and clarifying the truth. Compared to other practitioners, he saw the laziness in himself. He then started reading the Fa, doing the exercises and sending forth righteous thoughts every day. In the beginning, he didn't dare to make the phone calls. Later, he was in a better cultivation state, and he gained some confidence. He got rid of his fear, zealotry and the fighting spirit. Mr. Pu also shared his experiences of clarifying the truth to Chinese people at tourists spots.

“The Secret of Being Vibrant in My Seventies ”