(Minghui.org) The International Organ Transplant Care Association, headquartered in Taiwan, held a forum to disclose important information about organ transplants in China on August 19, 2012. The forum was held at the Siwei Public Housing Square, to the south of the Kaohsiung City Culture Center. The association revealed the secrets behind China's organ transplants, as well as the associated risks of illegal organ transplants. The local residents who attended the forum were very shocked and upset when they learned that the Chinese Communist regime has been accused of harvesting organs from Falun Gong practitioners and selling their bodies for profit. Many called for justice for these horrendous crimes. 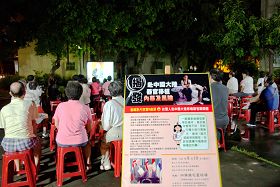 The association played a video of the speeches made by David Matas, Esq. and the Hon. David Kilgour, Esq. during their 2011 book tour in Taiwan for their report titled, Bloody Harvest: Revised Report into Allegations of Organ Harvesting of Falun Gong Practitioners in China. The invited guests and the more than 300 in the audience were shocked after they heard the speeches. Professor Wu Ying-Ming of Open University of Kaohsiung exclaimed, “How could this be? I am terrified!”

There are a large number of people in Taiwan who suffer from uremia. The number of people receiving dialysis in Taiwan continues to increase every year. Taiwan's Department of Health estimates that the number of Taiwanese who received a kidney or a liver transplant in China to be 450 in 2005. However, the sources of organs in China are usually unknown to organ recipients.

A representative from International Organ Transplant Care Association said at the forum, “Professor Gao Wei of the Armed Police Frontier Hospital in Shenzhen, China often gets asked by his patients before the organ transplant how the donating death-row prisoner was executed. He would say, 'Give him (the donor) two shots. One shot for anesthesia and the other for killing the pain.' Why wasn't the death-row prisoner executed by shooting? It is for the sake of harvesting fresh organs. Once he is given anesthesia, the doctor will remove his organs. This is basically removing organs from living, breathing human beings. In addition, the Chinese Communist regime claims that the organs come from death-row prisoners. This is quite unlikely because the so-called death-row prisoners in China include political prisoners, prisoners of conscience, people persecuted for their religious beliefs, and dissidents.

“The report, Bloody Harvest, catalogues reports prepared by Amnesty International from publicly-available information in China, and it deduces that 'the average number of prisoners sentenced to death and then executed between 1995 and 1999 was 1,680 per year. The average between 2000 and 2005 was 1,616 per year. The numbers have bounced around from year to year, but the overall, average number for the periods before and after the Falun Gong persecution began is the same. The execution of prisoners sentenced to death cannot explain the increase of organ transplants in China since the persecution of Falun Gong began.'

“Once, a physician investigating torture in China's prisons asked to meet with death-row prisoners in China, but he was told that there were no death-row prisoners available because a person sentenced today would be executed tomorrow. According to Bloody Harvest, 'kidney transplants shot up, more than doubling once the persecution of Falun Gong started [in 1999]. There were 3,596 kidney transplants in 1998 and nearly 10,000 in 2005.' Matas and Kilgour also question the short waiting times advertised by hospital websites in China, boasting short waiting times ranging from one month to as little as one week. Matas and Kilgour add, 'In contrast, the median waiting time in Canada for a kidney was 32.5 months in 2003, and in British Columbia it was even longer at 52.5 months. The survival period for a kidney is between 24-48 hours and a liver about 12 hours. The presence of a large bank of living kidney-liver 'donors' must be the only way China's transplant centers can assure such short waits to customers. The astonishingly short waiting times advertised for perfectly-matched organs would suggest the existence of a large bank of live prospective 'donors.'' There is great profit to be made in the trade of human organs. We call for both the government and society to protest such horrendous crimes.”

After watching the documentary “Harvesting Organs from Living Humans,” Ms. Wu, a local resident in Kaohsiung, was very touched. She made a comment at the podium. She said, “I have two friends. One of them is in her 40s and twice had a kidney transplant. The other has had dialysis for ten years. She is planning to get a new kidney as soon as she saves enough money. I did not give her any advice, but I will pass the information that I have learned on to her. I will also give her the report, Bloody Harvest, as a present. I am obliged to tell her. Patients of kidney diseases have been spreading news that it is easy to get a new kidney in China, but no one thinks about whether the kidneys come from an ethical source. Silence kills. Silence makes us accomplices. This is something that's worth pondering.”

Ms. Wu also talked about her perception of the Body Worlds Exhibition developed by Gunther von Hagens. She said, “There was a Body Worlds Exhibition a few years ago in Kaohsiung. I think there must be something wrong with it. It is grotesque. Some people even bring children to watch the exhibit in the name of education to justify the crime and sin. It is absolute horror.”

Ms. Wang is a government employee. She had heard from her colleagues about the persecution of Falun Gong practitioners in China. After she watched the documentary and listened to the speeches, she said, “China under the rule of the Chinese Communist Party (CCP) is notorious for its human rights violations. The regime suppresses and persecutes dissidents with its political power. It is just too cruel to harvest organs from living Falun Gong practitioners. Live harvesting means killing a healthy, living person by removing his vital organs! It is just too cruel, especially to a cultivation community that practices kindness and compassion. We should file the most severe lawsuits against the Chinese Communist Party through world organizations and punish it for its crimes and end the persecution.” She added that she will tell her friends not to have organ transplants in China.

Ms. Luo is another local resident who attended the forum. She saw a poster about the event outside her condo building. She confessed that she did not know about the frightful organ harvest taking place in China before she came. She said, “It appears that this documentary took a lot of work. It is very cruel to remove organs from a living human being. We should raise our people's awareness and conscience. I support this cause. I call for the government's help. For example, we should not pay the post-transplant health care expenses for the Taiwanese citizens who have had organ transplants in China. This might deter people from getting transplants from unknown sources.”

Mrs. Qi, a medical doctor, was shocked and outraged when she learned that China harvests organs from living Falun Gong practitioners, and that it has even sold their bodies to be plastified for the Bodies World Exhibition. She called the Chinese Communist Party inhuman.

Mrs. Qi said, “Each and every one of us is obligated to stand up and end this. We must expose this heinous crime to prevent more people from going to China for organ transplants. The Taiwanese government must make a law to stop this. We must not remain silent. Doctors are supposed to save people's lives, but those doctors in China kill Falun Gong practitioners for profit. It is inhuman. They're killing lives, not saving lives. It is like what David Matas and David Kilgour have called in their report, Bloody Harvest: 'a form of evil yet to be seen on this planet.'”

Mrs. Qi spoke to her colleagues in the medical profession, “Do not forget that a doctor's duty is to save people's lives and help people be free of pain. Doctors should never become a means of China's illegal organ transplants to make illegal profits. You shall be condemned by your conscience. I believe that those who do bad things will meet with retribution. I urge those doctors who participate in or know about this to respect every person's human rights by revealing the crimes. Do not be an accomplice to the Chinese Community Party.”