(Minghui.org) When the Chinese Communist Party (CCP) began to persecute Falun Gong, it utilized a large amount of national resources to spread false information about Falun Gong to the world. Many Chinese people residing in Toronto, Canada were among those who believed the CCP's false propaganda. However, through continuous efforts by the local practitioners to clarify the truth about Falun Gong, they have pierced through the lies of the CCP. Consequently, many Chinese people who initially had misunderstandings have changed their views about Falun Gong.

As a local practitioner, Ms. Wu Yanxia has been clarifying the truth in Toronto's Chinatown for the last eleven years. Being a cultivator, Ms. Wu naturally exudes kindness and peacefulness, and has made many friends in the local community. She said, “A kind smile can shorten the distance between two people and eliminate animosity in others. When I help people with baby carriages or the elderly by opening the door for them, I'm able to melt their indifferent attitudes. When I warmly extend my helping hands to those who need help, I can rid them of their numb and puzzled facial expressions.” 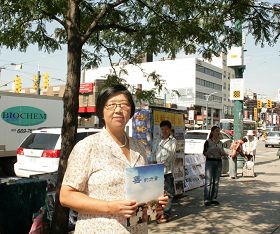 During the past eleven years, Ms. Wu noticed a gradual change in the attitude of Chinese people toward Falun Gong. She also saw many kindhearted people supporting Falun Gong. Ms. Wu said, “I sense the transformation by looking at people's facial expressions. Some will smile at me or greet me, others will say a few words of support and encouragement.”

The Owner of a Pharmacy - from Being Hostile to Being Hospitable

The Falun Gong information display board is located next to a pharmacy. When Wu Yanxian first came here, other practitioners said the owner of the pharmacy was very unfriendly to the practitioners. Every day, she would walk by the display in a hurry, with a hostile looks in her eyes. She wanted to talk to the owner, but could not find the opportunity to do so.

Two days, one month, and two months went by... Ms. Wu said, “Although we were next to each other, out hearts were very far apart.”

It snowed heavily one cold winter night. The next day when Ms. Wu set up the display board, the snow on the ground was packed very tight by pedestrians who had been stepping on it. Ms. Wu walked to the pharmacy and asked the owner, “May I please borrow your snow shovel? Ours is broken.”

The owner agreed to lend her the snow shovel. Ms. Wu thanked the owner and cleaned up the snow in the display area, including the area in front of the pharmacy. She then bought a bag of salt from the supermarket and spread the salt on the ground to prevent ice from forming.

Ms. Wu cleaned the shovel, and returned it to the owner. The owner smiled for the first time. Ms. Wu recalled, “The owner had such a bright smile. She thanked me and asked me with great concern, 'Your hands are cold and red. Why don't you put on some gloves?'”

“Ever since then, when the owner walked by the display board, she would look at the display and smile at us.” Ms. Wu continued, “One time I ran into her in the subway station. She greeted me as if I was an old friend of hers. When she found out that I had an evening job and clarified the truth by the display board during the day, she told me to take good care of myself.”

Owner of Grocery Store Looked After the Information Display Area

There is a grocery store near the display area. Every time the owner of the grocery store saw the display, he would get very upset and complain. One day Ms. Wu kindly said to him, “Please let us know if you have any thoughts or opinions. Getting upset is bad for your health.” The grocery store owner angrily pointed at a photo and said, “Look at this picture! It's so bloody! Don't you think it is so unsightly and unappealing?”

Ms. Wu replied, “But those are facts...” The owner interrupted her and said, “Alright, alright. I don't want to listen to you anymore.” He then walked away.

On another occasion, the owner pointed angrily at the display and complained, “I don't understand. Why are you showing this negative news to outsiders. How can you be proud of it? Don't you have any shame? We are all Chinese, so why are you doing this?”

Wu Yanxia understood his concern, so she said to him: “You are right. The Chinese people love saving face. We would rather starve ourselves and offer the good food to our guests. No matter how much we are being wronged, we still show our smiles to others. Do you really think we like these photos? Don't you think we'd rather show outsiders things of our country that we could be proud of? Do you know that there are so many people that have been arrested, sentenced, and tortured because they spoke the truth to the government? Do you know that my relative is jailed because he did not want to lie to people? We are being persecuted for trying to be good people, and being jailed for speaking the truth. Do you think that's fair? Would a nation have any hope if the government censors the truth and persecutes the good people?”

Ms. Wu continued, “Then I burst into tears and couldn't talk anymore. The owner was initially very angry, then his face turned red. Later he calmed down and said in a low voice, 'I know. I know what the CCP has done, but I just feel uncomfortable when I see these pictures.' Later when he walked by the display board, he would have a smile on his face.”

One evening, Ms. Wu stayed very late at the display board area. No one came to take over her shift. She did not have a cell phone or the phone number of the coordinator. She saw the owner of the grocery store and told him the situation. The owner asked her if there was any money inside the material box. She said, “No.” Then he said, “I will watch the area for you. Why don't you go make some phone calls?” Ms. Wu looked in her pockets but could not find her wallet. The owner gave her a coin. With that coin, Ms. Wu called her family and asked them to contact the coordinator. The owner did not leave the display area until Ms. Wu finished the phone call.

Ms. Wu said, “Since then, every year when Shen Yun Performing Arts is in Toronto, I would put posters on his store front. He would always reply with a smile, and tell me to post as many as I want.”

In recent years, many people from Mainland China traveled to Canada to visit relatives, while others come for business, or leisure purposes. Ms. Wu said, “They were very surprised to see our display board. They would look at the display and listen to us talk. Last spring, an elderly man who looked like a CCP cadre came here to visit his relatives. After he understood the truth about Falun Gong, he asked for a copy of the Nine Commentaries on the Communist Party.” I urged him to quit the party, but he refused.”

“I saw him two months later, and he seemed to avoid us intentionally. When I greeted him, he purposefully talked about other things, avoiding the topic of the Nine Commentaries or “quitting the party.' When I asked him if he had finished reading the Nine Commentaries, he said he was a good person, did good deeds, was not greedy, and did not take bribes.”

Ms. Wu was afraid to miss the opportunity and not be able to see him in the future, so she said, “Actually, those who add glory to the CCP are committing a crime!” The man had a blank look then asked seriously, “Why do you say that?” Ms. Wu answered, “Because those who praise the CCP are misleading the people in their views of the party. They are acknowledging what the CCP has done is great, glorious, and correct. Think about it. After the CCP was established, why did it recruit the elites in the field of the academia, arts and literature, and sports? Wasn't it to make the CCP look good? When people with a conscience learn about its true nature and continue to uphold the CCP at all cost, isn't that committing a crime against the Chinese people?”

“He blushed and was speechless. After a lengthy discussion, he agreed to quit the CCP using an alias.”

Last summer, Ms. Wu met a businessman from Shenyang City, in the northeastern part of China. Because Mainland Chinese people do not follow local business laws and regulations and due to the collusion between business and government officials, this businessman had a lot of problems operating his business. He agreed with the principles of Falun Gong, and admired the practitioners' resistance against the persecution.

The first time they met, Ms. Wu quietly listened to his story. He lamented, “I wish the Chinese people could be like Falun Gong practitioners. Chinese people need to be awakened to the truth.” It was a very warm day. Before he left, he bought two glasses of sugar cane juice from the booth next door and offered them to Ms. Wu and another practitioner. It was a sign of respect from the businessman.

After eleven years of clarifying the truth to this small Chinese community, Wu Yanxia noticed the change in attitude in many Chinese people. She said, “Two days ago, I saw a Chinese man who used to live in Chinatown. Later he moved to Markham, Ontario. In the past, he often criticized and argued with us while looking at the display board. In recent years, he stopped coming here because of his illness. He was very excited to see us here and lamented, 'Wow! You are still here? Because of your unwavering spirit, I believe in the near future, the sun will bring freedom and warmth to the land of China!'”