(Minghui.org) Over thirty organizations in Hong Kong organized a parade for July 29, 2012 to show their strong objection to a proposed addition to the curriculum in public schools, which they fear will lead to brainwashing of students. Many parents brought their children to the parade. Hong Kong residents do not want their children to be subjected to the Chinese Communist Party's (CCP) brainwashing style education. Participants included parents, teachers, students, and pro-democracy activists, who demanded that the Hong Kong administration immediately withdraw the so-called “National Education Section” proposed in the school curriculum. It is estimated that approximately 90,000 people participated in the parade.

“National Education” is in fact brainwashing style education used to extol the virtues of the Chinese Communist Party.

Mr. Chung took part in the parade with his two-year-old daughter. He voiced the concern of the people, “I don't want my daughter growing up thinking that one-party dictatorship is good. I don't want her to believe that no one died on June 4, 1989 on Tiananmen Square. I don't want her to think the Chinese Communist Party is China.” Mr. Chung added, “The most objectionable part is that when the Chinese Communist Party promotes their programs, they don't tell the truth. I am afraid of my daughter growing up not knowing the truth about history, unable to think independently, and not knowing how to judge right from wrong.” Mr. Chung hopes that this form of education will not get implemented in Hong Kong nor promoted further in China.

Under the CCP regime, children are not valued. Over two hundred children lost their lives in a fire in Karamay City due to an order to “let the leaders evacuate first.” Little Yueyue is a child who was hit by a car, but no one came to her rescue. Children died during the earthquake in Wenchuan due to the shoddy school structure. Children all over China ride in old, overloaded school buses. The Chinese government invests less in education than does the country of Uganda, a small country in Africa. Under the Chinese Communist Party, the safety of children is not ensured. Even more detrimental is the fact that the young minds of children are brainwashed by the Chinese Communist Party.

In China, brainwashing starts in kindergarten. Once in kindergarten, children are taught to love the CCP as their mother. Primary school students learn about false “heroes, events, and emotions” from textbooks. What is more worrisome is that the Chinese regime instills hatred in the minds of the innocent children. A primary example is the lie about the staged “self-immolation” incident to frame Falun Gong at Tiananmen Square. This staged event has been published in Chinese primary school textbooks and even made into a movie, which elementary and middle school students are required to watch. After watching the movie, the students are required to write a report about it. 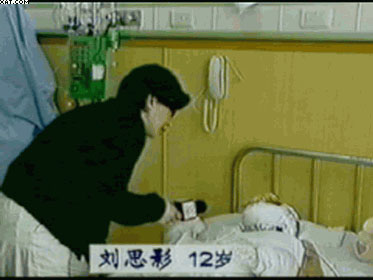 The Chinese Communist regime stirs up hatred with fabricated story of 12-year-old Liu Siying. During the CCTV program about the “self-immolation,” Liu Siying spoke and sang, even though she was “severely burned and had had a tracheotomy,” which is medically impossible.

To deceive the children, the Chinese regime used Liu Siying as a main character. They not only murdered Liu Siying later, they fabricated stories and put them into textbooks and movies, poisoning countless numbers of children in China. The textbooks and movie caused children to misunderstand and hate Falun Gong since they were unable to think independently.

During the several decades of Chinese regime rule, 80 million Chinese have died of unnatural causes. The party has destroyed traditional Chinese culture and introduced its twisted theories to China. Its purpose is to control the human spirit. The Chinese Communist Party fights against nature and destroys the natural environment. As a result, rivers have dried up and there is desertification of land. The party also intentionally destroys human ethics and morals, causing endless social problems. The Chinese regime does not follow the law and countless Chinese people have been thrown into prison unjustly. Despite the innumerable bad deeds it has committed, the Chinese Communist regime forces the Chinese people to praise its “Greatness, glory, and justice.” Today, the Chinese regime is extending its claws to the children of Hong Kong. The movements to “Save the Children” and Quit the CCP are urgent. Nothing less than the minds and lives of children are at stake.