How Many People Would Have Benefited from Falun Gong Had It Not Been for the Persecution?

(Minghui.org) On May 8, 2012, Ms. Jin went to the immigration office early in the morning for an interview with an immigration officer about her residence permit in Canada. In their talk she briefly told the officer about the remarkable improvement in her physical condition, comparing it to before she practiced Falun Gong, which her son recommended to her. The officer was quite moved by her story and granted her the residence permit. He was so convinced by her comments that he said he would some day try practicing Falun Gong. 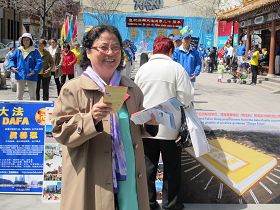 In her 70s, Ms. Jin has to stay in Canada as a refugee because she cannot return to China. She cannot return because she practices Falun Gong, which is being viciously attacked by the Chinese regime. Like many others, she took up the practice to be healed. It did not let her down, and the diseases that were considered incurable by the medical community disappeared without her taking any medicine. She was upset by the fact that Falun Gong, which originated in China, could not be practiced in China, and she had to come to Canada to practice. Falun Gong, which has now been embraced in more than 100 countries around the world, has been widely recognized by the public, garnering more than 2,000 official awards from the governments of different countries. China, on the other hand, is seeking to eradicate it. Deterred by the persecution, she did not dare to try it when she was in China, and she suffered with her bad health for a decade longer. Who is to blame? Ms. Jin's story is definitely not the only one, as many others had similar experiences.

After its introduction to the public in 1992, Falun Gong could be seen in almost every corner of China, including parks, school campuses, and factories. The popularity of the free practice grew rapidly, and over 100 million people became practitioners, many of whom regained their health, including some patients with terminal cancer. The practitioners also enjoyed better relationships with their family members and others, which, in turn, largely stabilized Chinese society. Despite this, in 1999 the Chinese Communist regime, then headed by Jiang Zemin, launched the persecution of Falun Gong, aiming to eradicate the practice from China. The police, secret agents, and judiciary systems are involved in the persecution. Illegal arrests, incarcerations, forced labor, imprisonment, and cruel torture are widely used to break the practitioners' faith in Falun Gong. Many of them even had their organs removed while they were still alive, with their organs used for transplants that profited the government. The Chinese regime's slanderous attacks on Falun Gong deterred many people from even approaching it.

Fortunately, Ms. Jin was able to leave China and come to Canada, where she met with Falun Gong and was given a new lease on life free from any ailment.

In a celebration of the 20th anniversary of Falun Gong's introduction to the public on May 5, 2012, in Montreal, Ms. Jin, dressed in traditional Korean attire, stood on a platform and said, “I am over 70 years old now. I have practiced Falun Gong for only two years, but I have been completely cured by the practice and I have regained my health. I am full of joy and happy, and I have a good outlook on life.

“When I was in China, my husband told me that I had protrusion of the lumbar intervertebral disc and hyperosteogeny. This overgrowth of bone in my vertebra constricted the nerves, and I was disabled when I walked. All too often my legs hurt and were numb. Sometimes the bones hurt even when I was lying in bed. The worst thing was that the pain often intensified at night and would wake me up. I consulted many doctors. They suggested that I choose either Western or Chinese medicine. In Western medicine I could have surgery to remove the peripheral tissue around the openings in the vertebrae so that the nerves would not be constricted. In Chinese medicine I could only ease the pain, and the best way to do that was acupuncture. I resorted to acupuncture. ”

Ms. Jin has two children, but neither one lived with her and she was living alone. She said, “After a period of treatment I could walk, so I went to Beijing to do the paperwork that was needed to go abroad. After I had a physical exam, I was granted a visa to go to Canada. ”

Finding it hard to move around, Ms. Jin felt helpless and frustrated. After many considerations, she chose Air Korea for her flight to Canada. She said, “I chose Air Korea because I did not need to collect my luggage when I changed airplanes as it would be delivered directly to my destination. All other airlines require their passengers collect their bags when they change planes, and they have to go through the check-in process for the next flight. So I took an Air Korea flight to Toronto, and my son picked me up.”

Having been ill for so many years, Ms. Jin relied heavily on medicine. She said, “When I first came to Canada I carried with me many different kinds of medicine, especially painkillers. I ate the painkillers when my lower back and legs hurt, but the pain persisted. Seeing this, my son said to me, 'Mother, please listen to me. You can try Falun Gong. Just give it a try to see if it works. Just try it.'”

She continued, “Finding it hard to say no to my son's advice, I decided to give Falun Gong a try. With the guidance of my son, I read the Falun Gong literature and did the Falun Gong exercises for two hours every day. After two months, to my surprise, I found myself much more agile than before. Take going upstairs as an example. Before, I had to drag my feet up step by step. One day not long after I had been practicing Falun Gong I could go up like a healthy person.”

Besides her lower back problem, Ms. Jin also had serious headaches from a car accident. She said, “I also had suffered from headaches. In the 1970s I hit my head in a traffic accident and seriously injured it, for which I was hospitalized for a long time. One year after I returned home from the hospital, I had serious headaches and periods of unconsciousness. I asked the doctors for help, but they could do nothing, saying it was a side effect from my injuries in the traffic accident. They could only advise me to take painkillers when the pain was too much to tolerate. I had no choice but to accept it, thinking that the headaches would be with me until the day I died. When the pain came on, I needed to take a dozen painkillers, as one or two would do nothing to ease the pain. I later had to carry painkillers with me whenever I went out; I ate them like candy.”

The painkillers had side effects. She said, “After several decades of eating painkillers, one day I ended up with gastric perforation and a gastric ulcer. Painkillers can harm the stomach with their corrosive chemical compounds. My stomach was so eroded that it perforated, which further caused gastric hemorrhage. At first I did not realize the problem until one day I fell down and fainted, which was caused by anemia. In the hospital I was diagnosed with insufficient blood supply. I was then examined with a gastroscope, and they found the perforation.”

Ms. Jin's headaches made her bad-tempered. She said, “The headaches made me paranoid and irritable. I have a daughter and a son. My daughter sometimes complained that I wronged them in almost everything. I was so distracted by my headaches, but they did not understand me. I thought I had to go on without their understanding me, and perhaps they would change later.”

The headaches from the traffic accident, the gastric perforation caused by overuse of painkillers, the protrusion of the lumbar inveterbral disc, and hyperosteogeny had Ms. Jin seeking medical treatment for most of her life. She said, “Two months after practicing Falun Gong, my lower back pain and the numbness in my limbs were gone. It was so surprising. Furthermore, my headaches just disappeared. When I had the headaches I had extremely poor memory. My head is now very clear, and I've recovered my memory.”

After two years of practicing Falun Gong, in addition to regaining her health, she also has a positive and pleasant outlook on life, something that she had never experienced before. She said, “How happy I would have been if I were like I am now when I was young. I now live with Falun Gong practitioners, and we do the Falun Gong practice together. I am so happy. I wish I'd been able to practice since I was young. That would have been magnificent.”