(Minghui.org) On August 6, 2012, The Truthfulness-Compassion-Forbearance International Art Exhibition opened in the famous La Galleria Pall Mall in central London. On opening day, visitors to the London Olympic Games from around the world came to see the show in large numbers. The evening's opening ceremony brought together dozens of local politicians, artists, entrepreneurs, academics, and invited guests from all walks of life, including five mayors from different Boroughs in the Greater London area. 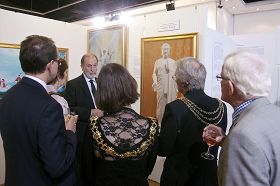 Several mayors attended the opening ceremony of the exhibition 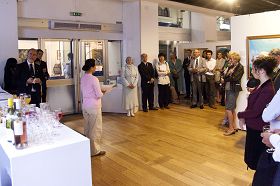 At the opening ceremony, a practitioner recounted the cruel persecution she suffered in China

Mayor of Lambeth: How can we tolerate such a thing? 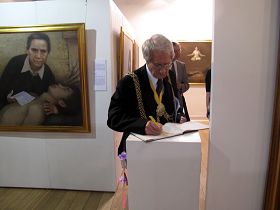 Mr. Clive Bennett, Mayor of Lambeth, wrote in the visitors' book how shocked he was

Clive Bennett, Mayor of Lambeth, spoke highly of the power of the works in the exhibition.

He said: "The main message I will take away with me is the power of art, the power it has to change people's notions. After seeing such a thing as organ harvesting, people will say to themselves, 'How can Western society tolerate such a thing? How can we, without taking any precautions, have dealings with a regime that commits such an atrocity and resists criticism asking it to improve its human rights?'"

Bennett said that the expressions in the eyes in the paintings "Orphans’ Tears" and "My Son" moved him the most. “We do not know how many people have died,” he mused. 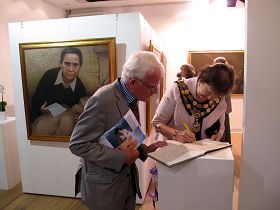 Rita Palmer, Mayor of Richmond upon Thames, noted her appreciation in the visitors’ book

Rita Palmer, Mayor of Richmond upon Thames, was one of the five mayors invited to the exhibition. Originally she planned to only stay for half an hour, but she was so moved by the paintings that she stayed for almost an hour. She wrote in the visitors’ book, "A very powerful message.”

Sir Tony Redmond, one of the invited guests, said the works brought home to him the reality of China today. He added, "I am very touched. I was not aware of this before, and this is a true portrayal of what has been happening in China, for which I am very sorry." 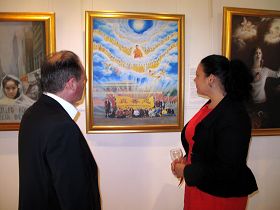 Councilor Ian Wingfield and his wife, Alison, studying the painting "We Come for You"

Ian Winfield is a councilor from Southwark Council and also a deputy leader of Southwark Council. He and his wife, Alison, were both invited to the exhibition. He had heard of Falun Gong, seen Falun Gong practitioners doing 24-hour peaceful protests before the Chinese Embassy in London, and been aware of the persecution in China, but having studied every painting, he was deeply moved.

He said, "This exhibition really shows the torture happening in China. In a very vivid way, it tells the story behind the scenes of the persecution. This is really shocking, especially when it comes to children."

Mr. Winfield said that he and his wife realized with surprise the many similarities between the persecution of Falun Gong practitioners and the persecution the early Christian Church suffered at the hands of the Romans. The couple was also reminded of the power of justice.

He said:, "I’ve found that people's faith is very strong, regardless of what kind of suffering they have to endure. At the end of the day, the pain they have suffered will become a good thing."

Councilor Wingfield also stressed that this exhibition was a good way to get the truth out, because the Communist Party deceives the world by deviating from the facts. He thought the Chinese people needed a real sense of soul awakening and that the Truthfulness-Compassion-Forbearance Art Exhibition could play a role in enlightening them. He added that individuals and organizations in Western society should condemn the CCP's persecution of Falun Gong. 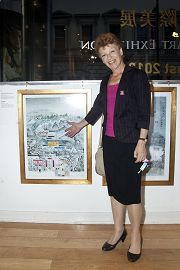 Ingrid Cranfield is a Councilor from the Borough of Enfield in North London. After studying the works in the exhibition, without hesitation, she signed the petition to protest the persecution.

Councilor Cranfield, both a writer and teacher, spoke highly of the works in the exhibition: "Very, very beautiful paintings in the traditional style I love.” She said, "I have to say that each painting is shining and illuminating our hearts. I can feel this light, which opens my heart. I have seen clearly the tribulations Falun Gong practitioners have been suffering.”

As a descendent of a Jewish family that fled Germany because of the Nazis, Councilor Cranfield said she was fully aware of the theme expressed in the exhibition and empathized with the Falun Gong practitioners. She thought that everyone should help to end the persecution. She said she was going to talk about it to others, especially her fellow councilors.

Labor Party leader for the Borough of Havering: I will encourage people to see the exhibition 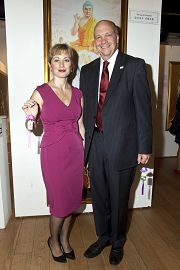 Mr. Michael White, Labor Party Leader of the Borough of Havering, and his companion were impressed by “The Joy of Cultivation”

With his companion, Janina Nowackar, Mr. Michael White, Labor Party Leader of the Borough of Havering, carefully viewed every painting. The two were deeply moved by the experiences related by the Falun Gong practitioner and the paintings.

Mr. White thought that such an exhibition could help people become aware of the truth and know what was happening in the world. He said, "I will encourage people to see the exhibition and be aware of the information expressed by the artists through their works."

Ms. Nowackar was very impressed by “The Joy of Cultivation,” because it made her ponder the essence of life. She said she was going to learn more about Falun Gong. She said, "It explains the nature, the basic nature of everything, so I think I am going to learn more about (Falun Gong). To be able to stop and think about something, have positive thinking, the joy of this practice—such information gives me encouragement. "

It was the third time that the Truthfulness-Compassion-Forbearance International Art Exhibition was shown in London. It remained on display in La Galleria Pall Mall from 6 to 18 August 2012.

La Galleria Pall Mall one of London's most prestigious contemporary art galleries. Located in central London, it is a five-minute walk from Sotheby's, Christie's, the National Gallery, and London's West End theaters.

“Czech Republic: Signature Collection in Three Cities Calling for an End to the Persecution (Photos)”