(Minghui.org) Every year around July 20, Ms. Chen travels from Vancouver, Canada to Washington DC to participate in the Falun Gong activities held there. This year was no exception. The persecution of Falun Gong practitioners in China continues to this day, and Ms. Chen has experienced it firsthand. Two of her friends are among the more than 3,000 practitioners who have been tortured to death. In order to help bring an end to the persecution, she is determined to expose it to the world. 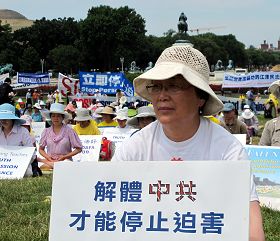 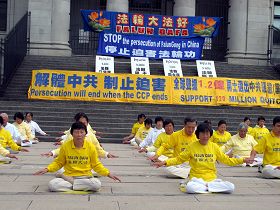 Vancouver Falun Gong practitioners performing exercises and appeal for an end to the persecution in front of a downtown art museum on July 20, 2012. (Ms. Chen at right) 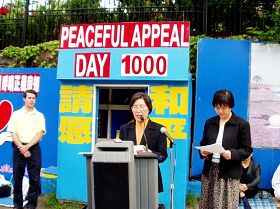 May 26, 2004, Ms. Chen (center) gives a speech at a rally before the Vancouver Chinese Embassy 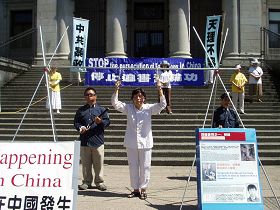 Ms. Chen said that going from a staunch Chinese Communist Party (CCP) member to a Falun Dafa practitioner was a major life-changing experience for her. In the past, her completely indoctrinated mind had stood firmly by the CCP propaganda that, "faith is superstition, everything follows atheism."

A Prestigious Life Inflicted with Pain and Illness

Before she began practicing Falun Gong, Ms. Chen won many awards for her diligence at work. As a senior engineer in the Environmental Protection Department, she also served as Branch Party secretary and CCP Committee member, among other positions within the Chinese Communist Party, and was a deeply loyal party member.

But despite her success, Ms. Chen actually led a life of constant pain and distress. She suffered from a myriad of illnesses, including lung and stomach problems, Meniere's disease, bone hyperplasia, herniated disc, thyroid problems, uterine tumors, and a weak heart. Ms. Chen’s parents were both doctors, and yet her health deteriorated despite their best efforts to help her.

Ms. Chen underwent a massive surgical procedure in 1992, but unfortunately contaminated blood was used during the transfusion and infected her with hepatitis C. A college professor told her, “If I succeed in curing you completely, I would most certainly be awarded the Nobel Prize.” Ms. Chen said, "After hearing his words I sank into despair."

This is Where I Truly Belong

In her search to treat her illness, Ms. Chen studied several different qigong practices, but none of them proved to be effective. But upon discovering that many of her colleagues were practicing Falun Gong, she decided to learn the exercises. She later borrowed the main book of Dafa, Zhuan Falun, to read, and was deeply moved by its rich and profound content. Ms. Chen said, "I decided then that this was where I belonged."

Ms Chen said, “After a month of cultivation, I surprised my colleagues with the speed of my recovery. On one occasion, our file archive room had to be moved, but due to my herniated lumbar disc, I could not move any of the heavy things. But soon after I began practicing Falun Gong, I was able to move heavy books and materials. My lower back pain disappeared, along with all my other illnesses. My mind and spirit underwent a drastic change and I felt full of energy, no matter how busy I was. Our supervisor was so impressed by my recovery that he encouraged everyone to practice Falun Gong as well.”

Falun Gong Taught Me How to be a Good Person

Ms. Chen feels that society is undergoing a sharp decline in moral values. Like being thrown into a big dye vat, one will inevitably pick up bad attitudes and habits. But by using Dafa as a reference point, a practitioner can determine right from wrong, and from there consciously strive to become a better person.

Ms. Chen found that cultivating in Falun Dafa allowed her to achieve a state of inner peace and tolerance. Even when she was treated unfairly, she learned not to harbor resentment or grievances. “Before cultivation, I would always demand to have the final say in all family matters, and always criticize others. The reverse happened after I started cultivation. Now if I do anything inappropriate, my husband will remind me, “Aren’t you a cultivator?”

Detained Three Times Within a Year

When the CCP started the persecution of Falun Gong on July 20, 1999, everything changed. Ms. Chen said, “I was arrested three times within one year after the persecution began.”

The first time Ms. Chen was arrested was on June 18, 2000, when she practiced the exercises at a sports complex. Ms. Chen was detained at the Shahe Police Station for over 50 hours before her workplace finally managed to secure her release.

She was detained a second time soon after, on July 20, 2000. Police visited her home at around midnight and forcibly took Ms. Chen away, promising to send her home soon after recording her information. However, she was driven to Tianhe Police Station instead, where they detained her for over ten hours. She was imprisoned with other practitioners, including a 70 year old and an 11 year old student, and forced to watch videos slandering Falun Gong throughout the night.

The third arrest occurred when she went to Beijing to appeal against the persecution of Falun Gong. As a practitioner, she felt obligated to clarify the truth behind the unjust persecution and clear her Master's name. She thus went to Tiananmen Square carrying a banner that read “Falun Dafa is Good” and shouted, “Falun Dafa is good! My Master is innocent!” At that moment it felt as though the air around her had solidified, as it reverberated with her words that resounded throughout the entire square.

Several plainclothes police officers quickly tackled Ms. Chen soon after, and pinned her head to the ground. She was subsequently transferred to Qianmen Police Station where she was denied food, drink, and even the use of a toilet for over 15 hours. The next day, she was sent to Chongwenmen Detention Center and imprisoned in a cell.

“Altogether, fourteen practitioners were confined in a four-meter-long cell, packed to the extent that at night, even rolling over during sleep was impossible. During the day we were punished, sometimes forced to face the wall for hours, or made to kneel and scrub the floors.”

Four days later, Ms. Chen was handcuffed and transferred to Tanghai County Detention Center in Tangshan, amid heavy snowfall and freezing temperatures of minus 14 degrees. By then Ms. Chen had been on a hunger strike for five days. The authorities also confiscated all the cash and personal effects that she had with her.

“Later my husband started searching for me. My family discovered that I was missing, and they traveled to Beijing with my photograph, showing it to each and every detention center they visited. In this way, they finally traced me to Tangshan and managed to secure my transfer back to Guangzhou. Traveling with them were police officers from my hometown and our neighborhood committee chairman.” Upon reaching Guangzhou, Ms. Chen was imprisoned in the Tianhe Detention Center for three months before her workplace managed to secure her release.

Frightening Her Family and Implicating Her Workplace

Because of Ms. Chen’s persistence in cultivating Falun Gong while petitioning for an end to the persecution, her workplace was also implicated. The employee’s annual bonuses were reduced and the neighborhood committee head was also penalized 500 yuan. Under such pressure, the workplace arranged for Ms. Chen to retire early.

Police from the detention center called every few days to harass Ms. Chen’s family, and in addition to their frequent nightly house calls, disrupted the family calm. Ms. Chen's husband had suffered from a heart attack in the past, and these nightly visits affected his health the most. Ms. Chen said, “On sensitive days (1) he pleaded with me to seek refuge with him elsewhere, away from home. He even brought up getting a divorce if the stress became unbearable. You can imagine the mental strain my family had to endure then.” Under such stressful conditions, Ms. Chen’s entire family managed to immigrate to Canada in 2001.

Persevering in Cultivation, Quitting the CCP

Ms. Chen thus recognized the evil nature of the CCP through its brutal persecution of Falun Gong practitioners. Upon her return from Beijing, she petitioned her workplace Party Committee to allow her to quit the CCP. The reason she gave for quitting was that she could not agree with the way in which Falun Gong was being treated or persecuted, nor could she condone the government’s use of its political authority to deal with innocent and kind citizens.

Remembering Practitioners in China, Opposing the Persecution from Overseas

Falun Gong practitioners in Vancouver have maintained a non-stop, around the clock, peaceful protest in front of the Chinese embassy since August 20, 2001. Ms. Chen is one of the volunteers, and spends one night each week protesting before the Chinese embassy, an activity she has strictly adhered to for nearly eight years since her arrival in Canada.

Ms. Chen initially faced intense pressure, and even her husband advised her not to go, saying, “If you go, you can never come home again.” However, Ms. Chen persevered and gradually her husband came around. He now even reminds her of the time by asking her, “Why haven’t you left?” Ms. Chen has come to understand that everything is linked to her attachments. One can only do well with righteous thoughts and a pure heart.

Besides work and family responsibilities, Ms. Chen spends as much time and effort as she can in activities to expose the persecution. In addition to truth clarification activities before the Chinese embassy, she also does media work and participates as a trombone player in the Divine Land Marching Band. Ms. Chen also actively takes part in a variety of community parades and assemblies.

Now at 60 years of age, Ms. Chen remains energetic despite the few hours of sleep she gets each night. Through her calm, one can see the faith and compassion of a cultivator.

(1) A "sensitive day" is a holiday or anniversary of a historic event on which Chinese citizens gather at public places in large numbers. The persecutors of Falun Gong often harass or arrest Falun Gong practitioners prior to these days, fearing that the practitioners would illuminate the truth about the persecution at the public events.

“A Business Model Based on Morality (Part 2) ”