Member of Congress Frank Wolf: “Freedom Is Coming to China”

I regret that I am unable to join you today but wish you well for a successful rally.

The Chinese government is an equal oppressor and Falun Gong practitioners are among the groups that have suffered the most at the hands of the ruling communist party.

I pray for the day, and it will come, when true freedom, democracy and respect for basic human rights and religious freedom sweeps through China. I remain committed to pressing not only the Chinese government, but also our own State Department, and this administration, to prioritize these issues. 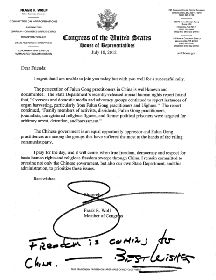 “US Congressman Wally Herger: We Should Boldly Expose and Condemn the CCP's Persecution of Falun Gong in China ”