(Minghui.org) Gansu Women's Prison is the only women's prison in Gansu Province. It is one of the many locations throughout China where Falun Gong practitioners are detained and persecuted by the Chinese Communist regime. Its methods of torture have been growing more intense since it first opened. Although the prison guards are all familiar with the “six bans” against maltreatment of prisoners, such as the ban on using corporal punishment, the ban on torture, etc., they acknowledge that these “bans” are just for display. In other words, they treat inmates in any way they want. Within different wards, guards have utilized such torture methods as hanging prisoners up in unnatural positions, the Tiger Bench, sleep deprivation and prolonged standing or bending at a 90-degree angle. The worst torture takes place in the small solitary confinement room, where most Falun Gong practitioners are tortured in efforts to force them to renounce their belief.

The small solitary confinement room is actually a small building, with small rooms of different sizes. The settings of each rooms are about the same. The outside room has a wooden bed on the left, which is actually several wooden boards nailed together. The surface is rough and full of splinters, and on its border there are iron rings on which to fix handcuffs. The only toilet facilities available to prisoners held in this building is a squatting pan on the side of the bed. Generally, if prisoners detained here are considered good and admit to their “mistakes,” they can lie down on the bed at night, but there is no bedding provided, and their hands and feet are cuffed to the sides of the bed. In summer, prisoners wear thin clothes and the splinters prick them, creating constant pain. If they do not admit their supposed wrongdoings, they are denied the benefit of lying down. 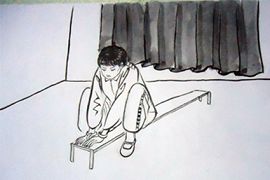 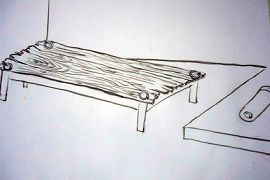 The inside room is where prisoners at Gansu Women's Prison are tortured. There is nothing inside the room except a wooden board in the middle of room, measuring 10cm wide, 1.5m long, and 10cm high. One end has an iron ring for handcuffs. This is called the Tiger Bench. The inside room has a window but no glass. It is covered with iron wire and heavy black curtains, making the room very dark. It is extremely cold in the winter and extremely hot in summer. Someone detained in the inside room is usually forced to sit on the Tiger Bench with both hands cuffed to the iron ring. The skin around the prisoner's wrists will be abraded through within several days. The prisoners are allowed to leave the room to use the restroom and or eat, but otherwise are forced to sit on the Tiger Bench all day long with their legs bent. It is excruciatingly painful. If the prisoner moves his or her body only slightly, the guards will attack the prisoner. After being held in darkness for such a long time, the prisoners cannot even open their eyes when they go outside.

Prisoners are given only two “meals” daily, including a wheat bran bun which is very gritty and half a bowl of plain boiled water. If a Falun Gong practitioner is detained here, the guards will place a TV in the room to play videos denouncing Falun Gong all day long.

The prison administration decides who will be detained in the small solitary confinement room. The usual length of detention there lasts at least seven days, but can last indefinitely. Detention time depends on whether or not prisoners “acknowledge their mistakes.” Once, a Falun Gong practitioner who would not renounce her belief was detained there for two months, during which time she was forced to watch videos denouncing Falun Gong all day long, was not allowed to sleep, and was verbally abused continuously by inmates. When she finally got out of the room, she was extremely pale and she could not open her eyes because she had been in a dark environment for such a long time.

Duan Shengcheng, a former prison director, once said to steadfast Falun Gong practitioners that the solitary confinement rooms were prepared for them. Many practitioners have been persecuted there.

“What “Mental Illness” Really Means in a Communist Regime ”

“Renewed Round of Arrests in Jinzhou City, Liaoning Province ”