(Minghui.org) The Art of Zhen Shan Ren International Exhibition opened at the La Filanda exhibition center in the picturesque town of Loro Ciuffenna, in Tuscany, Italy, on August 3, 2012. Presenting the story of Falun Dafa, a peaceful spiritual practice rooted in the principles of Truthfulness (Zhen), Compassion (Shan), and Tolerance (Ren), the exhibition has been viewed in over 500 cities around the world since 2004.

Despite the well-documented benefits of Falun Dafa, the Chinese Communist regime launched a brutal campaign to eradicate the practice in 1999. The exhibition, locally organized by the Italian Falun Dafa Association, included traditional works of art that showcased the serene beauty of Falun Dafa, as well as the perseverance of Dafa practitioners in China amidst the persecution. The event attracted both tourists and locals, many of whom were deeply touched by the artistry and authenticity of the paintings, as well as the message of courage, hope, and faith permeating the collection.

Loro Ciuffenna, a town of about 6,000 people, is known as one of the most beautiful historical villages in Italy. Many tourists from around the world, as well as residents from nearby towns, come to the area for sightseeing and relaxation, especially during the summer.

The mayor of Loro Ciuffenna, Mr. Piero Lazzerini, attended the opening ceremony with his secretary and local councilor Mrs. Wanda Ginestroni, officially proclaiming the exhibition open to the public.

Upon viewing the displayed works of art, the mayor's secretary told one of the organizers: "I never thought I could be touched so deeply by the paintings. Some of them really impressed me." She looked at the artworks several times, carefully reading the description of each painting. Before leaving, she thanked the organizers for enabling her to learn about Falun Dafa and the persecution in China.

Councilor Ginestroni shared the sentiment. Moved by the art, she said she felt a strong desire to bring everyone to Loro Ciuffenna to see what she had seen. The day after the opening, she came back to the exhibition hall and told the organizers that she had dreamt about the paintings. 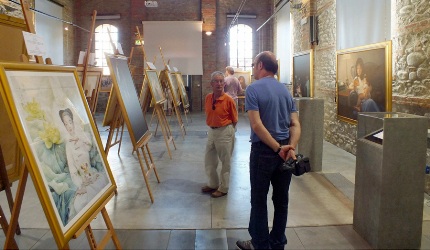 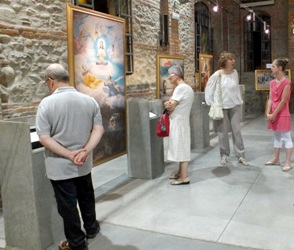 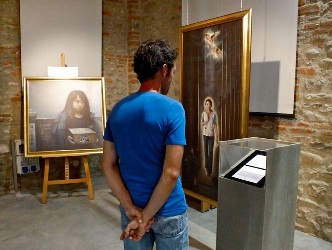 Many visitors drew a parallel between the Christian martyrs and the persecuted Falun Dafa practitioners in China, admiring practitioners' courage and steadfast faith in the principles of Truthfulness, Compassion and Tolerance. Some also commented on the similarities between the use of light-dark contrast in the painting "Tragedy in China" and the works of Michelangelo Merisi da Caravaggio (1571–1610), a famous Italian artist known for using dramatic light-dark shifts to depict realistic human form.

Upon learning of the persecution in China, several patrons expressed regret that they had worn pins of Mao Zedong (the first chairman of the Chinese Communist Party) in the past, having been unaware of the regime's crimes against humanity.

Some people expressed a desire to buy the paintings, and some returned to the exhibition hall several times to share the experience with their relatives and friends. Many visitors also showed interest in learning Falun Dafa exercises and made inquiries about the nearest practice site where they could do so.