A Recycled Newspaper Led Me to Falun Dafa

A Recycled Newspaper Led Me to Falun Dafa

I am an artist who has been living outside of China with my family for over 20 years.

In the fall 2006, I was flattening some old Chinese newspapers for recycling on my desk and was getting ready to practice Chinese calligraphy on them, when an article defaming Falun Gong in a newspaper published by an agency with a close relation­ship to the Chinese government caught my attention. Although my wife and I had heard about Falun Gong before, we had never tried to learn more about it. What puzzled us was why the Chinese government was still discrediting this group in the media after seven years of persecution. According to our knowledge of the Chinese Communist Party and its history, the Party's “enemies” in political movements—even the then president of the country—could never survive their powerful attacks. This time, however, even after years of persecuting Falun Gong, it had not been eliminated like the CCP's previous opponents; rather, it had become more high-profile. Convinced that Falun Gong was a unique and outstanding group, we wanted to learn more about it and started to search for local Falun Gong practitioners and its instructional materials. Before long, we found some local practitioners and obtained a copy of Zhuan Falun.

My family and I read Zhuan Falun with close attention. It explained things that have puzzled humankind for thousands of years in understandable language. More importantly, the book told us how to become a good person and what cultivation is; the answer is simple enough - “Zhen-Shan-Ren is the Sole Criterion to Discern Good and Bad People” (Zhuan Falun, Lecture One). To cultivate is to return to our original, true selves by being a good person following the principle of Truthfulness-Compassion-Forbearance. There was nothing bad in the book as the CCP had said in its propaganda lies about Falun Gong. That propaganda was aimed at covering up the truth and creating hatred. Because we felt sincerely that Falun Dafa was good, we decided to become disciples of Master Li.

We also searched for information on what Dafa disciples should do in the face of persecution. From online sources we found out that practitioners in China had employed many methods to spread true information to debunk the CCP's lies, and often these practitioners were arrested, tortured, imprisoned, or even murdered. Practitioners outside of China used their savings and spare time to produce truth-clarification materials and actively promote public awareness of the persecution to international society. Regardless of where they were, practitioners were working selflessly to let more people know about the great practice and the unjust persecution.

The Story of Mr. Liu Chengjun

Practitioner Liu Chengjun's story moved me the most. In order for fellow citizens inside China to have a chance to access to the truth, Mr. Liu and several practitioners with advanced technical skills intercepted TV signals and put some documentaries about the Falun Gong persecution on the cable television system in Changchun. The 50-minute-long interception allowed thousands of Chinese people to learn the truth about persecution of Falun Gong. When I read about Mr. Liu's story, it was already several years after he had been tortured to death because of his bravery. Along with Mr. Liu, practitioners Liang Zhenxing, Lei Ming, and several others were brutally murdered by the CCP for their peaceful appeal activities. I was moved to tears by their stories in which they had dedicated their lives to safeguarding the truth of the universe. In the photos of Mr. Liu during torture intervals, I didn't see any hatred in his eyes in spite of what he had experienced, only peace and compassion. All he wanted was to let more people know the truth about Falun Gong.

In 2010, we watched the Shen Yun show, which struck me with its purity, serenity, and power. This was a true embodiment of Chinese traditional culture. The Mongolian dance by a group of male dancers moved me the most as their beautiful and vital movements really brought me the feelings of joy and happiness from the people that live on the vibrant Mongolian grassland. Their power was so strong that it could reach the heavens, and it inspired me to create this ceramic statue. 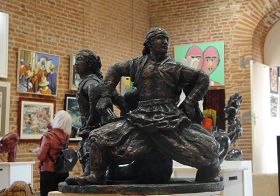 Three heroic and courageous men form a strong circle that can't be broken. The sculpture was exhibited at the 33th Midi-Tarn-et-Garonne Art Exhibition in 2011.

“Details Regarding the Persecution and Death of Mr. Zhao Shenxing from Wu'an”