(Minghui.org) Helsinki Seaside Park is a must-see scenic spot for visitors. It is also a lovely recreation place for locals in the summer. Usually there are activities held on the weekends by Finnish Falun Gong practitioners in the park, which has allowed numerous visitors to learn about Falun Gong and the persecution.

Walking along the crowded avenue, visitors can see banners that read: "Falun Dafa around the world" and "Calling for an end to the persecution of Falun Gong." Next to the signature collection table there are several display boards. Near the display, a group practitioners demonstrate the Falun Gong exercises.

Many people stopped to watch the peaceful exercises. Upon viewing the display boards, many were shocked by the cruelty of the persecution in China. 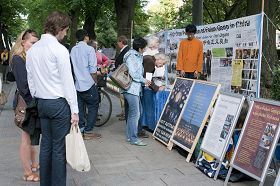 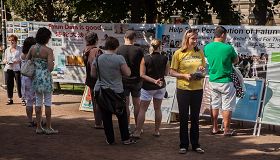 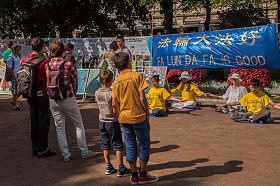 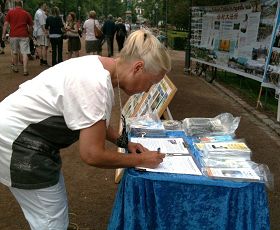 Being shocked by the content of the display boards, Ms. Marsa, a Finnish woman, said that the pictures exposing the Communist regime’s persecution of Falun Gong really touched her heart, and she felt very sad. She asked if she could take a picture of the banner. "What can I do for Falun Gong?" she asked earnestly. When she learned that the practitioners were collecting signatures against the persecution, she signed the petition immediately. Before leaving, she tightly hugged the practitioners and wished them every success with what they were doing. She encouraged them to keep up with their efforts until the persecution ends.

From time to time there were Chinese tourists passing by. Most of them wanted to learn the truth behind the persecution. Some of them accepted the informational material in Chinese. Some wished to renounce their memberships to the Chinese Communist Party (CCP) and its affiliated organizations and asked practitioners to help them post their online statements.

Two young men took the informational material when passing the site. After talking with a practitioner, they agreed to quit the Chinese Communist Party organizations.