(Clearwisdom.net) Today's news from China includes incidents of persecution that took place in 14 cities or counties in 11 provinces. In this report, 6 practitioner were subjected to mistreatment during their detention, and at least 23 practitioners were illegally arrested. 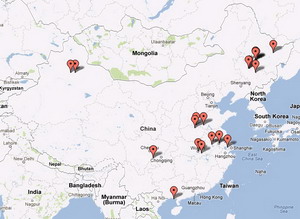 On July 24, 2012, led by Xu Yunfeng, head of the Halahai Police Station and Zhang Jianwei from Halahai Town, police broke into the home of Ms. Qi Yunfeng. They arrested Ms. Qi and took away her Falun Gong books and a copy machine.

On the afternoon of July 26, 2012, Xu Yunfeng, head of the Halahai police station and the head of the Nongan County Police Department, along with more than 40 policemen went to Ms. Zhao Chunxia's home. Pointing five machine guns at it, the police broke through the security door. Ms. Zhao 's husband was hit in the head and lost consciousness. Her daughter was threatened and lost consciousness as well. All three of her family members were taken away.

On the evening of July 26, 2012, police went to Ms. Yang Xiuyun's house. Ms. Yang was not at home at that time. They took away a cell phone and an MP3 player.

At 2 a.m. on July 26, 2012, police came to the home of Mr. Li Yaoxiang and left after his daughter and daughter-in-law questioned them.

Mr. Huang Hailin from Huandiqiao Town was arrested at home around 3 a.m., on July 27, 2012. Police involved were from the Daye City “610 Office” and the Huandiqiao Police Station. They broke the door and window of Mr. Huang's home and arrested him. They also took away his Falun Gong books, informational materials and some electronic devices.

They took away her computer, TV, the satellite dish and other personal belongings. Zhang Yinduo, head of the Domestic Security Division, viciously tore a picture of the founder of Falun Gong, Master Li, off the wall. When they arrested Ms. Guo, they didn't even give her time to put on her pants or socks. Ms. Guo is currently in the Yilan County Detention Center.

The key person involved in the persecution:

Mr. Xu Shengli was arrested on the morning of April 9 while he was on his tricycle delivering waste products. He was intercepted by policeman Xu Chuan from the Suiquan Police Station and was taken to the police station. Police searched his home and took away his PC, printer, picture of Master Li, as well as other personal belongings. Mr. Xu was later sent to the Shuangcheng City Detention Center and was not allowed to be visited by his family for more than three and half months. On July 27, his family received the court notice and was informed that he was illegally sentenced to 7 years in jail.

Mr. Li Shenggu, 80 years old, was arrested on the morning of July 25, 2012 while he was distributing informational materials in Nanguan, Shan County. Police from the Nandianzi Police Station arrested and took him to the police station. They body searched him and took his house key. They searched the old man's home and took away his Falun Gong books. Mr. Li's children went to the police station to reason with the police over the old man's arrest. Mr. Li was released around 8 p.m. that same day.

Ms. Yang Derong, over 60 years old, was arrested around July 23, 2012 by police from Xiaoxijie Police Station. Her current whereabouts are unknown.

Mr. Jin Jianxin was arrested on May 17, 2012 by officers from the town police station and the Domestic Security Division. His home was searched and his personal belongings were confiscated. On the same day, Ms. Lu Xiuzhi, the wife of a Falun Gong practitioner named Zhou was arrested as well. The police took a large amount of cash from their home. Mr. Jin and Ms. Lu are currently detained in Sanlizhuang Prison.

On May 18, police called the wife of Mr. Jin who was not a Falun Gong practitioner and lured her to the police station. As soon as she came to the police station, she was put into handcuffs and shackles and was tied up to a tree for five days without being provided with any food and water. Under such torture and against her conscience, she gave the names of some practitioners. She was later sent to the detention center and was detained for another 10 days.

On May 31, two practitioners with the last names of Fan and Ma respectively, were arrested by police from Xingyang Domestic Security Division and Gaochun Police Station. Mr. Fan's home was searched and his personal belongings such as cell phones, PC and Falun Gong books were confiscated. Mr. Fan and Mr. Ma were held 15 days in the detention center. Mr. Fan was then sent to Baimiao Forced Labor Camp in Zhengzhou City. Mr. Ma was released on July 8.

Ms. Wang Xiulan and Mr. Zhu Xingfu went out to speak with people about Falun Gong on the afternoon of July 28, 2012. They didn't come back that day. They are currently detained in Chengbei Police Station.

On May 10, 2012, Mr. Wang Zhengyu was arrested and detained in Tangyuan Police Department. Ms. Bai Guiqin went to the police department several times to ask for her husband's release, but the police refused to release him.

On the afternoon of July 12, police from the Tangyuan Domestic Security Division broke into the couple's home. They confiscated their bank book with 37,000 yuan on it. Although Ms. Bai Guiqin was just diagnosed with three tumors in her womb, they still arrested her and sent her to Jiamusi Detention Center. They also arrested Ms. Bai's younger sister.

Ms. Wang Fengyun was arrested at her home on July 24, 2012 and sent to a brainwashing center

Ms. Gu Dongmei was reported to police while she distributed informational materials about Falun Gong at a farmers' market. She was arrested after she returned to her mother's house. She is currently detained in Wushu Domestic Security Division.

Ms. Yuan Jiaqin was arrested at home on July 26, 2012. She is currently in Hefei City No. 1 Detention Center.

Ms. Tan Sezhen was arrested on the morning of July 28, 2012 and is currently in Beihai No. 1 Detention Center. On the afternoon of the same day, Ms. Mo Deqing was arrested at her sister's home.

Ms. Ma Xiuhua was arrested on July 29, 2012 while she was distributing Shen Yun Performing Arts DVDs. She was sent to Yinchuanlu Police Station, and is now in Liudaowan Detention Center.