(Minghui.org) Since Kailuan No. 10 Middle School teacher Mr. Bian Lichao was arrested on February 25, 2012 for his belief in Falun Gong, he has been interrogated and illegally fined by the police. On July 26, he was put on trial in court. When his wife, Zhou Xiuzhen, came to the court she was barred from attending the hearing as Mr. Bian’s spouse, because she had sought justice for him.

At 8 a.m. on July 26, 2012, when several of Bian Lichao’s relatives and friends arrived at Tangshan City’s Lunan District Court House, they saw more than ten police cars positioned around the block, and plainclothes police were everywhere, both inside and outside of the court building. They even saw plainclothes officers in the neighboring residential buildings. 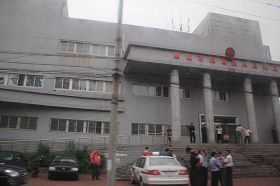 When Mr. Bian’s wife and lawyer came to the court at 8:45, they were met by two men, the principal and Party secretary of Kailuan Number Ten Middle School (Bian Lichao and Zhou Xiuzhen both work there). They had been sent by the authorities to monitor Bian’s wife during the hearing.

When Zhou Xiuzhen (Mrs. Bian) and the lawyer arrived at the security check point, a police officer stopped them. After a few minutes, a middle-aged man invited the principal and the Party secretary into the court room. The man then told the lawyer and Zhou Xiuzhen to come in. Judge Wang Jian told Zhou Xiuzhen that she was there not as Mr. Bian's spouse but as a witness, because she had been arrested along with her husband. As a witness, all Zhou Xiuzhen could do was sit outside of the courtroom in the lobby, monitored by her school's principal and the Party secretary.

During the hearing, Ren Weijian from the Lunan Public Procecutor Office read a list of so-called evidence. Mr. Bian questioned him: “They used my wife and daughter’s safety to blackmail me. If I refused to admit to the charge, they threatened to arrest them. They refused to listen to my story, and told me I could only answer yes or no to their questions. They also fabricated evidence against me.”

Mr. Bian’s lawyer rebuked the charges one by one. But his defense was interrupted repeatedly by Judge Wang Jian and the juror. At one point, Wang Jian told the lawyer: “We have warned you twice already. If you dare to say Falun Gong is a belief issue one more time, I will take measures against you.”

The public prosecutor offered nothing new in the hearing. But every time the lawyer requested the court allow key witness Zhou Xiuzhen to speak, he was denied and no reason was given. When the lawyer announced that he had new evidence, the judge and juror visibly panicked and decided to have a recess.

Ten minutes later when the hearing reopened, the lawyer provided new evidence: a recorded testimony by Zhou Xiuzhen who said that the police collected evidence using illegal means, and extorted 100,000 yuan in cash from her.

Facing solid new evidence, prosecutor Ren Weijian strongly denied the charge. In an effort to divert the subject, he argued that Mr. Bian Lichao produced a large quantity of Shen Yun DVDs (a classical dance performance) and posters, and recommended Mr. Bian be sentenced to 7 to 15 years of imprisonment. The defense lawyer offered a strong rebuttal, telling the prosecutor that charging Falun Gong practitioners with “utilizing an 'evil organization' to undermine the law” is totally groundless as no laws were broken by the practitioner and Falun Gong is known to promote traditional values and morality.

During the hearing, Mr. Bian and his lawyer were interrupted by the judge more than 20 times. The lawyer was not deterred by the judge’s intimidation, and offered a strong defense till the end.

Zhou Xiuzhen sat in the lobby during the entire hearing, and was not allowed to enter as Bian’s spouse. At 11 a.m., when she took out her cell phone Ma Ruyun, the Court’s party head immediately sent four police officers to check it and told them, “If she has taken any photos, make sure they are deleted.”