(Minghui.org) The Divine Land Marching Band consisting of Falun Gong practitioners in Taiwan was invited by the Regional Support Association in Okinawa, Japan to perform on June 20, 2012 for cultural exchange through music with local people and introduce Falun Gong to them. 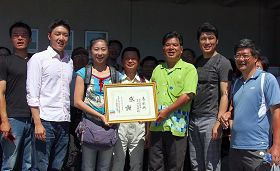 The Divine Land Marching Band obtains an appreciation plaque from the Director of the Governing Association for its performance in Okinawa, Japan.

Okinawa is located at the southern tip of Japan and is about 642 kilometers from Taiwan. It takes seventy-five minutes from Taiwan to Okinawa by airplane. 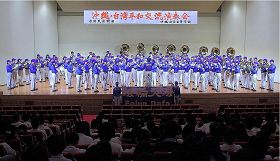 The band performs Flower, Tears for you and Delivering Treasures to Okinawa High School students

The director of the Regional Support Association in Okinawa said, “Taiwan has close relations with Okinawa. We hope peace will last through the exchange of culture and music.”

On June 21, the band performed Tears for You and Flower for the Association for Welfare of Handicapped Persons in suburban Naha, the capital of Okinawa. Local people were familiar with these two songs and clapped along with the music. The band then played Falun Dafa is Great and Delivering Treasures.  The audience members were touched.

A local resident said, “This is my first time to listen to a performance by such a large band. My whole body felt great.”

After the performance, the director of the association expressed his appreciation to the band. He said, “Your music is so touching. This is my first time to listen. All my sweat pores are opened and felt the energy from every musical note.”

A reporter from a local Okinawa newspaper came to cover the event, and the paper carried a report the next day.

The president of a local university participated in the Okinawa cultural exchange activities in Keelung, Taiwan in December 2011 and was impressed with the band. When he learned that the band would come to Okinawa, he invited it to perform at the Concert Hall of the Central Community Center in Tomigusuku for teachers and students. 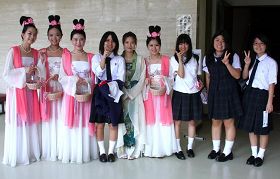 On June 23, the band was invited to play at the Tsushima Maru Memorial Museum. After the performance, three ladies expressed their appreciation to the director. They said they were delighted and touched by the superb performance of the band. 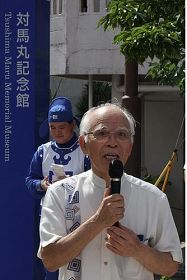 The director of the Tsushima Maru Memorial Museum said, “We'd like to thank the Divine Land Marching Band for bringing such graceful music here. Its performance is outstanding!”

The band came to Okinawa's most famous attraction – International Avenue. Here the visitors were bustling. Shopkeepers in the surrounding stores were full of praise for the performances of the band. Many of them said they'd never seen such a large band and looked forward to seeing it again in the future.

On June 24, the band drove to a nearby scenic site, Lily street. The street and the adjacent ones were not spacious, but there was a steady stream of tourists and tour buses. The band performed on the square in front of a store by invitation.   The performance drew many tourists to stop to listen, and many visitors gave warm applause after listening.

At the end of the performance, a nicely-dressed lady excitedly ran up and requested to have a group photo with the band. She said she was from Taiwan and married to a man in Ryukyu for more than thirty years. From newspaper, she learned that the band would come to Okinawa to perform. She listened to the band performance the day before in Naha and was touched. She then followed the band to listen to more performances.  She said: "If I missed this opportunity, I do not know when I will have another one."

On June 25, in the early morning, more than one hundred Falun Gong practitioners with yellow T-shirts reading, "Falun Dafa is good" practiced their exercises in a local park. 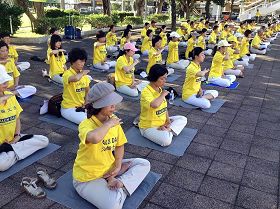 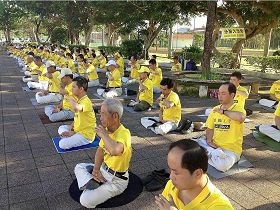 An 81-year-old lady was walking in the morning and heard the exercise music. She felt great in her whole body and sat down to watch the practice. After learning there would be practitioners there to offer free teachings, she said excitedly, “It is near my home. I can come every day.”