(Minghui.org) There are usually three prison guards in charge (called brigade chiefs) of every work brigade at Jilin Provincial Women's Forced Labor Camp. One manages miscellaneous details, the second is in charge of persecuting Falun Gong practitioners and the third is responsible for ensuring profits from the forced labor of detainees. Driven by greed, these officials are very active in soliciting potential work contracts. Projects are brought in that are very elaborate and the work required is very painstaking, dirty, labor intensive, or very demanding on one's eyesight. Due to overseas Falun Gong practitioners' efforts in exposing the forced labor trade in recent years, incarcerated Falun Gong practitioners now don't accept those labor intensive duties. The products are usually export goods, as the labels and packaging are all in foreign (non-Chinese) languages.

Every day the detainees at Jilin Provincial Forced Labor Camp are given assignments. Young or old, healthy or not, the laborers are forced to work, and are not allowed to rest even when ill (unless they become bedridden.) There is hardly any break all year round and there is no rest on weekends. The only time off is a few days around the Chinese New Year and Chinese National Day.

Below is information about some of the products made within the past two years under forced labor at Jilin Provincial Women's Forced Labor Camp.

The work flow consists of first shaving off redundant parts from the white foam ball, polishing it and painting it with yellow glue, then gluing blue-dyed feathers (possibly from geese) to the ball. Finally, four peacock feathers are glued on. These balls have been in production for a long time. 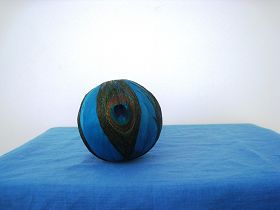 Peacock feather ball with diameter of about 10cm. 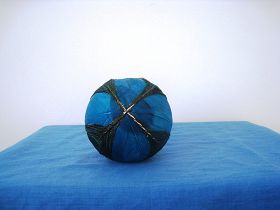 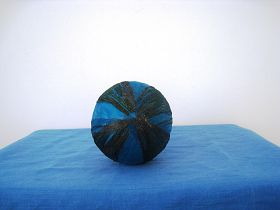 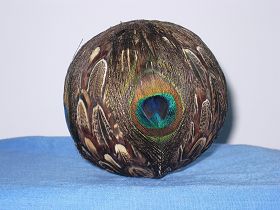 Peacock feather balls with a diameter of about 10cm. The work flow is the same as above, with the goose feathers replaced with chicken feathers. 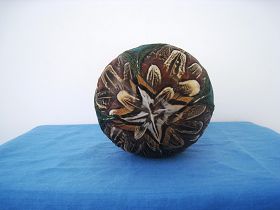 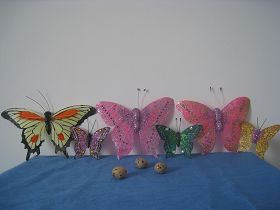 Making butterflies involves first picking out the dyed feathers of the appropriate color, attaching them to wide clear tape, then stamping the tape with the butterfly wing shapes and cutting the shape out with scissors. Some wings need to be painted with water color paints, some need to be brushed with white glue and then sprayed with colorful golden powders, and some are glued with beads of different colors. The body of the butterfly is made from molded foam, polished with scissors or blades, then painted with colors. After drying out, two slits for the wings are melted out with soldering iron. Two eyes are pierced at the head position with needles, and two plastic antennae are attached and the eyes painted white. Finally, the wings are brushed with glue and inserted into the body. A variety of butterfly designs and sizes are produced. These have also been made for a number of years.

3. Other types of balls 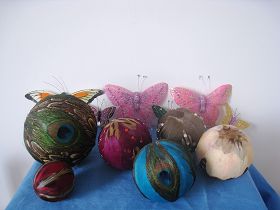 These balls (diameter 7cm or 5cm) were once made in small quantities. It has been reported that they were once exhibited at the Shanghai World Expo.

Workers are exposed to a number of toxins in making these products. The first is feathers. The feathers arrive in bags. The bags are opened and poured out on the ground prior to picking out suitable feathers. These are sprayed with water and put into a big plastic bag. Two people take turns to sieve off dust and smooth out the feathers. After that the feathers are poured out to be hand picked. The whole process is very messy. Some workers bought surgical masks to wear or covered their hair with towels. Hand picking the chicken feathers is even more challenging as the first step is to take out the small fluffy feathers one by one. The feathers are piled on the ground inside the room, with the windows closed in summertime (to avoid the feathers being blown about by the wind). A strong odor permeates the entire room and the workers must stay in the room for hours at a time. The feathers were very dirty and are also toxic, as preservatives are mixed with them.

The second toxin is the gold powder. The golden powders sprayed during the manufacturing of butterflies produce severe effects on the respiratory tract. Moreover, the powders stick to the body and are not easy to wash off. After finishing the work, the face, neck and hands are all shiny with the powder. Those with sensitive skin are affected the most.

The third toxin is glue. The bucket containing glue weighs dozens of pounds, with a height of 60cm and a diameter of 40cm. It takes a lot of strength to carry the bucket to the upstairs work room. The glues include yellow-and-green glue and white emulsion glue, with an irritating odor. Because the windows are closed for fear of the wind blowing the feathers, the toxic glues are inhaled by the workers. After a period of time, people feel short of breath, nauseated, and experience chest distress. When applied to foam, the glues dissolves the foam instantly. When the glue comes in contact with workers' skin, it is necessary to try to remove it immediately.

Since the workers are given no personal protective gear whatsoever, these pollutants cause great harm. For instance, Ms. Ma Sufen (in her fifties) was applying glue to feathers on March 16, 2010, when her eyes became severely irritated. Shortly afterwards, the top of her head became numb, followed by numbness on the sides of her head. Her forehead developed blisters, along with her eyes swelling to the point that she could only open them as slits. She didn't recover even after two days of intravenous drips. Ms. Zou Yufang (in her sixties) developed an infection on one of her index fingers while working with the feathers and also had to receive IVs. When making butterflies, Ms. Wu Fengxian's whole body had patches of skin rash which became unbearably itchy after exposure to the gold powders. In October 2009, a practitioner who went to appeal for Falun Gong was brought in to the labor camp. It was claimed that the labor camp did a medical examination on her but didn't find out that she was pregnant at the time. During that period of time, anyone working with the glue inside the workroom would have chest distress and would experience nausea and vomiting. This practitioner was later found out to be pregnant before the Chinese New Year and subsequently released. 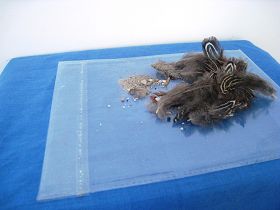 Chicken feathers before fluff removal. The sand-like particles and powder are believed to be preservatives. A lot of these materials are left behind after picking out the feathers. 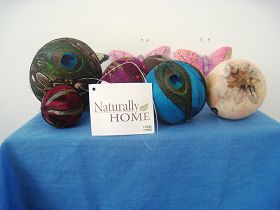 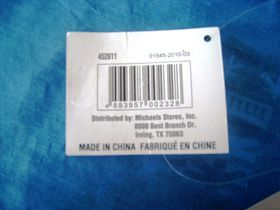 The back of the label pictured above reads, Distributed by: Michaels Stores, Inc., 8000
Bent Branch Dr., Irving, TX 75063 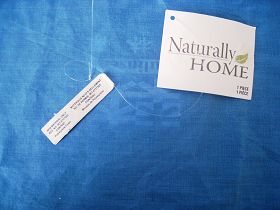 One of the pickup vans for raw material transportation has plate number Beijing LC3256.

The bird eggs in front of the the butterflies pictured above are also made at Jilin Provincial Women's Forced Labor Camp. To make these, first the white foam is molded and polished (this task is very demanding as the eggs are tiny, about 1cm size, and are very difficult to handle). The eggs are painted white, and pinned with toothpicks to foam to dry out. Then they are sprayed with brown dots. Finally the toothpicks are taken off and the holes filled. This kind of work came infrequently, but once it came it usually required large quantities. 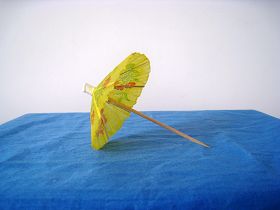 This type of umbrella is a product from the early period of forced labor. The umbrella handle was about 10cm long. The cloth was used to manufacture Japanese women figures in kimonos, likely exported to Japan. Since the figures were very small, it is very tedious and stressful to the workers' hands and eyes to make the figures' matching clothes, shoes, hats and umbrellas. Shortly after doing this work, some workers who originally had very good eyesight suffered a rapid deterioration in their vision. The work requires elaborate and delicate handling, and cannot be done at a hurried pace. Some workers could not finish their work quotas and experienced tremendous stress. In the past few years, this kind of umbrella has been spotted in table decorations in restaurants.

At present the Jilin Provincial Women's Forced Labor Camp has become less aggressive with their slave labor production due to all of the domestic and international exposure. However, detainees who refuse to do the slave labor are threatened with an extension of their prison terms, and those who work slowly are verbally abused.