1. Reading, Memorizing, and Copying the Fa

To encourage Falun Gong practitioners to make further advancement in their cultivation, Master wrote the following poem for the practitioners in Changchun on September 15, 1994:

“Ordinary people do not understand the pain of cultivation,
Happiness to them is vying and competing;
Cultivate, my disciples, ‘til no single omission is found,
And with the passing of all adversity,
will come the sweetness of true joy.”
(“Cultivating Amidst the Delusion” in Hong Yin)

On October 8, 1994, Master wrote another poem to the practitioners in Changchun:

“Study the Fa and gain the Fa,
Focus on how you study and cultivate,
Let each and every thing
be measured against the Fa.
Only then, with that,
is it actually cultivation.”
(“Solid Cultivation” in Hong Yin) 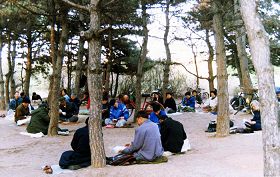 Group Fa-study and discussion after the exercises

Falun Gong practitioners consistently studied the Fa individually and as a group, thus forming a stable and pure cultivation environment. Many practitioners hand-copied and memorized the Fa. One of them wrote in his experience paper, “When I memorized the section 'Truly Guiding People Up to High Levels,' I felt like it was the first time I had read it. There was endless and profound meaning in it. I felt that my head was too small. If I didn't break through the mindset of everyday people, I wouldn't be able to accommodate such profound Buddha Law. Sometimes I felt that something was growing upwards in a spiral from the top of my head. After that, I often felt this way when I memorized the Fa. I felt that all of my internal organs, even my smallest cells, were excited.

“When I reached the section 'The Falun Emblem' in Lecture Five, I gained deeper understandings of what Master said about 'how the human society being in the very middle, in the outermost layer, and on the outermost surface.' I saw many things behind Zhuan Falun. I seemed to understand the structure of layers and layers of universe and felt the vastness of the universe. Like the endless universe and cosmic bodies, my thoughts quickly extended to infinity, as if a new dimension had been unfolded in front of me.”

Another practitioner copied Zhuan Falun 14 times and other lectures five times. This was very common in our Fa-study group. This practitioner could tell us where any paragraph was located and even the page number. We memorized all of Master's scriptures as soon as they were published. Almost everyone in our group had memorized any given scripture the day after it was published, no matter how long it was. It was a great Fa-study environment. The Chinese Communist Party's (CCP) Propaganda Department banned the printing of Zhuan Falun for a period of time, so we would give our neatly hand-copied Zhuan Falun to new practitioners. 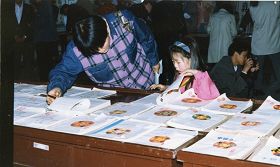 From December 29, 1997 to January 3, 1998, 83 practitioners from Taiwan, the United States, Canada, Australia, Japan, and Indonesia went to Changchun for an experience-sharing gathering.

During those five and a half days, overseas practitioners exchanged experiences with Changchun practitioners about Fa-study, cultivation, eliminating interference, and spreading Dafa. They had group Fa-study in the evening. They braved snowstorms to take part in the morning exercises and large promotional activities during the New Year holiday. They also went to Shengli Park and Jilin University to hear veteran practitioners recount how Master first introduced the Fa to the public in Changchun. Local practitioners were very encouraged to learn from overseas practitioners that more than 2,000 people in 17 cities in Taiwan had started to practice Falun Gong, as well as how Dafa was quickly spreading in the United States, Canada, Australia, and other countries. 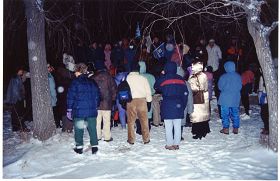 On November 20, 1994, the first experience sharing conference for practitioners in Changchun City was held at Mingfang Palace, Jilin University. In the conference room, which could hold over a thousand people, all the seats were filled. 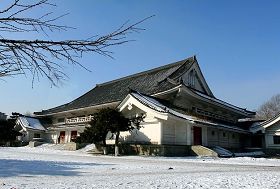 An elderly man talked about how he and his wife believed in Master and Dafa. They encouraged each other in their cultivation and overcame tribulations together. They stated that Dafa was supernatural and miraculous.

A postgraduate student shared how she let go of her attachment of vanity as she practiced Falun Gong.

All participants benefited from the experience sharing and many were moved to tears. At the same time, they were determined to cultivate Dafa until consummation.

Several of the sharing articles from this conference were collected in a publication “Cultivation Stories of Falun Buddha Law.”

Master talked about this sharing conference in “Talk in Guangzhou to Some Assistance Center Heads From Around the Country” in Explaining the Content of Falun Dafa:

“Changchun has made a videotape in which the students had lively speeches and the students in the audience were also excited—some even shed tears. They were really happy because the meeting was made lively and the atmosphere was great. It’s just like what one of you said just now—that in that field, nothing was missing except that I wasn’t there. It’s just like when I hold seminars, the field is very strong. You could say that it’s a Falun Gong gathering, and it’s similar to a Fa conference, so the effect is excellent. When we have a lot of students in the future, the students can do it this way and talk about their experiences and understandings. Studying the Fa like this is very educational. Students talk about what they’ve gained after learning the practice. In some ways this is even livelier than our speeches.”

This was the first Falun Dafa experience sharing conference ever held. Buddhas and Gods in the universe were with us. After Master introduced the Fa two and a half years before, practitioners made improvements in every possible aspect.

Extraordinary things happened during this conference. The weather was unusually warm and sunny for an early winter day in Northeast China. Even the trees around the conference sites looked brilliant. As practitioners entered the conference site, shining saucer shaped clouds also entered above people's heads. Some practitioners with their celestial eyes open could see Buddhas and Gods coming in, too. The extraordinary scene was recorded and played back in every Fa-study group in Changchun. These things were witnessed by the veteran practitioners. 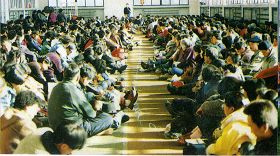 A large Fa conference was held in the Track and Field Stadium of Jilin Institute of Physical Education in Spring, 1996.