From Refusing to Listen to Becoming a Dedicated Practitioner: Mr. Sun and Falun Dafa (Photo)

(Minghui.org) Mr. Sun is a new Falun Dafa practitioner who has been practicing for just over a year. He has deep feelings of gratitude when talking about his experience of obtaining Falun Dafa. 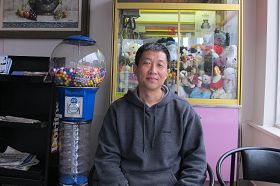 Mr. Sun in his pizza shop

Over ten years ago, Mr. Sun immigrated to Canada from a big city in China. At that time, he already knew about Falun Dafa but had no deep impressions of it because he regarded it as ordinary qigong and physical exercise. Later, the Chinese Communist Party (CCP) began to persecute Falun Dafa, and now much of the world knows about it.

Mr. Sun said that back then he did not like the CCP, but he also disagreed with Falun Dafa because he saw some practitioners protesting in front of a Chinese consulate. He thought that China was getting stronger and that the protesters were an embarrassment to the country. In addition, the CCP's propaganda that slandered Falun Dafa gave him the impression that those practitioners were allied with overseas anti-Chinese forces and that they were doing bad things.

"Because of my understanding then, I would not listen to the practitioners who wanted to clarify the truth to me," said Mr. Sun. This went on for over ten years.

Inspired by One Article

"However, I sometimes read the Epoch Times," he said.

One day, Mr. Sun read an article in the Epoch Times. The article pointed out that Chinese people often believe whatever the government says, that they do not try to analyze the facts on their own, while Westerners, when they encounter a problem, study the issue on their own and then draw their own conclusions. “I thought that the article was correct. I did not know Falun Dafa. I felt that I should learn about it myself since I was living abroad and it was convenient for me."

Mr. Sun remembers that it was in March 2011 when he visited the Minghui website for the first time. He then began reading the writings of Master Li Hongzhi. Everyday he worked in his shop during the day and visited the Minghui website at night. Sometimes he stayed up very late reading, but he did not feel sleepy. He soon finished reading all 38 books by Master Li Hongzhi.

Understanding Everything after Reading

"I understood everything," Mr, Sun said. "At that time, I had nothing in my heart but regrets. It was too late to learn Falun Dafa. Why didn't I read the writings earlier?"

Mr. Sun said that, after finishing reading Master's 38 books, he had a feeling of sudden recollection. He felt his compassion was inspired right away. He knew Falun Dafa was very good and that Master's every single word was to teach people to be good and kind to others. This was the truth, he thought, the universal truth! He felt as if the CCP's indoctrination of his mind was cleaned out all at once.

Mr. Sun was very worried because he had not come to understand the truth until after Master had been spreading the Fa for many years. He thought that he had been wasting his life and must now strive forward in the course of his cultivation.

"Then I went to Vancouver's Chinatown, bought Zhuan Falun and the Great Consummation Way of Falun Dafa, and learned the exercises at home according to the photos in the Great Consummation Way of Falun Dafa. I started to search for Falun Dafa group exercise sites and found that the nearest site to my home was located at Burnaby Library. The exercise time at this site was 5:30 a.m. to 7:30 a.m., which was too early for me since I went to bed late every night. In the end, I chose to go to the exercise site at Queen's Park, which was from 10 a.m. to noon on Saturdays."

He met other practitioners in Vancouver, and ever since then he has been part of the single body of Dafa cultivators.

Before, Mr. Sun was a kind person and got along well with others. He always smiled at people and maintained good relationships with others. However, he said that he still experienced a relatively great change after beginning the practice.

After learning Falun Dafa, Mr. Sun came to understand many principles, and now he looks at issues and deals with things from a different perspective than before. He said that, before practicing Falun Dafa, the relationships in his family were tense. His wife and his mother did not get along, and he was caught in the middle. It was so difficult for him that he almost divorced his wife. After practicing, he remembered that Master teaches us to look inward, think of others first, and be tolerant when encountering issues and conflicts.

Mr. Sun said, "I want to follow what Master says and be strict with myself. I share more household chores and do them well. When my wife disagrees with me, I do not argue with her, disapprove of her, or defend myself. Instead, I try to think about the situation from her perspective. While things do not always go smoothly, I do not get angry. Gradually, the situation at home became harmonious. Now my wife is very supportive of my cultivation even though she does not practice."

Mr. Sun's father was once a landlord and was persecuted by the CCP. However, he believed the CCP's lies and objected to his son's practicing Falun Dafa. Mr. Sun did not argue with his father, and instead he installed an antenna in his parent's home so his father could watch New Tang Dynasty Television (NTDTV), which dares to speak the truth. His father now understands the truth and does not object to his son's practicing.

Mr. Sun said that, before practicing, he thought only of how to make more money in order to make a better life for his family. He often thought of himself first. Since obtaining Falun Dafa, he now understands that life's blessings are actually predestined. If something is his, he will have it. If something is not his, he should not fight for it. Hence, he just follows the course of nature and encounters fewer conflicts.

Mr. Sun mentioned that, in the past, one of his relatives borrowed a lot of money from him and had not returned it after a long time. Since practicing, Mr. Sun has straightened out his thinking and no longer asks the relative to return the money; he let it go from his heart.

Mr. Sun owns a pizza shop, and his attitude toward the business is to do everything well and treat customers kindly rather than only thinking of how to make money. Therefore, he is at ease and happy.

Mr. Sun also hopes that his customers can come to understand the truth about Falun Dafa. Thus, he puts Falun Dafa's truth-clarification materials in his store and the music of Pudu and Jishi echoes throughout the store.

Obtaining Falun Dafa Late and Trying Hard to Catch Up

Although Mr. Sun is a new practitioner, having obtained Falun Dafa only over a year ago, he has good enlightenment quality and understands Master's words quickly without many mental obstacles. He often says that he obtained Falun Dafa late and needs to be more diligent and cherish this opportunity given by Master. In addition, he urges himself to spare no effort in clarifying the truth since many Chinese, just as he, himself, before, still do not know the truth about Falun Dafa.

In his 50s, Mr. Sun is as energetic as a young man, and he takes good care of his business. In addition, he volunteers to deliver the Epoch Times. If he has spare time, he goes to the Chinese consulate to protest the CCP's ongoing persecution of Falun Dafa, plays tuba in the Divine Land Marching Band, and tries his best to promote Shen Yun Performing Arts. He has not been left behind.

“US Practitioner: My Cultivation Path and Personal Experiences ”

“Italy: Florence Provincial Council Adopts Resolution Calling for an End to the Persecution of Falun Gong ”