(Minghui.org) Practitioners in Philadelphia, the birthplace of democracy and freedom in the U.S., held a rally in front of Liberty Bell Plaza on July 21, 2012. Thousands of tourists, especially tourists from China, learned the truth about Falun Dafa, the brutal persecution by the Chinese Communist Party (CCP) and practitioners' 13-year peaceful efforts to end that persecution. 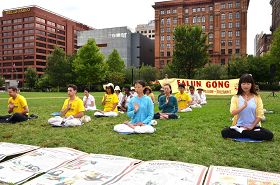 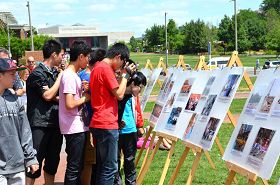 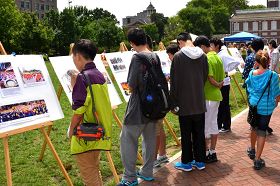 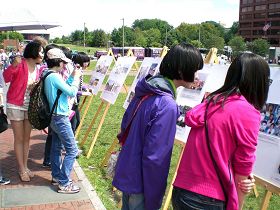 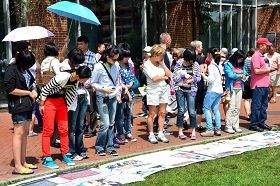 At Liberty Bell Plaza, one of the most famous tourist attractions in the U.S., Falun Gong practitioners put up display boards, made speeches, demonstrated the Falun Gong exercises, collected signatures and passed out informational materials. They wanted to let tourists know the grace of Falun Dafa and be aware of the CCP's persecution. They also helped Chinese tourists to register their withdrawals from the CCP organizations.

Several hundred high school students from China came in tour buses to visit the Liberty Bell. They were curious upon seeing the Falun Gong activities. They earnestly viewed the display boards, asked for informational materials, took photos and videotaped the displays. Some asked practitioners to help them renounce the CCP organizations. Twenty-one Chinese people quit the CCP on the spot.

Senator Pat Toomey wrote in his letter that he is very concerned about the reports of Falun Gong practitioners in China who have been deprived of their faith and freedom of expression. As a co-sponsor of Senate 232 Bill, he still firmly believes that the U.S. government has an obligation to denounce the Chinese government's human rights abuses of all citizens, especially Falun Gong practitioners.

Representative Mike Fitzpatrick stated in his letter that the persecution of Falun Gong in China is a very serious problem, and we must not sit idle. For those who struggle for freedom to practice their own spiritual beliefs, his heart is with them. He said that the United States cannot tolerate flagrant violation of human rights in the world; we must stand up for what we believe and do the right thing!

Representative Robert Andrews wrote that 13 years ago, the Chinese government began a systematic persecution of Falun Gong practitioners, seeing the practice as a threat to the communist ideology. Because of China's lack of freedom of belief, the U.S. Secretary of State has designated China as a “country of particular concern” for more than a decade. Beijing's persecution of its citizens is not limited to one faith or spiritual group. Therefore, he supports this rally that calls for attention to the 13 years of persecution of Falun Gong practitioners.

Ms. Zhou from Hangzhou City, China came to visit the Liberty Bell and told a practitioner, “I have seen these things in China. Under that dictatorial regime, China cannot change for the better. Common Chinese people do not recognize the Communist Party anymore, and neither do its own members. Everyone curses it. Without the CCP, we would live much better.”

Mr. Steve Libimbi is an associate professor of the University of Pennsylvania's Wharton School and lives in Philadelphia. He happened to pass by the lawn of Independence Hall, and was drawn to the practitioners' peaceful exercise and displays. He stopped to watch. He told the reporter that Washington DC should make more efforts to help change this situation [the persecution of Falun Gong]. He said that Falun Gong practitioners should enjoy the right to practice in China, with the protection of law. No one has the right to deprive others of their freedom to belief, particularly such a peaceful group of people. 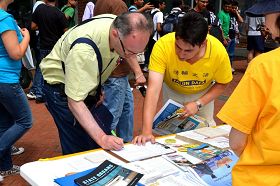 Mr. Maru Rorenblit (left) from Israel signs the petition to call for an end to the persecution

Mr. Maru Rorenblit from Israel said, “I know there is no democracy in China. I'm against the persecution, and support freedom. This is why I'm signing the petition.”

A family of four from Italy heard about Falun Gong for the first time. After listening to a practitioner telling them about the persecution, the mother, Sabrina, signed the petition right away to support practitioners' efforts to end the persecution. 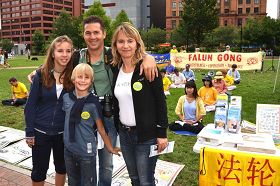 Ms. Sabrina Hencacci from Italy poses with her family for a photo after signing the petition

Michele Kaufman is a nurse living in Philadelphia. She and her daughter were attracted by the practitioners' peaceful exercise demonstration. She said, “What a beautiful and peaceful practice. I can feel that they are a group of good people.” After learning that the persecution has lasted for 13 years, Ms. Kaufman said, “I support them for holding a rally here today. No matter what, they are innocent.”