(Minghui.org) On July 20, 2012, Falun Dafa practitioners of Lima, Peru held a candlelight vigil in front of the Chinese Consulate, protesting the CCP's atrocities and calling on the international community to help stop the persecution in China. 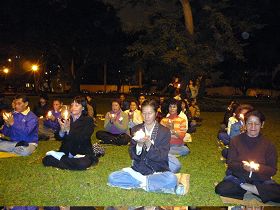 Candlelight Vigil in front of Chinese Consulate in Lima, Peru

On July 20, 1999, the then Chinese Communist Party leader Jiang Zemin launched a nationwide ban on Falun Gong. The persecution involved almost the whole country and it has touched almost every family in China in some way. The cruel torture of practitioners is unprecedented. The Chinese Communist Party's live harvesting organs from jailed Falun Gong practitioners to sell for profit has also been condemned as “the most evil crime on this planet”.

To expose these crimes of the CCP, Falun Gong practitioners all over the world have clarified the truth to people of all walks of lives and appealed to the world to help stop the bloody persecution. In Peru, the Falun Dafa practitioners have done the same. They have delivered truth-clarifying DVDs to thousands of Chinese restaurants, including the videos “False Fire,” “The April 25 appeal at Zhongnanhai,” and others. Many Chinese people have watched the DVDs and told practitioners that “Falun Gong is good! I believe what Falun Gong says,” and “Falun Gong is great! I support you!”

Falun Dafa, also called Falun Gong, is an advanced self-cultivation practice of the Buddha School introduced to the public in 1992. It has over 100 million practitioners and has been spread to over 100 countries.

“Russia: Truth-clarification Week in St. Petersburg Calls Attention to the 13 Years of Persecution in China (Photos)”

“Extraordinary Experiences in My Life”