(Minghui.org) On July 22, 2012, the San Diego Falun Dafa Association held a series of activities at La Jolla Cove Beach Park, a famous tourist site, including group exercises, display boards about Falun Gong and efforts made since the persecution began in 1999, and a candlelight vigil.

There are a dozen cities in San Diego County, and over the past 13 years, truth-clarification activities and free exercise teaching classes have been held in every one of them. Most of the cities have affirmed Falun Dafa officially. The mayors of Santee and La Mesa have received letters slandering Falun Gong from the Chinese Consulate. The San Diego Falun Dafa Association has been invited to many local parades and community events, and newcomers to the practice join on a regular basis. 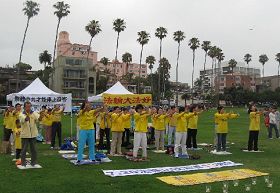 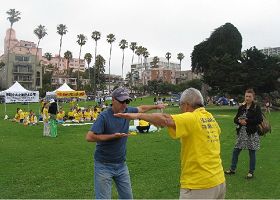 There was a big crowd in the park on Sunday. When the practitioners started doing the exercises in the afternoon, the soothing music and compassionate energy field immediately attracted a lot of tourists. They took photos and video. Some wanted to learn more about the exercises, and some who already knew about Falun Gong started to learn the exercises. 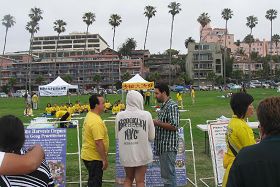 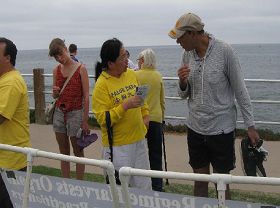 While the majority of the practitioners were doing the exercises, others set up display boards on the lawn near the beach. The display detailed the brutal persecution of Falun Gong by the Chinese Communist Party.

Some tourists heard about the persecution and the live organ harvesting for the first time. They were shocked, upset, and angered at Chinese Communist Party's atrocities. Many signed the petition form calling for an end to the persecution. Two young ladies from Eastern Europe had tears in their eyes as they read through the display boards.

After 6:30 p.m. the park emptied, and the practitioners sat on the lawn to share their experiences of the past 13 years of protesting the persecution.

Mr. Gao and Mr. Peng both came from Guangzhou City, China. They were in China when Falun Gong was spreading quickly before July 20, 1999, and after the persecution started. They shared stories from both periods of times and stated that righteous faith is indestructible.

Miss Snow came from Dalian City, China. When the persecution started, she was only 11 years old and in an elementary school. She saw her mother put into a forced labor camp for 3 years, her non-practitioner father divorce her mother, her loving grandfather die, and many other painful happenings. Even though she is now in America and has entered college, memories always bring tears to her eyes.

Tina had a similar experience. She was a teenager when the persecution started. Her appeal for Falun Dafa to the Beijing government landed her to a two-year forced labor term. Because of this, she was not allowed to enter college in China. Her husband, also a Falun Dafa practitioner, has been jailed many times, too and has been driven into homelessness over the past ten years. 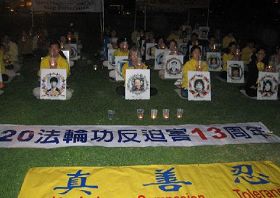 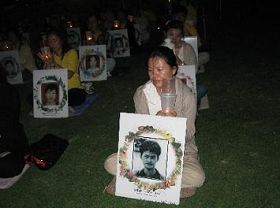 Candlelight vigil to commemorate the Falun Gong practitioners who have died during the persecution.