(Minghui.org) The 24th International Congress of the Transplantation Society was held in Berlin, Germany on July 15-19, 2012. Doctors from around the world who attended the meeting could see a group of people every day at the square in front of the International Congress Center (ICC) in Berlin. Some were meditating, and behind them were banners with messages in both English and Chinese. The messages conveyed that organs are harvested from Falun Gong practitioners in China. Some others in the group handed out informational materials. Many attendees coming out from the ICC Congress Center could see them. Some stopped to inquire, and others told the practitioners that they had learned about the ongoing crime taking place in China from other channels. 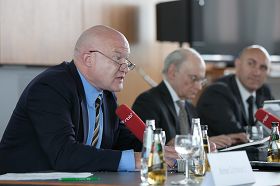 A forum, “Transplant Medicine at a Crossroads” was held on July 18, 2012 in Berlin. People in the picture (from left) are: American writer Ethan Gutmann, Canadian lawyer David Matas, and French physician Dr. Harold King 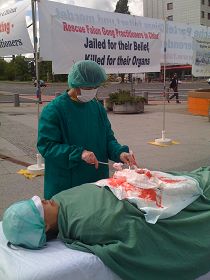 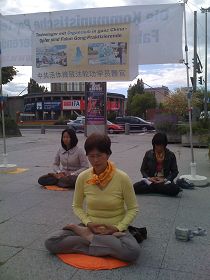 This group of Falun Gong practitioners wanted to tell the physicians, surgeons, and scientists attending the congress that more than ten thousand fellow practitioners in China have had their organs forcibly removed when they were alive, and the harvested organs were sold at lucrative prices to patients who needed organ transplants. Afterwards, the practitioners' bodies were quickly cremated to destroy the evidence of the perpetrators' crimes.

During the congress, on July 18, Doctors Against Forced Organ Harvesting (DAFOH) held a forum entitled, “Transplant Medicine at a Crossroads” near the congress venue. They discussed on how to stop the crimes of live organ harvesting in China.

DAFOH is an international organization founded by physicians of different specialties based in Washington. The aim is to stop all illegal organ trafficking practices in China and other countries. 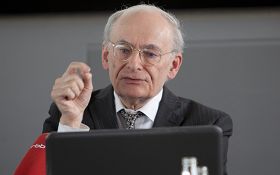 The CCP regime publicly acknowledged for the first time in 2005 that 95% of the transplanted organs were from executed prisoners. This statement proved a viewpoint that has long been speculated by the outside world, that the harvesting of organs is supported by the CCP regime.

Mr. David Matas, together with Mr. David Kilgour, former Canadian Secretary of State for Asia and the Pacific, made an independent investigation into the allegations of large-scale organ harvesting from Falun Gong practitioners by the CCP. They published their investigation report in 2006, and later the report was published in book form under the title “Bloody Harvest.” Mr. Matas held that the organs taken from executed prisoners, people of such special status, can not be considered voluntary organ donations. In other words, the act of forced organ removal and the auxiliary system have long existed under the CCP rule.

Dr. Arne Schwarz from Switzerland worked for years in a hospital as an IT expert. He said that there exists illegal trade in organs in many countries, but in China there are two differences. First, China is the only country where illegal trade in organs is permitted by the government; Second, China's military hospitals make huge profits through illegal organ trade.

The more than 160 Chinese doctors who attended the international congress had some differences with doctors from other countries. Those doctors could move freely, and had free access to meals at noon, but this was an exception for the Chinese doctors. They were taken to and picked up from the congress venue in three big vans at fixed times and locations, and had meals together at noon inside the congress center, and never came out.

“Hamburg, Germany: After Thirteen Years of Peaceful Resistance to the Persecution, People of All Nationalities Becoming Aware of the Truth (Photos)”

“Sweden: Practitioners Call for End to Persecution, and Bringing Jiang and His Accomplices to Justice (Photos)”