(Minghui.org) Hundreds of practitioners in the San Francisco area gathered at Civic Center Plaza in front of City Hall early on the morning of July 21, 2012. Performing the Falun Gong exercises accompanied by peaceful music, they began the day's series of activities to mark their 13-year peaceful resistance to the Chinese Communist Party's brutal persecution. 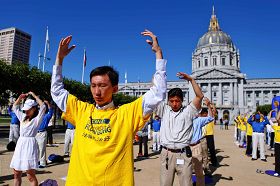 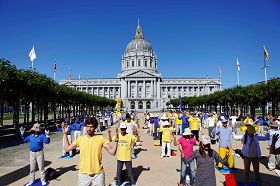 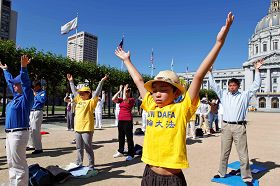 Practitioners in San Francisco do the exercises in a large group at Civic Center Plaza in front of City Hall early on the morning of July 21, 2012 to begin the day's series of activities to protest the CP's 13-year persecution

Civic Center Plaza is a famous attraction in San Francisco. In the peak tourist season, visitors from around the world come to the Civic Center. The practitioners' peaceful exercise scene drew their attention and many people stopped to watch, accept informational materials and speak with practitioners about Falun Gong and the persecution. Some Chinese tourists were surprised to see Western practitioners, and asked, “Why do Westerners practice Falun Gong?” The practitioners explained to them that Falun Gong has been embraced and practiced by people from more than 100 countries around the world. Only the Chinese Communist Party (CCP) persecutes Falun Gong. The Chinese tourists listened and watched with excitement and accepted flyers from the practitioners.

A young Chinese man said that he had heard from adults that Falun Gong is good when he was a child. He had also practiced Falun Gong. Unfortunately, only several months into the practice, the CCP started the persecution, so he stopped practicing. But he said that many people in China now curse the CCP at home. He also announced his resignation from the Communist Youth League and the Young Pioneers, affilicate organizations of the CCP.

Eighty-year-old Mr. Wu walked over to the practitioners while they were practicing the exercises. He had read in the newspaper that the practitioners would hold this activity and specifically came to offer his support. He expressed his deep admiration for Falun Gong practitioners. “In these years, I've often seen you do the exercises at Civic Center Plaza in front of City Hall, and patiently speak with passersby about Falun Gong. I've seen your great compassion and forbearance. So from the bottom of my heart, I say 'Falun Gong is good! Falun Dafa is good! Truthfulness-Compassion-Forbearance is good',” said Mr. Wu. He added that he had written with a brush the characters, “Falun Dafa is Good” and “Disintegrate the CCP, Stop the Persecution” and hung them in his home. He also photocopied them and gave them to his friends.

Mr. Wu came to the U.S. in 1997. He was imprisoned by the CCP and was only released when he was 65 years old. The reason for his imprisonment was that he studied at a university run by the Kuomintang, and he is an educated person. He said that since the CCP seized power in China, it has killed many educated people. He had witnesses the CCP's killing of hundreds of millions of Chinese people through their brutal political campaigns.

Mr. Wu said that only Falun Gong practitioners, in the face of the CCP's strong tyrannical power, and subjected to bloody persecution, still peacefully and persistently make efforts to awaken the people of the world. “Falun Gong practitioners are saving people,” said Mr. Wu. He said he had also written with a brush 'Shen Yun awakens conscience, the Nine Commentaries on the Communist Party heals illnesses and wards off misfortune.'” He repeatedly stressed, “Falun Gong practitioners' actions have won my admiration!”

“Los Angeles, USA: Practitioners Call for an End to Persecution on the 13th Anniversary of the Peaceful Resistance (Photos) ”