(Minghui.org) On July 13, 2012, more than 3,000 people, including Falun Gong practitioners and representatives from non-governmental organizations and human rights organizations, held a rally on the lawn in front of the Washington Monument in Washington DC. The rally was themed “Disintegrating the Chinese Communist Party (CCP) and Stopping the persecution of Falun Gong” to condemn the CCP’s 13-year-long persecution and to support the 120 million Chinese people who have quit CCP and its affiliated organizations. 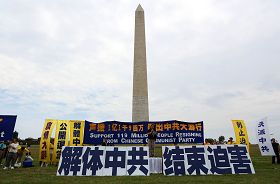 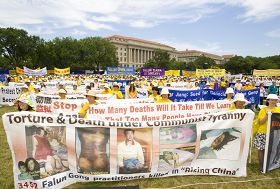 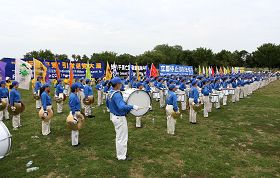 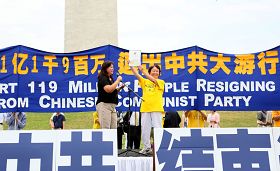 Lisa Tao (right), a volunteer for the Washington DC Quitting the CCP Service Center, reads a resolution from the County Executive of Montgomery County, Maryland to commend the local seniors who volunteer at the center 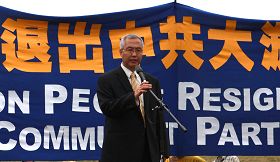 Zhiyuan Wang from the World Organization to Investigate the Persecution of Falun Gong (WOIPFG) spoke at the rally. “The WOIPFG has released investigation reports totaling more than 1.6 million words, including 22 volumes and 203 reports. The reports list more than 4,200 items of evidence, systemically exposing the CCP’s persecution of Falun Gong,” said Wang.

Wang stated that the 13 years of unlawful arrests, imprisonment, and torture have resulted in injury and death of numerous Falun Gong practitioners, and the CCP’s live organ harvesting from practitioners for lucrative profit is an unprecedented evil on this planet. The CCP’s persecution does not only persecute Falun Gong, but damages the morality of all human beings.

Mr. Wang pointed out that more and more of the CCP’s crimes in the persecution are being exposed and more and more people are joining the effort to protest the persecution. He gave examples of support from the Chinese public, such as 300 families in Hebei Province placing their fingerprints on a petition to call for the release of a local Falun Gong practitioner. The WOIPFG also received witness reports from governmental employees. Many police have also joined the effort to expose the crimes of the persecution and secretly protect practitioners. He said, “Such changes indicate that the CCP’s red terror is collapsing and the great tide of protesting the persecution is beginning.”

In the two-hour rally, three practitioners who suffered persecution in China narrated their experiences and exposed the CCP’s brutal torture of Falun Gong practitioners.

The rally also drew the attention of passers-by and staff workers in the buildings nearby. Cindy and Teresa of the Department of Commerce were among them. Cindy was impressed with Falun Gong. “These practitioners are peaceful and kind. Their belief in Truth-Compassion-Forbearance is the basis of human society. The CCP’s persecution of such belief is a crime against humanity,” she said.

Teresa had seen the peaceful protest last year. When she learned that the persecution is ongoing, she had tears in eyes and expressed her sadness. She thought that in the face of crimes against humanity, each individual, group and government needs to take action besides praying for help to stop the evil. She said, “Don’t give up. Keep doing what you're doing. This world benefits from you.” 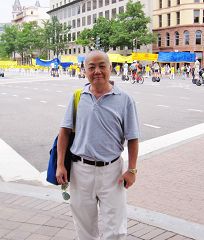 Mr. Li: “Falun Gong practitioners make contributions for others while seeking nothing in return.”

Mr. Li has been in business for more than 30 years in this country after immigrating from Taiwan. He came to Washington DC with his practitioner wife to support the event. He said, “Truth-Compassion-Forbearance is good. Everyone should follow this principle. It is easy to say the three words but hard to follow them. For years, I have seen my wife make contributions for others and seek nothing in return. Not everyone can do that. I am not a Falun Gong practitioner, but I admire them. Initially I complained as my wife spent so much time working to end the persecution. Later, I realized that this persecution has caused countless people to lose their normal life. Without the CCP’s persecution, Falun Gong practitioners would have a normal life. The culprit is the CCP.” 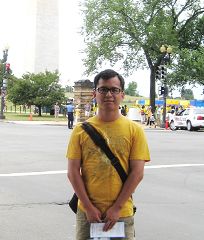 Jiang Yue, a finance software engineer in New York, made a special trip to Washington DC to support Falun Gong’s effort to protest the persecution

Jiang Yue, a finance software engineer in New York, came to Washington DC with his family to support Falun Gong’s effort to protest the persecution. He immigrated to the US more than ten years ago. This is his fourth year to support the protest event. He thought the rally was effective to let the world know the facts of the persecution. He said, “Before, I did not imagine that the CCP’s atrocities of live organ harvesting from Falun Gong practitioners could happen in China. After learning the facts, I felt that I should come to speak out. Such events should be conducted more often and on a bigger scale every year to have everyone know the facts.”