(Minghui.org) Local Falun Gong practitioners were invited to take part in the July 4 Independence Day Parade in Bristol, Rhode Island. Dozens of groups from different states and cultural backgrounds took part in the parade. The participating groups reflected people’s appreciation and love of freedom and democracy. Falun Gong practitioners presented a decorated float, a celestial maiden dance group, and a waist drum troupe. The Falun Gong entry was the only Chinese group in the parade. The 2.4-mile parade route was packed with over 200,000 spectators. 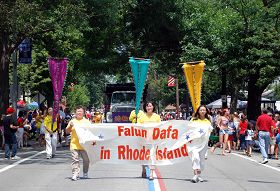 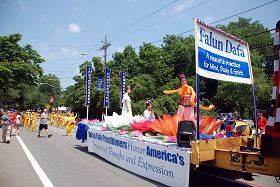 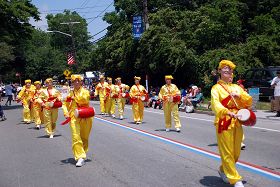 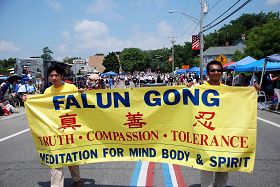 The Falun Gong procession in the Bristol Independence Day Parade

A number of spectators expressed appreciation for the beauty of the Falun Gong entry and asked questions about the practice.

The Falun Gong procession caught the attention of many Chinese spectators. Some waved to the practitioners, while many more took photos. A Chinese student from Brown University asked why the Chinese Communist Party would persecute Falun Gong. She said that her parents fled China after the June 4th Tiananmen Massacre in 1989, and thus she understood what the party can do to Chinese people. She was supportive of Falun Gong.

After the parade, a South African immigrant came up to the practitioners’ float and said, “Your procession is very beautiful and peaceful. Though we have different cultures, we share the same universal values. Truthfulness-Compassion-Forbearance are very good, and not everyone can live up to these. We need these three words.” When he heard about the persecution of Falun Gong in China, the man said, “Throughout history, many orthodox religions were persecuted in their early years. I do not understand why the Chinese regime would do this. But I am glad to meet you all today. Thank you!”

“Ms. Huang Xiujuan Dies as a Result of Persecution in Wenzhou, Zhejiang”