(Minghui.org) The multicultural festival in Kitchener-Waterloo began in 1967 with Canada's centennial celebration. At the beginning of summer every year, the colorful festival in Victoria Park draws many visitors. On June 23 and 24, Falun Gong practitioners participated in the event and were welcomed as in previous years.

The Falun Gong booth was a stand-out among the many different exhibitors. A yellow banner reading “Falun Dafa” was prominently displayed. Several practitioners demonstrated the exercises with the music. Falun Dafa information boards were set up on the lawn. Other practitioners offered calligraphy or distributed folded paper lotus flowers.

Teresa, a fan of meditation, felt a strong energy. She said that this was what she had sought for a long time. After hearing a practitioner explain the principles of Truth-Compassion-Forbearance, she commented, “Tolerance and looking inward when facing conflict are what I need!” She and her husband got the Falun Dafa website address and wanted to learn the practice. 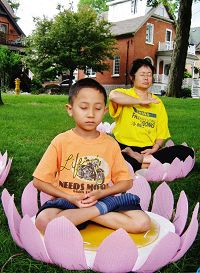 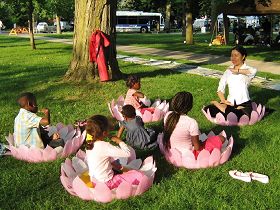 A group of playing children stopped making noise and sat down quietly beside a practitioner in mediation. They learned the full lotus position and the hand gestures to do the sitting mediation. Then they closed their eyes and experienced the inner serenity of meditation. A practitioner told them that, besides the sitting meditation for better health, it was more important to follow Truth-Compassion-Forbearance in their daily lives. The children then talked about how to follow the principles.

Shaima in a handicraft booth nearby watched them and said with emotion, “My daughter has never been so quiet or sat so long. Truth-Compassion-Forbearance is what everyone needs. Everyone should practice Falun Dafa.”

Pastor Simonson was touched. He brought his mother and wife to learn about Falun Gong,. “Falun Gong is a practice based on Truth-Compassion-Forbearance. Practitioners behave like lotus flowers and keep a high standard of morality in the secular world to ascend to their true selves.” Hearing this explanation, Simonson wished to learn more about Chinese traditional culture and the practice. 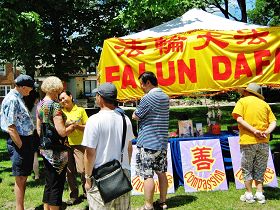 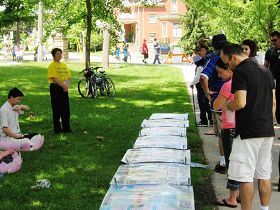 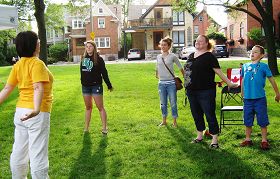 Stephen Woodworth, Member of Parliament, is one of the initiators of the Friends of Falun Gong in the Canadian parliament. Saturday afternoon he came to the Falun Gong booth to greet everyone. After accepting a golden paper lotus flower with a Falun Dafa information bookmark, he said it was the best gift he could give his wife. He learned about the marvelous effects of Falun Gong in health improvement and wanted to ask his wife to try it.

Ms. Wang immigrated from China to Canada many years ago but just moved here recently. She could not understand why the CCP would persecute Falun Gong. She had a frozen shoulder and worried she could not do the hand gestures in the exercises, though she wished to learn. A practitioner told her not worry, just follow Truth-Compassion-Forbearance, and her health would improve. Ms. Wang learned the exercises and said she would read Zhuan Falun in the library.

A young Chinese Christian missionary and his friend had heard of Falun Gong some time ago. They came to find out more about it and to study the poster boards on the lawn. After talking with practitioners, they said they would learn more about Falun Dafa.