(Minghui.org) Chung Ting-pang, a Taiwanese Falun Gong practitioner and manager at a high-tech firm, is currently under house arrest by the Ganzhou State Security Bureau in China. On the afternoon of June 17, 2012, family members of Chung Ting-pang went to the president's office to hand over a petition requesting the president to rescue Mr. Chung. They were accompanied by director Chang Ching-hsi of the Taiwan Falun Dafa Association and spokesperson Teresa Chu of the Falun Gong Human Rights Lawyers Working Group. An officer who met them in the president's office expressed concern and said that the President was aware of the issue. 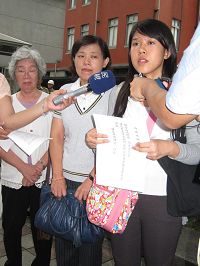 On the afternoon of June 17, 2012, family members of Chung Ting-pang went to the president's office to hand over a petition requesting the president to rescue Mr. Chung from unlawful detention in mainland China.

The petition of Mr. Chung’s family included a request that the Taiwan government appoint an attorney to help protect his rights, guarantee normal visiting opportunities for Mr. Chung's relatives in China, and insist that Mr. Chung be allowed daily phone communication with his family in Taiwan.

As for the CCP’s allegations announced by Xinhua News that Mr. Chung was suspected of involvement in broadcasting uncensored information in China, Mr. Chung’s family cannot accept it. Mrs. Chung said that her husband was under house arrest in the mainland and asked by the Chinese authorities to “assist with an investigation of Falun Gong.” Why was he later alleged to be “damaging national security and public safety?” She demanded the CCP to offer evidence and not to abduct and randomly accuse Taiwanese people. She appealed the Taiwan government to ensure Mr. Chung’s safety.

Falun Dafa Association director Mr. Chang Ching-hsi said, “Mr. Chung has been unlawfully arrested just because he is a Falun Gong practitioner. It demonstrates that the CCP does not respect international human rights. The Political and Legal Affairs Committee can arrest Taiwanese people at will, which damages the cross-strait relations.”

Human Rights Lawyer Ms. Chu stressed, “Without the presence of lawyer and family members, the CCP’s allegations cannot be trusted.” She said that on June 25, the case of Mr. Chung’s unlawful detention in China was reported to Vice Secretary-General Yang Ceng-lee of the Taiwan Branch of Amnesty International. Mr. Yang replied he would report it to Amnesty International headquarters in the UK as soon as possible. 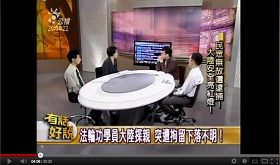 On a talk show program “Say What You Want” on the Taiwan public TV channel (PTS), Mr. Chung’s family members call on the Taiwan government to rescue Mr. Chung

The talk show program “Say What You Want” of the Taiwan public TV channel (PTS) invited Mr. Chung’s brother Chung Guang-ren and lawyer Teresa Chu on the evening of June 26 to talk about the issue of Mr. Chung’s arrest in mainland China.

Lawyer Ms. Chu said that there have been 16 Taiwanese Falun Gong practitioners unlawfully arrested in mainland China before Mr. Chung’s detention. These practitioners experienced interrogation, abusive treatment and attempted brainwashing for more than 24 hours continuously. Thus it is urgent to rescue Mr. Chung. However, progress is too slow as the Taiwan government deals with the CCP through standard procedures.

Dung Li-wen, member of Advisory Committee of the Taiwan Thinktank, said that the Taiwan government should not be subject to Communist China. He believed that the CCP’s kidnapping was to cause fear among Taiwanese people. He said that the CCP expects that the Ma government will deal with this quietly, but this way would encourage the CCP’s arrogance and they would do such things more frequently in the future.

Mr. Dung stressed that he felt that the Taiwan government should be more proactive in such situations. Previously, the Strait Exchange Foundation reported that more than 1,000 Taiwanese were missing in the mainland. He said, “The government should track the safety of Mr. Chung every day and issue a daily report on progress here and in Beijing.”

Taipei City Council member Lee Ching-feng said, “It is not allowed that one, no matter man or woman, young or old, and low or high status, is arrested or imprisoned under the excuse to have that person ‘assist with an investigation of Falun Gong’ or any other trumped-up reason. We once again call on President Ma to strongly urge the CCP authorities to release Mr. Chung. We also call on relevant government departments to initiate rescue work.”