(Minghui.org) Several Falun Gong practitioners in the Changchun City and surrounding area have been sentenced to forced labor. They do various menial tasks such as binding books and producing toothpicks, craft items, disposable chopsticks, paper bags, etc. Each floor of a labor camp is usually devoted to creating a single product, which can change over time. The labor camp teams work with companies outside the camp. To meet their quotas, the camps contract their slave labor.

Below are some products I was forced to make in 2000 while I was detained in the second team at Jilin Province Women's Forced Labor Camp, also known as Changchun Heizuizi Forced Labor Camp. The products included birds, butterflies, and small fish. I took samples of these items with me when I was released 12 years ago so that they could serve as evidence of the labor camp authorities' complicity in the persecution. 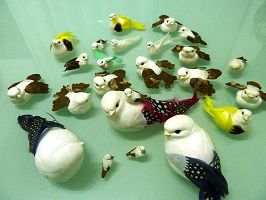 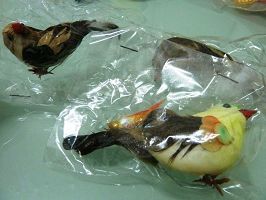 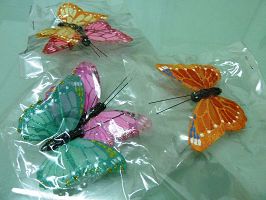 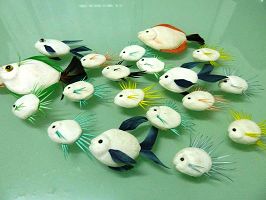 Making the small birds requires gluing each feather to the body. The glue was very pungent and irritating to the nose and throat. It was very common for those forced to do this work to have respiratory tract infections, and the majority suffered a chronic cough accompanied by a low-grade fever. To make it worse, all the workshop windows had to be kept tightly shut even during hot summer days, since the feathers were very light and the slightest breeze would blow the feathers everywhere. People suffered with headaches, nausea, and watery eyes. To make things more efficient and save the time it took for us to walk to the dining hall, lunch was brought into the workshop and served from a huge vat. It was common to work 14- to 15-hour days. If it was a rush job, we might have to work 18 to 20 hours a day. Everybody was assigned a daily quota. No food or sleep was allowed if the quota was not met. We were arranged into groups, and if one group member didn't meet her quota, then everyone else in the group would be affected.

The assembly line consisted of several steps, each of which was carried out by a particular workshop, so it was difficult to tell where the products would end up. Everyone knew the products were for export, but nobody ever saw the packaging or knew which country the final product was going to or under which company name.

During my detention in the Fifth Team in Jilin Province Women's Forced Labor Camp from April 2002 to the end of March 2004, my assignment was mainly making small birds. I happened to notice once that an item had a price tag of $3.99 and appeared to be destined for the United States, since there was a description in English on the outside of the box. I cannot remember the parent company's name.

The feathers came in various colors and were dyed with chemicals. After being soaked in dye, the feathers were hung up in the hallway to dry. They gave off a very unpleasant smell and attracted a lot of dust. We were required to use filters to remove the dust, but the poisonous fumes hung in the air. This caused dozens of us to have constant high fever and diarrhea.

“Dafa is Urgently Urging Me to Save People”