(Minghui.org) The Ireland Falun Dafa Association held a press conference on June 20, 2012 outside the Chinese Embassy in Ireland, strongly urging the authorities in Weihai, Shandong Province, and the Weihai Jing District Public Security Bureau, to immediately release illegally-detained Falun Gong practitioner, Gu Qing’ai. The daughter of Gu Qing’ai, Cui Tianzeng, currently lives in Dublin. She is pregnant, and within two weeks of her due date. Many Irish government officials and Members of Parliament have expressed support for rescuing Gu Qing’ai. 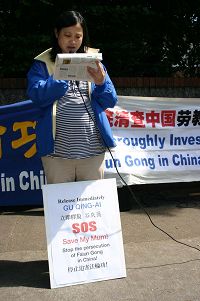 At the press conference, Cui Tianzeng said that on June 11 she learned from the Minghui website that her mother, Gu Qing’ai, had been taken away and detained by the National Security Bureau and the Jing District Public Security for clarifying the truth to locals. The news was then confirmed by relatives. Yu Jinchao and others from the National Security Bureau carried out the arrest.

In the end, she said, "Embassy staff, you have been listening. Our press conference today is mainly for rescuing my mother. According to the Minghui website, my mother, Gu Qing’ai, was taken away by the Weihai Jing District Public Security Bureau on June 9. The Public Security Bureau is saying that she is being held at Weihai Detention Center. Eleven days have gone by and my relatives have not been allowed to see my mother. We do not know her exact whereabouts. We are all Chinese. Please ask yourselves how you would feel if it was your family member who had been missing for eleven days without any news on their whereabouts. Moreover, I will give birth within two weeks. I'll soon become a mother. You also have your own children and your own parents. Please think it over, be it for your children, for your parents, or for yourselves. We will convey the message of our press conference today to China, demanding that the Weihai Jing District Public Security Bureau immediately release my mother, Gu Qing’ai. "

Ms. Dai, spokesperson for the Ireland Falun Dafa Association, said that the 610 Office of the Chinese Communist Party (CCP), and the Politics and Law Committee had recently staged multiple arrests of Falun Gong practitioners in Shandong Province. Practitioners were arrested, illegally detained, sent to labor camps, and even sentenced for exposing the CCP’s persecution of Falun Gong in various places such as, Ji’nan, Weihai, Yantai, Qingdao, Weifang, Gaomi, Zhucheng, Qingyun, Anqiu, and Pingdu. This fanatical move is nothing more than their last-ditch struggle.

Ms. Dai said, "Nearly 120 million Chinese people have renounced the CCP and its affiliated organizations, so I hope that the embassy staff will not fail to discern good from the evil, but rather follow the trend of the world and the cosmic changes to quit the CCP and guarantee your own safety. Meanwhile please fulfill your duty to convey overseas Falun Gong practitioners’ message to the mainland. 'Immediately and unconditionally release Gu Qing’ai and all illegally detained Falun Gong practitioners.'"

Many Irish government officials and Members of Parliament expressed concern and support upon hearing of the matter. The Irish Prime Minister and the Minister of Justice expressed concern. MP Mr. Sean Kenny specifically raised the matter with the Minister of Foreign Affairs, hoping to reach a resolution through diplomatic channels. MP Finney McGrath said, "I fully support your efforts to rescue your mother.” Many other MPs sent letters to express their concern, and regrets for not being able to attend the press conference due to scheduling conflicts.

I'm very sorry for not being able to attend today's event to expose the Weihai Municipal Government of Shandong Province for detaining Falun Gong practitioner Ms. Gu Qing’ai. I have contacted Ambassador Luo Linquan regarding this matter, and waiting for him to explain why this lady is illegally detained. She must be released immediately. This approach is anti-democratic, which must not be allowed to continue.

My best wishes and support!

Many Chinese and western people were carrying out business at the Embassy that day. They all accepted the truth-clarifying leaflets given out by Falun Gong practitioners and expressed their sympathy and support for Gu Qing’ai. Many drivers of vehicles passing by sounded their horns gently to show their support.