Transferred to Three Brainwashing Centers in One Month, Ms. Wang Yin Recounts Her Experience of Harassment, Forced-feeding, and Torture (Photos)

(Minghui.org) After Falun Gong practitioner Ms. Wang Yin was arrested on August 24, 2011, she was held at the Jilin City Shahezi brainwashing facility for eight days and was then transferred to the Xinglongshan brainwashing facility in Changchun City on September 1. On September 21 she was transferred again, to the Shulan brainwashing facility. She was not released until September 29. Within the span of one month, Wang Yin endured brutal persecution in these three brainwashing centers. During that period, the mistreatment and abuse included forced-feeding, sexual assault, being tied to a death bed, and other atrocities. The major conspirators in this outrage were Chuanying District 610 Office head Yang Binwen and his accomplices. Yang Bingwen boasted that he had “transformed” over 100 Falun Gong practitioners through brainwashing.

Ms. Wang Yin, born in 1969, is a former sales representative for the Jilin Radiation Chemistry Industrial Corporation. She started practicing Falun Gong in 1997. During the thirteen years that the Communist Party has been persecuting Falun Gong, she has been arrested and detained six times, and has suffered enormous physical and mental torment. The following is her narration of what she experienced. 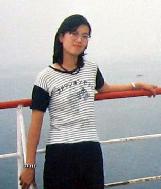 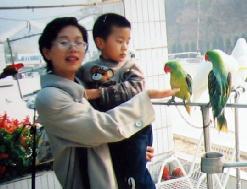 Wang Yin and her son

1. Sent to Three Brainwashing Facilities in One Month

(1) Arrested and Taken to the Shahezi Brainwashing Facility

Chuanying District 610 Office head Yang Bingwen held a brainwashing session on August 24, 2011. Zhang Qingshan from the 610 Office, Liu Zhe who was deputy head of the Huangqi Police Station and others surrounded my home, trying to arrest me and take me to the brainwashing facility. I refused to open the door. They used an electric drill to break my lock and got inside. They took away my computers and other personal belongings and tried to take me away. I refused to go. Liu Zhe and others carried me down the stairs. Liu Zhe pushed me into a vehicle and took me to the Shahezi Brainwashing Center.

That afternoon I heard my mom's voice through a window. My 82-year-old father used his cane when he walked; my mom held onto a fence, crying, calling my name. Since then, my parents and family members came almost every day to ask to visit me. To avoid my family seeing me, they locked me into a room on the opposite side of the building. Deputy head Xu Zhenxian from the Chuanying 610 Office participated in the persecution.

Collaborators persecuted and abused practitioners under the direction of the 610 Office agents. They came to my room to slander Master and Dafa. They brainwashed practitioners every day with lies, threats, humiliation, and insults.

I went on a hunger strike to protest the persecution. On the fourth day, Xu Zhenxian brought someone to force-feed me – an assistant security staff member named “Liu” who was in his 50s. A group of people pushed me onto a bed, used chopsticks to immobilize my mouth, pinched my nose and force-fed me. After the force-feeding “Liu” slapped me in the face four times.

The next morning I still refused to eat. Xu gave orders to have “Liu” feed me. She walked away with two others. As soon as Xu closed the door, “Liu” jumped on my bed, put his mouth to my neck while his hands grabbed my buttocks. I yelled and struggled, so Xu opened the door and came in again. I told them about he did. Xu said, “Then we'll have 'Liu' just hold your leg.” When force-feeding me, “Liu” pinched my private parts.

(3) Sent to the Changchun Brainwashing Center

Huangqi Street Committee staff in Chuanying District transferred practitioner Yu Yuelan and me to the Changchun Brainwashing Center on September 1, 2011.

They made me sit on a wooden chair, with my hands and feet immobilized. I heard guard Shen Quanhong beating practitioner Yu Yunlan in the next room. At night, Shen Quanhong tied me onto a bed and did not allow me to get up.

The next day they tied me to a bed that made moving impossible. They had an assistant feed me and take care of my bowel and bladder needs. Later on, they sent a person named “Wang Li.” She tied me up so tightly that it cut off my circulation, making my hands turn black and purple and causing excruciating pain. They tied me up for about ten days.

Around September 5, Wang Li wrapped my hands and feet with towels at night. Then she used four long cloth strips to tie my arms and legs. She tied them so tightly that very quickly my hands and feet became swollen. My hands turned purple and black. It was so painful that I began to sweat profusely. At that moment, Shen Quanhong came in. He pinched and rubbed hard on my arms, especially the armpit. The pain was hard to bear. He also jabbed at my ribs with his fingers in a very cruel manner. Later on Wang Li tightened the rope again. Shen Quanhong put a pillow under my back that made me hurt even more.

I did the Falun Gong exercises in front of the Jilin Province Jiangbian Municipal Government compound at the beginning of 2000. I was detained for five days. I went to Tiananmen Square in Beijing to appeal for justice on January 28, 2001. Police took me to the Huairou Detention Center in Beijing. They forced me to stand barefoot in the snow. Later on, I was transferred to the Jilin Third Detention Center.

Chuanying Police Department Political and Security section head Fan Yegang arrested me and took me to the Sixth Team in the Yinmahe Labor Camp.

On March 27, six different people abused me. Wang Xiuyan first used an electric baton to shock the back of my hand and arm. She also kicked me down repeatedly. Then, the guards shocked me with an electric baton. Qu Wenfang and Jin Aiying used an electric baton to shock my face and neck, which burned my face and caused my muscles to twitch uncontrollably. My neck and head would not stop convulsing. Jin Aiying saw that I was silent. She yelled, “Take her pants off and shock her genitals.” The abusers made other practitioners watch how I was shocked in order to scare them. The guards used three electric batons and shocked me for two hours. My neck started to swell and became as wide as my head and turned black.

(3) Experiences at the Heizuizi Labor Camp

I was transferred to the Heizuizi Labor Camp on September 11, 2001 and was tied to the death bed. My hands were cuffed to each side of the bed. My feet were tied to the foot of the bed. I went on a hunger strike to protest the persecution, and was force-fed a strong saline solution every day through a nasal tube. On the fourth day the person inserted the nasal tube violently and the saline solution entered my lungs. I quickly passed out and was sent to the hospital. While there, I was still handcuffed and my feet were tied to the bed. Because the hospital was afraid of bearing responsibility for my condition, they informed my family to pick me up.

(4) Arrested and Taken Back to a Brainwashing Facility

I was at work on December 30, 2002, when I was arrested and taken to a brainwashing facility. I went on a hunger strike to protest. Later on, I walked away from the facility. My husband could not bear the pressure of the persecution and we were divorced. Later, we remarried.

On May 2005, Jilin Security Bureau agents sent staff to investigate me. On the afternoon of July 15, 2005, agents from the National Security Team and staff from my workplace surrounded my mother's place, where I was staying. I refused to open the door. I walked to the balcony to explain the facts about Dafa to the neighbors and pedestrians. The police were afraid of more people learning the truth so they didn't break in. Two hours later, I left my mother's place and decided to go into exile to avoid further persecution.

On July 17, several persons from the Jilin National Security Team deceived my mother and convinced her to open the door, under the guise of collecting a utility fee. My 70-year-old mom was at home alone. They took away my Dafa books, cell phone, bank cards, computer, camera and other personal items, as well as 1,500 yuan in cash.

On December 13, three practitioners and I were surrounded by National Security Team agents. We were all arrested.

I was taken to the Jilin National Security Bureau's Detention Center that night. I was detained for one month. My hands and feet were cuffed and shackled every day. I was forced to watch TV programs that slander Falun Gong all day long.

During my detention period I went on hunger strike. I was sent to a hospital seven days later for force-feeding. They force-fed me once every 2-3 days.

On January 13, 2006, National Security Bureau agents released me on bail awaiting trial. My family signed a document and had 2,000 yuan cash extorted from them.

During the thirteen years that the communist regime has brutally persecuted Falun Gong, I was arrested and detained six times. I suffered tortures that harmed me tremendously, both physically and mentally. Whenever I was arrested, my family, especially my parents who were in their 80s, exhausted themselves going from department to department to request my release.