(Minghui.org) When Mr. Chung Ting-pang, a Taiwanese citizen and manager of Hsinchu High Tech Company, went to visit relatives recently in Jiangxi Province, China, he did not return home. Mr. Chung, who practices Falun Gong, was taken away by Chinese Communist Party (CCP) police at the Ganzhou Airport on his way back to Taiwan. His family does not know his whereabouts. On June 22, 2012, Mr. Chung's family, joined by Legislative Council members Cheng Li-chun and You Mei-nu, and Chairman Huang Kun-hui, held a press conference calling on the Taiwan Government to rescue Mr. Chung, and urging the Chinese Communist regime to release him immediately and unconditionally. 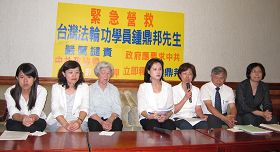 A press conference was held on the morning of June 22, 2012 in the Legislative Council, calling on the Taiwanese Government to rescue Chung Ting-pang, who was unlawfully taken away by CCP police. Mr. Chung’s daughter (first from left), his wife (second from left), his mother (third from left), Director Chung Ching-hsi of the Taiwan Falun Dafa Association (second from right). and Spokesperson Teresa Chu of the Taiwan Falun Gong Human Rights Team (first from right), took part in the press conference.

Mr. Chung’s wife said, “My husband was scheduled to return to Taiwan on June 18. After his relatives saw him off at the Ganzhou Airport, he has had no contact with his family in Taiwan. His relatives looked for him through various contacts and learned that he was taken away by local police. The purported reason for his illegal detention is that he was needed to 'assist in the investigation of Falun Gong.'”

Mr. Chung, 53, has a master's degree in Control Engineering at National Chiao Tung University. He has a son and a daughter. His father was a veteran who moved to Taiwan in 1949. Mr. Chung has two half-brothers in China, and often provides assistance to them. He has practiced Falun Gong for several years. He last visited China in 2007.

Mr. Chung’s mother said at the press conference, “Falun Dafa is great. The CCP should not persecute Falun Gong. Release my son as soon as possible.” Mr. Chung’s daughter graduated from Taiwan University this year. She posted an urgent call on her Facebook page, “My father has run into trouble. The Taiwanese Government must help us to urge the CCP to release him.”

Legislative Council member Cheng Li-chun said, “Immediately release Chung Ting-pang. We call on our government to rescue Mr. Chung using every possible means.” She mentioned that prior to Mr. Chung's arrest, the detention of Falun Gong practitioner Lin Hsiao-kai in China caught the attention of the president's office. “We call on the president's office to do everything possible to help secure Mr. Chung’s release so that he can be reunited with his family in Taiwan.”

Legislative Council member You Mei-nu noted that the governments across the Strait signed the Agreement on Joint Cross-Strait Crime-Fighting and Mutual Judicial Assistance. The agreement states that when a person from the other side is detained, that person's government must be informed in a timely manner.

Legislative Council Chairman Huang Kun-hui said that the CCP's arrest of Mr. Chung is a violation of human rights. The arrest is also clear evidence that the CCP infiltrates, spies, and collects information from Taiwan. He called on the Taiwanese government to help secure Mr. Chung’s release.

Lai Chung-chiang, a convener of the Cross-Straits Agreement Watch Alliance, emphasized that China does not have an independent judiciary, and the police can detain anyone at will. This is the primary way in which the persecution of Falun Gong is carried out. Lai stated that in fact, the Political and Legal Affairs Committee is the root cause of many human rights violations in China. Until the Political and Legal Affairs Committee is abolished, there will be no fair judicial system. Lai said, "The [Taiwanese] government should immediately come forward to negotiate Mr. Chung's release as soon as possible. Otherwise our alliance and civil groups will initiate a campaign to draw attention to the cases of our people’s personal freedom being violated in the mainland."

Ma Shao-chang, deputy secretary-general of the Straits Exchange Foundation, received a petition from Mr. Chung’s family on the morning of June 19. He said that on the same day, the foundation sent a letter to China's Association for Cross-Straits Relations, and requested the mainland authorities to assist. Mr. Chung’s family members called again on the evening of June 20 and said that Mr. Chung's detention was suspected to be related to Falun Gong. The Straits Exchange Foundation then sent a letter to the Ministry of Justice and the Criminal Investigation Bureau in the hopes that the matter would be dealt with through the Agreement on Joint Cross-Strait Crime-Fighting and Mutual Judicial Assistance.

Communist China did not release notice of any detention until five days after Mr. Chung's arrest. The Mainland Affairs Council in Taiwan said that the mainland authorities must take the issue seriously, and respect the universal values of freedom of speech and basic human rights. The council will continue to monitor the case and provide the family with necessary assistance.

Spokesman Teresa Chu of the Taiwan Falun Gong Human Rights Team said, “According to the latest news, the Public Security Division in Ganzhou, Jiangxi indicated that the National Security Bureau and 610 Office are in charge of Mr. Chung’s case. Falun Gong and the Falun Gong Human Rights Team will bring to justice those perpetrators in the National Security Bureau and 610 Office under the control of the CCP Political and Legal Affairs Committee."

Professor Chang Ching-hsi, director of the Taiwan Falun Dafa Association, urged the Chinese regime to release Mr. Chung immediately and unconditionally, and to guarantee that they will cease any future unlawful detention of law-abiding citizens.

Shao Yu-hua, female, went to Henan to visit relatives in late July 2009. When she went out on July 31, National Security Bureau personnel took her away. She was subjected to harsh brainwashing tactics, including sleep deprivation.

Li Hsin-ju, female, went to Nanchang, Jiangxi Province to visit relatives on January 29, 2004. Staff from the Nanchang National Security Bureau illegally detained her for 96 hours. She was subjected to inhumane interrogation, including a strip search. National Security Bureau staff attempted to intimidate Ms. Lee into becoming a spy to gather information about Falun Gong in Taiwan and around the world, and inform them about Taiwan's elections. She was pressured to sign "confessions."

Lin Hsiao-kai, male, went to Shanghai to visit Falun Gong practitioners on September 29, 2003. On October 7, he was detained by the Shanghai National Security Bureau for 20 days. A subsequent trial lasted almost 24 hours. He was ordered to renounce his belief and threatened with a prison sentence if he refused to reveal the activities of Taiwanese Falun Gong practitioners. He was threatened that he “would not be able to live in Taiwan” if he were to expose details of his ordeal in Chinese detention after returning to Taiwan. Finally, he was forced to sign a repentance statement before being released.

Wang Hsiu-hua, female, went to Shanghai on business on January 2, 2003. When she arrived at Pudong Airport, the police forcibly brought her to the Shanghai National Security Bureau. She was illegally detained for 28 days. She was subjected to more than 18 hours of interrogation every day, including verbal and physical abuse, threats, intimidation, sleep deprivation for 30-40 hours, and was forced to stand for prolonged periods. She was released after her family spent a lot of money to secure negotiations leading to her release.

Fan Guo-hua, male, went to Qingdao to visit relatives with his family. He was brought to a police substation on his third day there. The police beat him and deported his entire family the next day.

Chan Jun-pei, female, returned home to visit relatives on February 8, 2002 with her daughter. They were arrested by police at Hefei Airport, and were subjected to interrogation and intimidation. Ms. Chan's young daughter still suffers psychological trauma from the ordeal and has stated that she will never re-enter China.

Cheng Xi, female, visited relatives in Shenzhen on January 9, 2002. She was arrested and sentenced to a four-year imprisonment.

Du Shixong, male, was arrested in Beijing on February 5, 2000. He was subjected to physical abuse, intimidation, and mental torment. He was pressured to reveal the names of other practitioners.

Song Yan, female, visited relatives in Shandong on September 14, 1999. On her way to Beijing, the police arrested and detained her in Zibo, Shandong for 13 days. She was subjected to abusive intimidation. After her family paid a fine and wrote a guarantee statement, she was released.

Xiang Lijie, female, visited relatives in Jilin in September 1998. She was arrested and sentenced to a three-year prison term. She conducted a protest hunger strike for 55 days, during which time she was force-fed.