(Minghui.org) On Saturday, June 16, 2012, for the third time since last month, Falun Gong practitioners held an information day event at Neubrunnenplatz and Hauptbahnhof in the City of Mainz, introducing Falun Dafa to the locals and exposing the Chinese Communist Party's 13-year-long brutal persecution of Falun Gong. 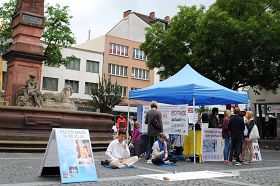 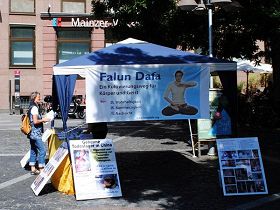 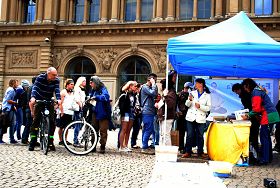 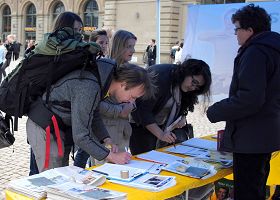 Signing to protest the persecution 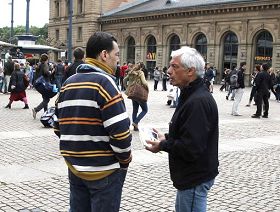 A passerby talking to a Falun Gong practitioner. 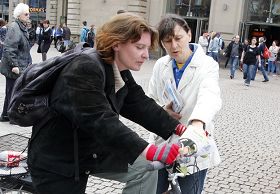 Practitioners demonstrated the five exercises beside the booth. The graceful and beautiful movements attracted many passersby. Some stopped to learn the exercises, while others asked for contact information for the free classes. Several residents read the display boards and studied the photo exhibit for a long time.

A German in his 40s came to the booth with his wife. After understanding the true situation, he signed the petition form. The couple talked to practitioners over an hour and learned that Falun Gong is a higher level cultivation practice. The man had practiced a Qigong exercise 20 years ago and still is curious about Qigong. He was very interested in Falun Gong and decided to learn it. He bought a copy of Zhuan Falun and asked for contact information for the local practice site.

When they learned that the Chinese Communist Party has harvested organs from living Falun Gong practitioners and sold them for profit, many people were so shocked that they were speechless, finally exclaiming that such an atrocity was almost unimaginable. Many stood in line to sign the petition calling for the persecution to end immediately.

Dr. Kumar said he couldn't believe any human being could do such a thing [as live organ harvesting]. When he saw the photos of Ms. Gao Rongrong, whose face was disfigured after long electric shocks and who also died in the prison, he said, “Even an animal won't do such a cruel thing!”

He then asked a practitioner why such brutal persecution was taking place in China. When he learned that it was only because of belief, he was incensed at the Chinese Communist Party. He signed his name and said, “Communist Party members are worse than animals.”

Some residents encouraged the practitioners. One said, “You are doing a great thing. I am very glad to see you here.” Another one said, “Thank you. Your endeavor is very meaningful, a great thing. Please continue!” When they left, they said, “We wish you success!”

Many Chinese came to the information booth to quit the CCP and its affiliated organizations (the Youth League and the Young Pioneers). Some were students and some were attending meetings in Germany, while others were tourists. In conversation, they said they already knew about the Chinese Communist Party's atrocities.

A lady from Amnesty International said she knew a lot about the persecution of Falun Gong. She said she would do more to help end the persecution. Later, she, her husband, and her daughter all signed the petition.

Mr. Jaeger works for a human rights organization. After learning the facts about the persecution, he said he would pass along the information to the German government through his channels. He left a business card with a practitioner and offered to help.