(Minghui.org) Teacher came twice to Guan County, Shandong Province, to teach Falun Dafa. With a wave of his hand, he cured the illnesses of my mother and many others and gave them a new life. Since that time I have had a wish; I want to tell the people of the world about the miracle that my mother encountered. On behalf of my mother and my family, I also would like to express my highest gratitude to Teacher. All practitioners in Guan County respectfully and sincerely thank Teacher for his compassionate salvation.

Teacher visited Guan County three times, in November 1992, May 1993, and the winter of 1996. It is hard to estimate how many practitioners came to his Fa lectures and how many miracles occurred. I can only tell my mother's story.

My mother is around 90 years old. Ever since she was 30, she had hepatitis type B and psoriasis. She went to all the major hospitals in Guan County, Liaocheng, and Jinan, and took a lot of medicine. Nothing seemed to produce any positive results and her symptoms worsened. By the spring of 1993, my mother could neither eat nor sleep. She had liver cirrhosis and fluid accumulation in her abdomen. She begged me for help.

I felt terrible and worried when I saw her swollen abdomen. The only option she had was a liver transplant, but even that did not guarantee her survival. I remembered hearing that Master Li had cured a stubborn disease for a Guan County resident who worked in the Department of Transportation. His name was Zhang Xiuying. I thought maybe Mr. Li could help my mother as well. I quickly told my mother about my idea. She was skeptical, but agreed to try it. While I worried about where I would be able to find Teacher, because he lectured around the country, I heard that Teacher was coming to Guan County soon. I told my mother the news and she was very excited.

At 11:00 am, Teacher went to the Guanzhou Hotel to have lunch with former deputy county head Qi Yufen and the president of the county's qigong association Wang. 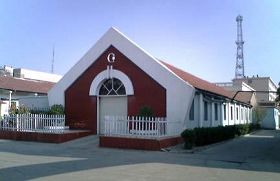 The Conference Hall of the Guan County Winery. Teacher lectured here twice when he was in Guan County.

A lot of practitioners went to the conference hall early and waited for the arrival of Teacher. Among them were Chinese officials including Shi Yongchao, then secretary of the Guan County Commission. It rained and hence some practitioners were late. Teacher sat down at the southeast corner of the hall and waited for them. While he waited, he talked to other practitioners and answered their questions. My mother sat quite close to Teacher.

When Teacher got on stage, he received warm applause. Teacher asked everyone to quiet down and said, “Here we meet again.” He later told everyone that we were very different from the last time he'd seen us. He said that we behaved based on the Fa's requirements and that everyone looked healthy. He approved of our achievements. He then told us about the 1992 Oriental Health Expo which he was invited to attend. The first morning he helped a woman remove a uterine myoma that was the size of a soccer ball. Immediately, her swollen abdomen shrank and her slacks were too big for her. Her family was very excited and told the host of the Expo about the miracle. The Expo staff broadcast the story and publicly awarded Falun Gong. In the afternoon, a person with lung cancer came to Teacher, and he was cured right there. He went to the hospital for a checkup the next day and brought back the results with him. The results stated “no cancer cells were found.” Everyone was astonished. Miracles happened every day to people who visited with Teacher during the Expo. In the end, by word of mouth, a large crowd surrounded the Falun Gong booth. Because of Falun Gong's excellent reputation, the practice was given the Star Qigong award and received a certificate. Because the Expo was a large scale state sponsored event, reporters from the major TV and radio stations, as wells as newspapers in Beijing were at the Expo. The Xinhua news agency broadcast the news nationwide and overseas. Through these articles, Falun Gong was introduced in Hong Kong and other countries. Several newspapers even showed pictures of Teacher. Falun Gong began to become known internationally.

Teacher then lectured for over an hour and answered some practitioners' questions. In the end, Teacher healed everyone's illness. He stood on the stage and held a microphone in his left hand. He told everyone to close their eyes and think of the illnesses that he/she wanted to heal. If he/she did not have an illness, they could think of his/her relatives' illnesses. He then asked everyone to relax while standing. He waved his hand as if he grabbed something and asked everyone, “Healed?” Some said yes and some said no. Teacher said, “I will remove another illness for everyone. Those with good enlightenment quality are fortunate today, because I cannot remove illnesses for just anyone.” Teacher waved his hand again and many people's illnesses were healed right there and then.

My mother followed Teacher's instructions: legs shoulder width apart, stand relaxed with knees slightly bent, closed eyes and she began to think about her liver problem. When Teacher said “Relax, relax,” my mother felt a chilly stream coming out of her liver and it ran into the ground through her right leg. My mother then moved around and the terrible symptoms she had before had disappeared and she felt extremely comfortable. She was as happy as a child and applauded enthusiastically to thank Teacher.

The meeting ended at 5:00 pm and everyone walked with Teacher to the outside of the Conference Hall. It was raining slightly, like Teacher's grace sprinkling over everyone. Teacher got into his car and left, and everyone else gradually left afterwards.

After Jiang Zemin's regime launched the illegal persecution of Falun Gong on July 20, 1999, my mother helped Teacher with Fa-rectification. She did the three things well. In 2000, my mother and several practitioners went to a practice site in a nearby town to join their morning exercise session. They left very early that morning and it was so dark that they could not see anything. A miracle happened again. They could see the road in front of them as clear as during the day. The light gradually disappeared when the sun gradually rose and they reached the nearby town.

I know of other stories of people whose illnesses were cured directly by Teacher or by practicing Falun Dafa.

1. Zhao Yuxian worked in the cafeteria of the Guan County People's Hospital. He now lives in Jingliu Village, Qingquan Community. Twenty years ago, one night after he got off work late, he accidentally fell off a bridge and was paralyzed from the neck down. His limbs were always cold, he could not control his bowels, and he needed help eating and drinking. When Teacher first came to Guan County, Zhao had been paralyzed for years. He had visited many doctors but no treatment worked. Zhao learned about Teacher through his relative. The relative found Teacher and he arranged that a veteran practitioner from Beijing heal Zhao. When the practitioner patted Zhao's body with his hands, an awful smell emerged from Zhao's body. Everyone surrounding Zhao subconsciously covered their noses and stepped back. After three hours of healing, Zhao was able to walk around slowly with some help. This was medically impossible yet it happened. Since then, Zhao's quality of life has improved significantly. He now lives well.

2. From November 14 to 16, 1992, Teacher held a healing session in the Guan County Veteran's Activity Center. A six-year-old girl and her father came from Lanwo Township to see Teacher. The girl had leukemia. She had been told by many doctors that it was a terminal illness. Her mother had left her, and her father, in order to pay for her treatments, was in a lot of debt. For some reason, he wanted to visit a relative in Guan County and took his daughter there with him. There they learned about Teacher's healing session. Teacher looked at the little girl, patted her where her illness emerged, and removed the karma and a lot of bad things. The dark purple bruises on her back and waist disappeared gradually. Eventually the skin of her back turned to a normal color and she was healed. The leukemia never came back and the little girl is now a mother of two.

3. Song Guizhen lived on Chengdong Street in Guan County. She frequently suffered from terrible headaches and often went into shock. She was unable to find a cure. In the summer of 1994, her daughter-in-law divorced her son and left him with an infant. The mental pressure exacerbated her symptoms and she was in constant, terrible pain for a long time. She listened to her friends and went to Teacher's lecture session in Jinan City in June 1994. She brought her child with her and her symptoms improved during the lectures. After the session, all of her illnesses disappeared. Ms. Song is still healthy.

4. A high school girl had chronic nephritis (inflamed kidneys). Later, her kidneys failed and she contracted uremia. Her arms and legs were severely swollen and her head was as big as a large watermelon. She could barely open her eyes. She attended Teacher's last session in Guangzhou in December 1994. Her health was completely restored after only one lecture.

5. A shop owner had severe stomach problems. She had scheduled surgery to remove about three-fifths of her stomach. A practitioner went to her shop and told her about Falun Dafa. They only talked a little while and the shop owner said, “This is a good qigong practice. I want to practice it. Where can I learn?” The reason the shop owner said that was because she had the flu and was very congested. However, after the practitioner started to tell her about Falun Dafa, her congestion was gone. Intuitively, she knew that Falun Dafa was good and wanted to learn it all the more. The practitioner then told her that there was a practice site in the lobby of the Guan County movie theater and every morning practitioners were teaching the exercises there for free. The shop owner went there the next morning. She saw everyone doing the second exercise and lifted her arms in front of her head. Three minutes later, she was feeling terrible in her stomach as if something were rushing out. She quickly left the lobby. The minute she got outside, she vomited uncontrollably. After that, she felt fantastic, especially her stomach. She then became a Dafa practitioner and her health is very good now.

There are many other stories like these. All practitioners in Guan County yearn to see Teacher come back for the fourth time!