(Minghui.org) On May 5, hundreds of Falun Gong practitioners in Canada and government officials held a rally at the City Hall Plaza in Toronto, celebrating the 20th anniversary of the public introduction of Falun Dafa. The government officials praised Falun Gong's positive impact on society, and condemned the persecution of the practice in China. 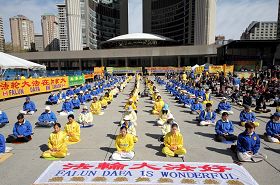 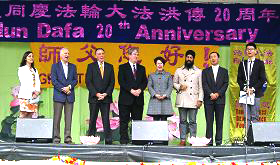 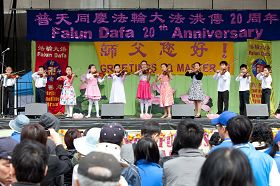 On behalf of the Canadian government and Prime Minister Harper, Peter Kent, the Minister of the Environment, praised Falun Gong practitioners for their contribution to Canadian society. He said that the slow movement and meditation, as well as the principles of Truthfulness-Compassion-Forbearance, have benefited millions people all over the world. 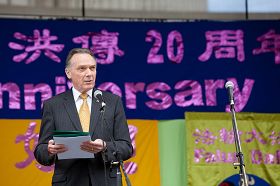 Mr. Kent reminded the audience that the persecution of Falun Gong is still going on. He emphasized the efforts of the Canadian government to promote human rights worldwide. He believed that one day China will also have the benefits of freedom and tolerance. 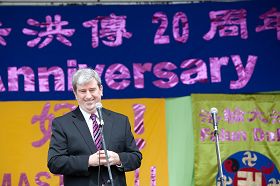 Glen Murray, Member of Provincial Parliament for Ontario and the Minister of Training Colleges and Universities

Glen Murray, Member of Provincial Parliament for Ontario and the Minister of Training Colleges and Universities, thanked Falun Gong practitioners for their efforts to protect human rights and raise awareness.

Mr. Murray said that Falun Gong is a component of the cultural diversity in Canada, and people should cherish the freedom in Canada and let people in other countries understand the importance of freedom. 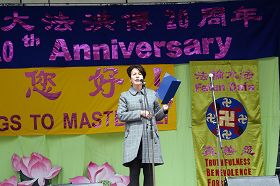 Jane McKenna, a member of Provincial Parliament for Ontario

On behalf of Tim Hudak, the Leader of the Progressive Conservative Party of Ontario, Jane McKenna, Member of Provincial Parliament for Ontario, praised practitioners for their efforts to introduce Falun Dafa to the public, and help people improve their health and quality of life. 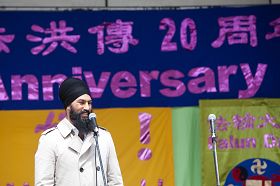 On behalf of the Leader of the Ontario New Democratic Party in Canada, Jagmeet Singh, Member of Provincial Parliament for Ontario, said that the exercises and teachings of Falun Dafa bring physical and spiritual well-being. He said that Falun Gong should be supported, instead of persecuted. He stated that the persecution of Falun Gong is wrong and that people should have the freedom of belief no matter where they live. 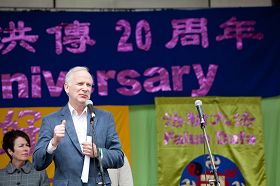 On behalf of the mayor of Toronto, Rob Ford, and the city council, John Parker, the Toronto city councilor for Ward 26, Don Valley West, asked what kind of political regime in the world could possibly oppose values the of Truthfulness, Compassion, and Forbearance. He said the regimes that oppose these values will collapse under their own weight.

Mr. Zhang Zhaojin, representative of the Falun Dafa Association in Toronto, provided an overview of the spread of Falun Dafa in the world. Several practitioners shared their experiences of practicing Falun Gong and how they have benefited both in body and mind.

“Slovenia: Over 100 Chinese Quit the CCP at Information Event (Photos) ”