Vancouver: Celebrating the 20th Anniversary of the Public Introduction of Falun Dafa (Photos)

(Minghui.org) On May 5, Falun Gong practitioners from Vancouver held activities in front of the Vancouver Art Gallery, and a parade from downtown to Chinatown, celebrating the 20th anniversary of the public introduction of Falun Dafa. Several parliament members sent greetings. 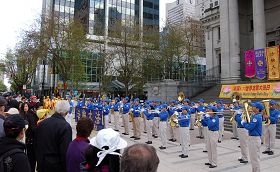 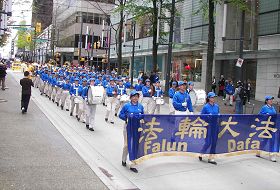 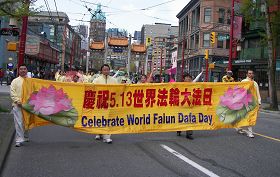 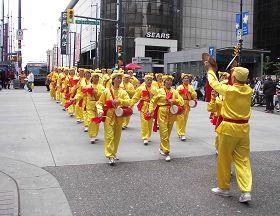 In the last 20 years, Falun Dafa has spread to more than 100 countries, and benefited millions of people both physically and spiritually. It has received numerous awards and proclamations from all levels of the Canadian government.

Parliament members Peter Julian, Fin Donnelly, and Libby Davies sent letters of support to the event. They praised practitioners for their efforts of protecting the freedom of belief, and bringing peace to the society. Sadie Kuehn, the chair of Friends of Falun Gong, attended the celebration. She said in her speech that the Chinese Communist Party is facing crisis now, so the international society should take this chance to exert pressure and help to stop the persecution of Falun Gong in China.

Ms. Feng from China also watched the performances for two hours. She learned the exercises during the event and they made her feel relaxed. She said: “Falun Gong teaches people to be good and follow Truthfulness-Compassion-Forbearance. I want to start practicing it.”

In Chinatown, the performances of the Divine Land Marching Band also attracted many Chinese. Many people took videos and pictures. Mr. Wu from China watched the entire event. He strongly condemned the persecution of Falun Gong, and praised practitioners for their peaceful resistance.