The Governor General's website gives the following description of the award: The Queen Elizabeth II Diamond Jubilee Medal, a new commemorative medal, was created to mark the 2012 celebrations of the 60th anniversary of Her Majesty Queen Elizabeth II’s accession to the Throne as Queen of Canada. The Medal is a tangible way for Canada to honor Her Majesty for her service to this country. At the same time, it serves to honor significant contributions and achievements by Canadians. 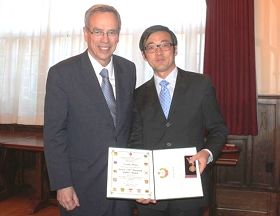 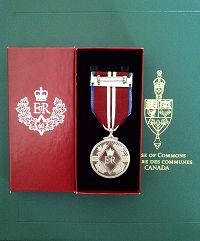 Joe Oliver, the Canadian Minister of Natural Resources, issued the Queen Elizabeth II Diamond Jubilee Medal to the recipients. Mr. Zhang Peixin was recognized for his efforts to protect Falun Gong practitioners' rights, and his service to the community. Mr. Oliver said that Falun Gong is a peaceful movement, and practitioners from this group are peaceful people. Unfortunately, he said, Falun Gong practitioners have been persecuted in China. Mr. Zhang has had the courage to peacefully resist the persecution. Mr. Oliver believed that peaceful resistance against the persecution would prevail.

Mr. Zhang has organized many signature campaigns, letting the public know about the persecution, and urging the Canadian government to take actions to rescue Falun Gong practitioners in China.

In 2009, Mr. Zhang and his friends founded an Asian association. Through this association, he has voluntarily helped many Chinese immigrants to learn about how Western society operates, and Canadian laws and policies. He has also helped many Chinese people to recognize the propaganda that the Chinese Communist Party has made about Falun Gong.

“I've been trying to help Chinese immigrants break through the cultural barriers between east and west, so that they can assimilate to Canadian society better,” he said.

“Many Chinese people don't know how to enjoy the freedom in Canada, and they don't dare to raise their voices, or get involved in important community affairs. On top of that, they don't dare to listen to Falun Gong practitioners,” Mr. Zhang said.

“One Chinese organization was afraid of 'getting involved in politics', so they didn't dare to invite local politicians and government officials to their events. They didn't even dare to sing the national anthem at their activities. Another Chinese organization did not know how to use the resources available to them. I made friends with them, and gave them advice. Also, I told them the facts about Falun Gong and the persecution,” said Mr. Zhang.

“It is natural for other ethnic groups, such as Jewish, Korean and Ukrainian groups, to take action when they encounter unfairness. They care about their own communities and the whole society. They have also helped in efforts to stop the persecution of Falun Gong. Canada is a free country, and there are channels for us to express ourselves. I have learned a lot here.”

“I also hope that one day Falun Gong practitioners in China will also have true freedom,” Mr. Zhang said.