(Minghui.org) Mr. Zhou Xiangyang has been on a hunger strike to protest his illegal detention and torture for almost a year. He is in critical condition. Mr. Zhou’s parents went to Binhai Prison in Tianjin on February 15, 2012 to request that Mr. Zhou be granted medical parole.

The elderly couple had to drive their tractor for one and a half days to get to the prison. They then camped directly opposite the prison for several days to demand their son's release. Mr. Zhou's father stood outside the prison, wearing a white vest on which he'd written words appealing for his son's release. He waited for a response from the prison authorities. 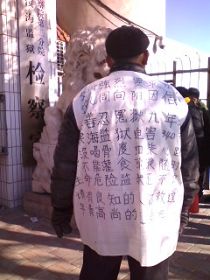 A large bale of straw was attached to the trailor, and the bale was covered with a large sheet. The sheet was used as a banner, with the words “Respect life, respect human rights and respect the law” written on it. 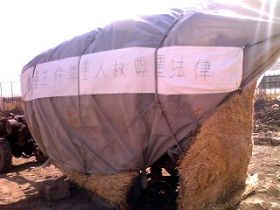 Bale of straw with a large banner bearing the words, “Respect life, respect human rights and respect the law.”

At around 1 a.m. on February 20, officers from the Changli County Police Department, 610 Office, Domestic Security Division and the Matuodian Township Police Station arrived at the prison in special police vehicles, with trailers and ambulances. At 2 a.m., Mr. Zhou’s parents were pulled out from the bail of straw and were carried to an ambulance. Mr. Zhou's father was shouting “Falun Dafa is good!” They were then taken to Changli Brainwashing Center.

The university campus is near the prison. Lots of people saw Mr. Zhou's parents there, and some people asked them what they were doing there. After reading the words of appeal, they were surprised to learn that the persecution of Falun Gong is still going on. A lot of people took pictures of Mr. Zhou's vest and the banner.

Prison officials failed to persuade Mr. Zhou's parents to leave, so they said that they would either let the elderly couple talk to them inside the prison or arrange for them to visit Mr. Zhou in the hospital. However, Mr. Zhou's mother said that they were just playing tricks, and that they were not going anywhere unless they released their son. The prison officials were afraid of the elderly couple being seen and then being reported by overseas media. Mr. Zhou's mother said, “They are just trying to fool us into leaving. We have been demanding to see our son, but they haven't allowed us to see him. Now that my son is dying, they want us to go to the hospital to persuade him to start eating again. However, now that they know we won't do as they ask, they have stopped meeting with us.”

Mr. Zhou's lawyer came from Beijing to the prison on February 19, and said that since he took on the case to represent Mr Zhou last year, prison officials haven't allowed him to meet with his client. When the lawyer tried to use the law to argue with them, he was told that he had to prove that he was not a Falun Gong practitioner, and then he could take on the case.

The following evening, Mr. Zhou's mother was able to speak on the phone, before being taken to the brainwashing center. She said that the police had promised to release her son the next week and that they would compensate him. But she didn't know if her son was still alive. She went on to say, “They arrested us during the night and have detained us. We are not allowed to see anyone.” Mr. Zhou's parents suspect that something terrible has happened to their son.

Amnesty International issued a document on February 8, stating that the prison authorities should release Mr. Zhou for medical parole, and urged the public to write to the prison to ask for Mr. Zhou's release on medical parole.

“[Selected Submission] Miracles Experienced While Cultivating in the Mountains”