Canada: Elaboration on the Facts at an Information Session Hosted by the “Parliamentary Friends of Falun Gong”

(Minghui.org) On April 25, 2012, the “Parliamentary Friends of Falun Gong,” which is composed of Canadian MPs, held an information session on Falun Gong. Chair Li Xun; spokesperson Ms. Grace Wollensak of the Falun Dafa Association of Canada; and David Kilgour, former Secretary of State for Asia-Pacific, all spoke, comprehensively explaining the facts about Falun Gong and the relationship between China's current situation and Falun Gong. 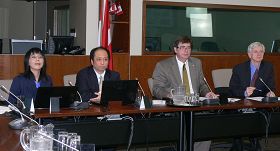 Li Xun, chairman of the Falun Dafa Association of Canada, explained to MPs and Senators what Falun Gong is; how Falun Gong was first introduced to the public in 1992 and has been embraced in more than 100 countries; the depth and breadth of the systematic and large scale persecution launched by Jiang Zemin's regime in 1999, including methods of torture and abuse, brainwashing, illegal forced labor, hate propaganda, and the extension of the persecution outside of China; and Falun Gong practitioners' peaceful and rational efforts to end the persecution.

Based on a large number of investigations and analyses and conversations with Falun Gong practitioners, Mr. David Kilgour, former Secretary of State for Asia-Pacific, and human rights lawyer David Matas released an investigation report in 2006 that came to the conclusion that there “continues today to be large-scale organ seizures from unwilling Falun Gong practitioners (…) Their vital organs, including kidneys, livers, corneas and hearts, were seized involuntarily for sale at high prices, sometimes to foreigners, who normally face long waits for voluntary donations of such organs in their home countries.”

Mr. Kilgour recounted how David Matas and he had visited about a dozen countries to interview Falun Gong practitioners sent to China's forced labour camps. These were practitioners who had managed to later leave the camps and the country itself. He said, “Many were sent to camps after mid-1999 without any form of hearing, on just a police signature.”

Mr. Kilgour cited the experience of Falun Gong practitioner Chen Ying, who was later awarded refugee status by the government of France: “Because I would not renounce my Falun Gong convictions, between February 2000 and November 2001, I was imprisoned three times without any judicial process…” “Each time, I was mistreated and tortured by the police…At the end of September, 2000, because I would not tell them my name, I was called out by the police and taken to a hospital for a complete medical examination: heart, blood, eyes, etc. I had to carry chains on my legs and I was attached to a window frame. The police injected me with unknown substances. After the injections, my heart raced, giving me the impression that my heart was going to explode…”

Mr. Kilgour continued, “According to research David Matas and I have done, set out in our book Bloody Harvest, practitioners have been killed in the thousands since 2001 so that their organs could be trafficked to Chinese and foreign patients. Between 2000 and 2005 alone, Matas and I concluded that, for the 41,500 transplants done, the only plausible explanation for sourcing was Falun Gong.

“Unfortunately, such developments have not yet ended the murders and trafficking in organs across China. Since we began, the number of convicted persons sentenced to death and then executed has decreased overall quite dramatically, but the number of transplants, after a slight decline, rose to earlier levels. Since the only other substantial source of organs for transplants in China besides Falun Gong is prisoners sentenced to death. A decrease of sourcing from that population means an increase of sourcing from Falun Gong.

“In 2007, a US government report estimated that at least half of the inmates in the camps were Falun Gong. Those profiting include surgeons, hospitals and the military, whose surgeons do a good deal of the organ pillaging and whose aircraft fly organs from rural labour camps to hospitals in major cities where patients await compatible organs based on prior computer matching of blood and tissue type.

“I think there is no doubt that China [the Chinese Communist Party] is the greatest human rights abuser in the world,” concluded Mr. Kilgour.

Ms. Grace Wllensak, Falun Gong spokesperson, commented from the perspective of the changes in the current situation in China, stressing that one should learn the facts about Falun Gong in order to have a deep understanding of China's current situation, because the Falun Gong issue is at the core. She briefly described a series of incidents since, on February 6, the police chief in Chongqing, Wang Lijun, attempted to defect to the US Consulate and sought political asylum. She also discussed extensive international media coverage given Wang Lijun, Bo Xilai, and Zhou Yongkang.

She said that those three men, who have gotten involved in political scandal, are the ones who have participated most actively in the persecution of Falun Gong. “The Falun Gong issue is not only a human rights issue, but the most important issue for China's present and future.”

She described changes in the power structure over the past ten plus years, which showed that the appointment and removal of the succession of leaders all had something to do with the persecution of Falun Gong initiated by Jiang's clique. For example, in order to carry out the persecution, Jiang Zemin, former leader of the Communist Party, decided to establish a new organization, the “610 Office,” designated as such because it was established on 6/10/1999. It is a Gestapo-like of organization that oversees all persecution-related issues. The first and foremost task of this “610 Office” was to completely destroy China’s justice system. The entire country and all its resources were diverted to carry out the suppression of Falun Gong. This crime against humanity continues to this day. Consequently, Falun Gong practitioners have since filed international lawsuits against dozens of high level Chinese officials for torture, genocide, and crimes against humanity for their roles in the persecution of Falun Gong.

Jiang was very afraid that, when he gave up power, he would be brought to justice, so he made a few adjustments in the top level leadership in order to make certain that the persecution continued. One of those adjustments was to promote several men who were heavily involved in persecuting Falun Gong to the core leadership, such as Li Changchun to be in charge or propaganda, Zhou Yongkank to be in charge of the police, etc.

In closing Ms. Wollensak said that Canada should be clear about the situation in China and stand with the righteous. “Those who have been involved in the persecution will be brought to justice and the best way Canada can encourage positive change in China is to support the end of the persecution of Falun Gong.”

Chairman of Friends of Falun Gong: Raise People's Awareness to Stop the Persecution

“As a Canadian Member of Parliament and as Chairman of this Parliamentary Friends of Falun Gong, I am dedicated to raising awareness not only to Parliamentarians but also to Canadians generally, so that some day soon, the abuses will end.”

Senator Consiglio Di Ninio said in an interview, “China is on the road to becoming an important nation in the world. But for it to be a great nation, it has to grant its people the fundamental rights and freedoms that most of the world take for granted. So I say, 'Have hope, do not give up the fight, and make sure that the flame stays alive, because you will achieve freedom, you will gain the rights that will allow you to practice the Falun Gong way of life.'”

Senator Di Ninio has four or five friends that are Falun Gong practitioners. He said, “I think that they are good people. They are wonderful Canadians. I have great respect for them. They are honest people, they are hard working people. I have nothing but positive feelings about them.”

“London, UK: Telling People the Facts about Falun Gong and Calling for an End to the Persecution (Photos) ”