Model Teacher Blind and Disabled after Eight Years of Imprisonment

(Minghui.org) After Jiang's Chinese Communist regime started to persecute Falun Gong in July 1999, I was mistreated many times. In 2002, I was sentenced to eight years in prison. Due to torture and forced administration of unknown drugs in prison, both of my legs became disabled and I am now blind in both eyes. 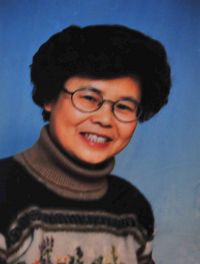 Ms. Zhang Yulan (before the persecution)

I was a history teacher at No. 63 Middle School in the Nankai District of Tianjin. Prior to beginning Falun Dafa practice in 1998, I had various illnesses, especially heart disease. One month after practicing, however, I found myself no longer needing medicines. The illnesses had disappeared. By following the principles of Truthfulness-Forbearance-Forbearance I became a model teacher at work. When I was imprisoned, many people sought to secure my release, including school officials, coworkers, and my students' parents. The gross abuse and mistreatment under the persecution caused me to become blind and disabled.

Agents from the Xiangyanglu Police Station arrested me on March 11, 2002, and ransacked my home and office. They confiscated my computer, money, and Falun Gong books and materials. They assumed I was involved in an incident where 36 visiting foreigners held up a truth-clarification banner on Tiananmen Square, and I was tortured in three separate sessions.

The first session took place at the police station. I was handcuffed and pushed into a metal torturing device and locked inside. My upper body was straight, and there were metal plates in front and behind me. They were so tight that I had difficulty breathing. There was a thick metal plate beneath with two holes for my ankles. I could not move.

This device was used to torture felons to obtain confessions. An inmate usually could not withstand it for more than several minutes. I was locked up in this iron chair for 14 hours. 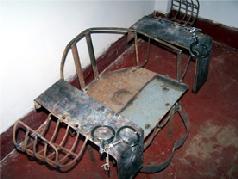 The second session took place in Nankai District Detention Center. Guards took me to the torture room, which had a metal cage with a fixed metal chair in it. A guard pushed me into the chair, handcuffed my hands to the chair arms, and fixed my feet to the chair legs. The detention center head pointed at my nose and said, “Nobody has been able to walk out of here for the past several years.” I was kept there for four days and three nights without sleep. Two guards held batons and kept watching me. They hit my head whenever I closed my eyes.

The third major torture session occurred at the Xiangyanglu Police Station several days later. Four guards took me there with my hands and feet chained and pushed me into a room that had a metal chair. Guards locked my upper body with metal plates in the front and back. There was a metal bar under that. I immediately had trouble breathing. The chains that connected my feet were wrapped around the bar and I could not move.

Suddenly, my entire family appeared in the room. My second sister kept crying when she saw how I was being treated. My sister-in-law said, “We will rescue you, even if we spend all our money.” I told them not to spend any money on getting me out since it would not work. My family came again the next day. They asked my son to kneel in front of me for several hours and beg me to stop practicing Falun Gong.

On the third day, four officials from my school came to try to persuade me to give up the practice. I asked them not to come anymore; otherwise, I would be continually tortured there in the metal chair without being sent back to the detention center. This torture continued for six days. After returning to the detention center, my lower legs were severely swollen—thicker than my thighs. I had also become much skinnier, and the inmates barely recognized me.

Forced to Sit on a Small Stool for an Extended Time

After being sentenced to eight years of imprisonment, I was sent to the Tianjin Women's Prison. Officer Li Hong in Division 4 was in charge of "reforming" practitioners. She first ordered me to stand still facing a wall from 6:00 a.m. to 9:00 p.m. every day for 15 days. I had to maintain that position even when I ate. This caused severe dizziness.

Then I was forced to sit on a small stool for extended periods of time. I had to keep my legs together with a plastic ruler inserted between my knees. The ruler was not allowed to fall on the floor. I was told to sit straight, with both hands on my knees, and no movement was allowed. This continued from 6:00 a.m. to 9:00 p.m. every day, and was sometimes extended by one or two hours. As time passed, my bottom developed many ulcers with pus or blood. One morning I hurt badly and moved forward a little bit. Inmate Fu Min saw it and hit me hard on my back. I immediately collapsed on the floor, as if my heart almost jumped out. I did not recover until 3:00 p.m., later that day.

Li Hong selected tall, strong inmates to watch me. Guards, collaborators, and inmates tried to "reform" me before 8:00 a.m. every morning. One time they defamed Master and Falun Gong. I did not want to listen and headed toward the door. Inmates Wang Liqin and Wei Meiling then beat me. Other inmates also joined and knocked my head against a wall. My head hurts even now.

The long-time sitting made my bottom fester, and the sores would not heal. My legs were also very painful. One day I felt very bad and stretched my legs. Inmate Chen Guifang yelled, “I will kill you!” She grabbed me by the throat with both hands and squeezed tighter and tighter. I tried to escape from her grip and cried out. Chen did not stop until many people came to watch. Another time Chen stabbed my arm with a sharp object, and I bled profusely. The other cell inmates were stunned.

As a result of the forced sitting for two years, two black pits developed on my bottom.

In the beginning I was allowed to eat steamed buns for breakfast and dinner. Later on the regular steamed buns were stopped. I was only given a small steamed bun. When I requested more food, the inmates said it was an order from officer Li Hong. Other practitioners helped me, and after many requests I was allowed more to eat. The guards then decided I would only be allowed to eat for three minutes. During the meal one inmate held a clock and another one stared at my bowl. Once three minutes were up, they took away my bowl and threw it in the trash. When guard Wu Chunhuan once came for an inspection, I told her about this. She said, “I think three minutes is too long. From now on, you will be allowed to eat for only two minutes.”

I decided to avoid being starved to death, so I learned to eat very quickly and swallow very fast, either with or without water. Because I got so hungry, I even ate fruit skins and drank shower water (non-potable).

Due to the long-term torture I had become very skinny. However, guards and inmates intensified the gross abuse and mistreatment by plying me with pills and forced drug injections. 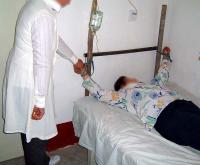 Every time after being given a forced medicine or I.V. Injection, I felt weak and bad. I had diarrhea, kept vomiting, and my body shook. My eyesight later became fuzzy. After a forced injection I was often unable to sleep and trembled more than before.

Guard Wu Chunlin once held me down while another person forced my teeth open with pliers, attempting to forcibly administer drugs. I clenched my teeth tightly. They were unable to do it, even after trying the entire evening.

On one occasion my hands began shaking, and the condition became worse and worse. My legs also became weak. But they had not recently forced drugs on me or injected me with drugs. Then one day I saw an inmate adding something to my cup. I immediately went to Li Hong’s office and told her to stop it. She said ferociously, “We have many ways of doing this.”

My health deteriorated after that. I could barely stand up, and my eyesight worsened. I could not sleep and did not want to eat. Only after I left the prison did I realize they had added unknown drugs to the steamed buns. I could not walk and could not see.

Initially I dared not tell my family what had happened to me, but I eventually decided to tell them, since I could die in the prison. I told my family about it, and my brother went to prison officials to ask why I had become this way. The prison officials then stopped torturing me. My family asked to take me to a hospital. They diagnosed late-stage optic atrophy, for which there is no cure.

That is why I returned home, disabled, after being imprisoned for eight years.

My husband lost money in his business. He sold the house to pay the debts. He divorced me and left me with a debt of 260,000 yuan. My son is 34 years old now and lives with me.

“Master Is Coming on a Lotus Platform ”