Ms. Cao Dangui from the Science and Seismological Bureau of Lanzhou City Tortured to Death in 2008

(Minghui.org) Falun Gong practitioner Ms. Cao Dangui, from the Science and Seismological Bureau of Lanzhou City, was detained in the Gongjiawan Brainwashing Center when she was 60 years old. She was severely tortured, both physically and mentally, leaving her completely incapacitated. She passed away on November 19, 2008. 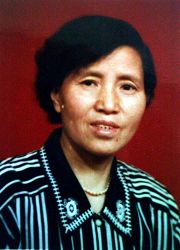 Ms. Cao lived on Weiyuan Road in the Chengguan District. In 2002, she was arrested by police from the Weiyuanlu Police Branch Station and was sent to the Gaolanshan Brainwashing Center in Chengguan District. At midnight, a drunken employee of the Chinese Communist Party (CCP) tried to break into her room, paralyzing her with fear. She was later transferred to the Gongjiawan Brainwashing Center in Lanzhou for further persecution.

Ms. Cao firmly believed in Dafa and refused to write the three statements to denounce Dafa. Personnel at the Gongjiawan Brainwashing Center tortured her by hanging her up for eight days and nights. They also beat her head with electronic batons, knocking three of her teeth loose. They tortured her for eight days. They deprived her of sleep and locked her in a small cell in order to force her to write the three statements. They also hired Officer Jin Wei to torture her, and did not allow her to use the restroom.

As result of this inhumane torture, Ms. Cao finally lost control of her bladder and bowels, and could no longer care for herself. She passed away at home on November 19, 2008.

The Gongjiawan Brainwashing Center in Gansu Province is an evil place where many Falun Gong practitioners have been horribly tortured. Over the past decade, more than 400 practitioners have been tortured and as a result, many have been disabled and many have died, including Pipa (Chinese lute) musician Liu Zhifang from the Gansu Province Yu Opera Orchestra, former senior engineer Qian Shiguang from the Chinese Academy of Oil Exploration, Zheng Fengru from the Gansu Province Construction Engineering Company, and Mao Yaping, Zhao Yingzhe and Zhang Minghai from the Lanzhou Electrical Machinery Company. Currently, Falun Gong practitioners Yue Puling, Chen Jianru, Zhang Luchan and Zhang Xiuli are being detained there.