(Minghui.org) May 13 this year marks the 13th World Falun Dafa Day and also the 20th anniversary of Falun Dafa’s public introduction. It is also Master Li Hongzhi's 61st birthday. In order to mark this special day and to express their gratitude towards Master, Falun Gong practitioners in Nordrhein-Westfalen held an activity called ‘Falun Dafa Information Day’ on the pedestrian street in the town centre of Duisburg on Saturday May 12. Falun Gong practitioners from many cities in Nordrhein-Westfalen participated in the activities. 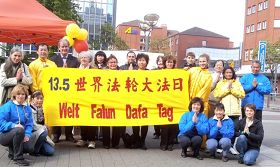 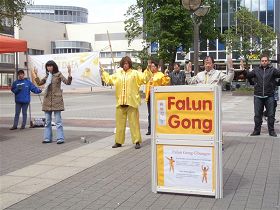 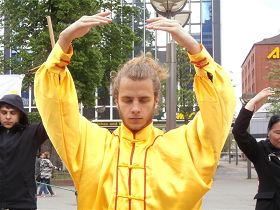 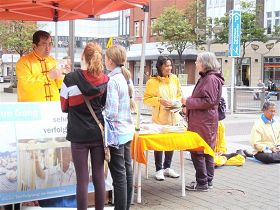 Clarifying the truth to visitors 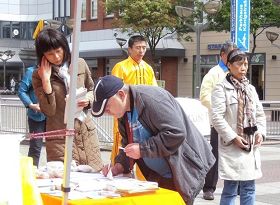 Practitioners who participated in the celebration varied, from western and Chinese who had practiced for 14 to 15 years to newcomers who started to practice only a year or a few months ago; from elderly practitioners to teenagers. There were also practitioners from China who had suffered illegal detention and torture by CCP agents.

Detlef Pepper is a software programmer who started to practice Falun Gong due to his poor health. Shortly after beginning, he attended the 1998 European Fa Conference, when Master gave a Fa teaching. He was very honored to shake hands with Master at the 1998 conference.

For Detlef, this precious experience seemed to have just happened yesterday, especially the feeling of shaking hands with Master. At the Fa Conference, he could clearly feel that Master had cleansed his body. Shortly after he obtained the Fa, he started to promote Falun Gong. After the persecution started in 1999, he immediately devoted himself to activities to stop the persecution. He also gradually brought his elderly mother, a devoted Christian, into Dafa. His mother Eva has now practiced Falun Gong for more than 10 years.

Eva is 77 years old this year and once had her own fashion store. After she retired, she worked with Detlef to take part in each weekend’s Dafa activities, rain or shine. Each time, she explained to visitors what Falun Gong was and collected signatures for petitions for hours at a time. She said: “Master told us, those without special skills should go out to distribute leaflets. I cannot do other activities, but I was a saleswoman before and can talk to anyone. I decided to go out to tell people what Falun Gong was. This is also the talent that Master has given to me. One hundred percent I believe in Master and the Fa.”

Despite the day's rainy and windy weather, passersby were still very enthusiastic about Falun Gong. According to practitioners, the enthusiasm and interest of the people from Duisburg towards Falun Gong was at an unprecedented high. More than 30 people asked for the venue, time and contact information for the Falun Gong practice sites. Many more people signed the petition to support Falun Gong. Though quite a few practitioners participated in the activities, there were not enough to talk at length with everyone who came by. Some people who wanted to learn the facts about Falun Gong simply grabbed the material from the desk and read them on their own.