(Minghui.org) May 13, 2012 marked the 20th anniversary of Falun Dafa's public introduction, the 13th World Falun Dafa Day, and revered Master Li Hongzhi's birthday. Practitioners in Hong Kong held a grand rally and parade on May 6, 2012 to joyfully celebrate this special occasion. At the same time they informed the public about the goodness of Falun Dafa, exposed the persecution of Falun Gong by the Chinese Communist Party (CCP), and called for an end to the persecution and to bring the chief culprit to justice.

The spectacular scene during the parade deeply impressed the spectators along the route, as they praised and supported Falun Dafa and opposed and condemned the CCP's persecution.

On May 6, hundreds of practitioners in Hong Kong and from other countries celebrate the 20th anniversary of Falun Dafa's public introduction and revered Master's birthday 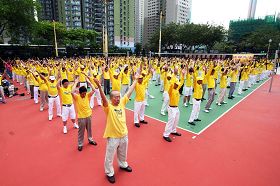 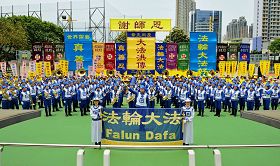 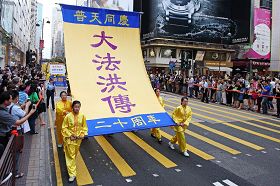 Parade warmly received by people along the route 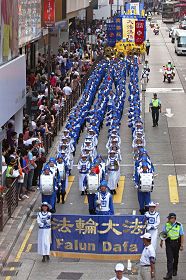 Led by Divine Land Marching Band, the parade procession draws the attention of many passersby 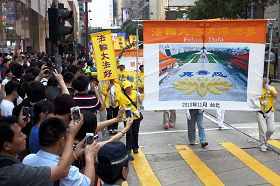 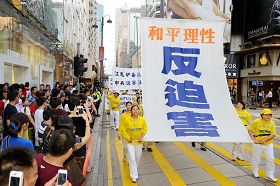 Practitioners call for people to work together to stop the persecution 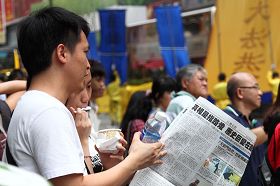 Practitioners from Hong Kong, Taiwan, Macau and Southeast Asia, dressed in yellow exercise clothing, gathered at Cheung Sha Wan Playground in Kowloon in the early morning to do the exercises accompanied by peaceful music.

The Waist Drum Team and Divine Land Marching Band presented performances, and then several hundred practitioners lined up and sang together “Falun Dafa Is Good,” and “Master, Thank You!” They hope that everybody knows “Falun Dafa is good, Truthfulness-Compassion-Forbearance is good.”

At 2:00 p.m. the parade set off, led by the Divine Land Marching Band. The procession marched along the busy downtown in Kowloon. Banners of various kinds promoting Dafa, opposing the persecution and supporting quitting the CCP organizations, coupled with resounding drum music, drew the attention of Hong Kong citizens and Chinese and Western tourists, who stopped to watch and take photos.

Many Chinese tourists saw the Falun Gong practitioners' parade for the first time, and they were amazed. A middle-aged man said, “It's first time that I have seen such a grand scene, really magnificent.” A young lady was impressed by the parade with the police officers leading the way. She said, “It's quite different from the mainland. It's spectacular!”

Supporting Falun Gong and Believing that Truth Will Prevail

A young lady from Shenzhen carefully read the messages on the banners, and said, “If all this is real, it [the persecution] should stop, and truth should prevail.”

Several tourists from Shanghai watched the parade with curiosity. A middle-aged man said, “I feel their rights should be respected and supported, not suppressed.” He believed that one day justice will prevail.

A man said, “I admire them, we can't see these things in public places in the mainland. I hope there will be similar activities in China.”

Hong Kong citizen Mr. Lim recently read a lot of the Epoch Times newspaper, and said that the newspaper is very righteous. He said, “I absolutely support them to oppose the persecution, and they should have freedom of belief. They had their organs harvested when they were alive, and the CCP is so evil.” “I believe truth will prevail.”

A citizen said, “It's Hong Kon'g freedom. It's a core value of Hong Kong, and we should cherish it.”

Letting the World Hear the Voices Opposing the Persecution

An elderly man held the Epoch Times Special Issue and condemned the CCP for persecuting practitioners, “It [Falun Gong] is for keeping fit and healing illnesses. Because so many of the Communist Party members were Falun Gong practitioners, it [the CCP] is afraid. I'm sympathetic towards Falun Gong.”

A tourist from Taiwan said that she condemned the CCP's persecution as “inhuman.” She said that she supports Falun Gong practitioners and hopes that the whole world will hear their voices and see their efforts.

Practitioner Mr. Deng, who came from Taiwan, found it meaningful to participate in the celebration. He said, “I find that Hong Kong residents are very supportive of Falun Gong, and I believe it is a change in the overall situation. More and more people have learned the facts about Falun Gong, and more and more people have despised the CCP's dictatorship. I believe that Falun Gong will be embraced by more people in the world. More people will come to learn it, and the CCP will be disintegrated soon, so that all Chinese people will obtain freedom.”

The three-hour parade came to its conclusion with the Divine Land Marching Band's performance at Star Ferry Pier in Tsim Sha Tsui.