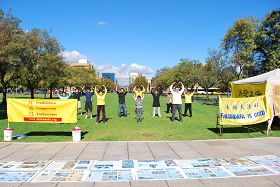 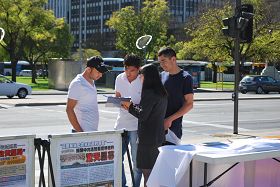 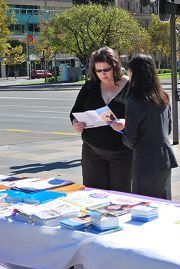 On April 28, 2012, Falun Gong practitioners in south Australia put up displays at Victoria Square in Adelaide City to help people learn about the April 25 event that took place 13 years ago. Passersby learned the truth about the unlawful persecution, and many were in disbelief when they learned about the cruelty of the suppression. Many passersby signed the petition calling for an immediate stop to the suppression in China.

Niki Trikilis, an Australian citizen, showed great concern, “Why is the persecution still ongoing? I am in shock. Don’t they know that Falun Gong is a peaceful spiritual group?”

Mr. Zhao from Shandong, China, was confused at first about the appeal, thinking that it was political. “I was lucky that later I learned the truth about the appeal. A friend of mine asked me if that many practitioners blocked the traffic and caused chaos around central government. I told him that the practitioners waited silently for the government officials to see them. When they left, there was not even a cigarette butt on the ground. After the Chinese Communist Party (CCP) took over China in 1949, people got used to the totalitarian rule. They could not understand why Falun Gong practitioners dared to speak the truth. Most of the people choose not to care about the truth. The international community for a short while believed that the Chinese officials began to have conversations with the people after the peaceful appeal. It’s a pity that the CCP still chose to crackdown on these people.”

“Rewarded for an Act of Kindness ”