Three Stories from China of the Miraculous Effects of Dafa

A college student in southwest China had uremia and had to temporarily drop out of school while undergoing treatment. He was given intravenous medication over a long period of time and also underwent chemotherapy.

Once, while getting an IV, the liquid medicine accidentally leaked out of the blood vessel and formed a two-centimeter high, walnut-sized lump in his foot. Even several months later, the lump was still not absorbed and it hardened and turned dark purple. Neither hot packs nor massage reduced it. The doctor said the only way to remove it was through surgery, which the student planned to have done. 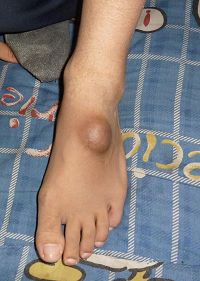 Photo taken in April 2011: The hard lump on the foot as big as walnut

Since the young man had to make hospital visits prior to the surgery, his mother arranged for him to stay at a relative's home near the hospital. This relative practiced Falun Dafa, and Dafa practitioners frequently came to the home to study the Fa. They often talked to him about Falun Dafa and of the miracles that people have experienced after beginning cultivation practice.

When the practitioners studied the Fa at his relative's home, the young man listened on the side. Later, he actively participated in the group Fa-study. He also studied the Fa and practiced the Falun Gong exercises on his own. Gradually, he forgot about the lump in his foot. Several months later, he discovered that the lump had miraculously disappeared. In addition, his hair, which had stopped growing due to the chemotherapy, had started to grow again. He even went out to get a hair cut, which he hadn't done for a long time.

Through this miracle, this young man and his family and friends have understood and greatly appreciate Dafa's magnificence. 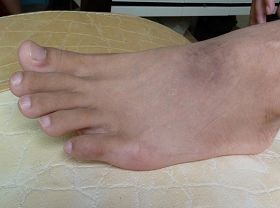 Photo taken in July 2011: The lump has disappeared with only a tiny mark left

I went to a family reunion yesterday. One of my relatives saw me and told me excitedly that his heart disease was fully cured and he no longer needed to take any medication at all. He also rolled up his sleeves and let others test his pulse. His gratitude fully showed on his face. I was also truly happy for him.

My relative was the director of surgery at a large hospital. He has good medical skills and he treated people well. But, due to the negative propaganda of the Chinese Communist Party (CCP), he did not treat Dafa with righteous thoughts. I often clarified the truth to him and gave him truth-clarifying brochures and Shen Yun DVDs. However, he had been so negatively influenced by the CCP that he was not receptive to the truth. But I never gave up, and, slowly, his attitude changed from objection to acceptance. He began to understand Falun Dafa more and treated me with a much better attitude.

Before the new year, my relative was diagnosed with severe heart disease. He relied on medication to maintain his health and he was under a lot of mental pressure. He had already contacted the hospital in Beijing and was prepared to have surgery there. When I saw him, I sincerely said to him, “Withdrawing from CCP will keep you safe,” and told him about the evil CCP's poisoning of the Chinese people. I also told him about the miracle of sincerely believing and reciting, “Falun Dafa is good. Truthfulness-Compassion-Forbearance is good.” I also talked to him about withdrawing from the CCP. After I finished clarifying the truth, he finally nodded and told me, “Please help me to withdraw from the CCP and its related organizations. Being safe is the most important thing. The CCP is too corrupt for me to give up my life for it.” His entire family was there and they all very willingly withdrew from the CCP. I was very happy that his entire family was saved.

From this experience, I understand that I need to have patience when saving sentient beings. I should not just give up if I cannot persuade someone to quit the CCP the first time. I should look inward more, no matter what happens. As long as I have the compassion that can melt steel, I can save sentient beings with my righteous thoughts. The people in this world all have a clear side and they are all waiting for us to save them. As long as I save sentient beings solidly, I will see “the shade of willows, the blooms of flowers, a place to rest my head.”

My Sister's Bent Back Straightened Up

On July 30, 2011, I attended a relative's wedding and ran into one of my sisters. Her back was bent as much 70 to 80 degrees. I asked her what had happened. She told me that she'd suffered from spondylitis for the past ten years. She constantly looked for medical treatments, but nothing worked. She also told me that she went to Beijing to see a specialist and had spent a lot of money, but nothing worked. She said, “If you have spondylitis, it cannot be treated.” She had lost any hope and just wanted to give up.

I told her that withdrawing from the CCP and its related organizations would keep her safe. She gladly agreed. I also gave her Dafa informational materials, which she accepted. The next month, on August 10, I brought Zhuan Falun and The Great Consummation Way of Falun Dafa to her. She was very happy when she saw the books, but she said that she had not studied at school for very long and she had almost forgotten how to read. Then she picked up The Great Consummation Way of Falun Dafa and said, “Oh, I can read this book. Master teaches the exercises in the book.” I left the books with her.

On September 23, I attended another relative's wedding and ran into my sister again. The first words out of her mouth were, “My back is straight now! It is no longer bent.” She also told me very excitedly, “I haven’t slept on my back for over ten years. Now I can. I have truly recovered.” I said, “Master saved you.” My sister responded, “You're right. I need to thank Master sincerely.”