On behalf of the people of Michigan, it gives me great pleasure to join with Falun Dafa practitioners throughout the Great Lakes State and in more than 80 countries to recognize the 20th anniversary of the introduction of one of the most well-known meditation and cultivation practices. Introduced by China’s Mr. Li Hongzhi in 1992, more than 100 million people have added this peaceful, healthy practice to their daily lives, shared individually or in groups.

As many gather to celebrate the positive health benefits of Falun Dafa and this significant anniversary, please know of our sincere congratulations and grateful recognition. 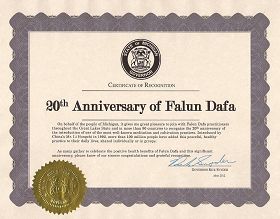