It was a beautiful sunny day. Spectators were fascinated by the grand event. The procession was so long that people couldn't see its beginning or end. Passersby stopped to watch the parade, and people in surrounding businesses came out to watch, too. 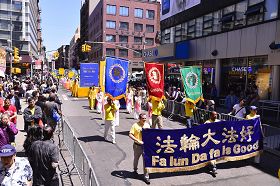 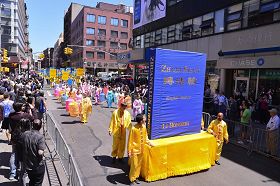 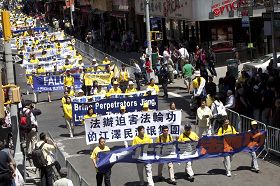 Ms. Yang, a spectator, told the reporter, “It's great to see so many Falun Gong practitioners participate in the parade. Everyone should have freedom of belief. I think Falun Gong is great!” Ms. Yang had read a little in a Falun Gong book and knows that Falun Gong teaches Truthfulness-Compassion-

Forbearance, improves health, and does good things for others, too. She would like to learn it. She said eagerly, “I really, really want to join (the parade).” She knew about the persecution and thought everyone should have freedom of belief.

Many spectators took pictures and videos of the grand parade.

Mr. Bai and his wife came from China to visit their family in New York. Mr. Bai had heard about the persecution of Falun Gong. He said, “There is freedom here. In Beijing, people don't usually talk about Falun Gong, but they do in private.” Mr. Bai had known about Falun Gong before 1999. He knew Falun Dafa was good.

A lady watched the parade at a subway station and talked her friend about it. She has been paying attention to Falun Gong and has seen several Falun Gong parades. She said this was an imposing event and that the band, especially, was amazing. 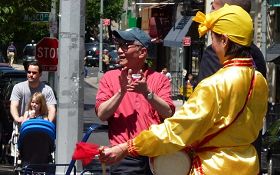 The waist drum team was at the end of the parade procession. Mr. Zhao gave a thumbs-up to Falun Gong practitioners and clapped. He said, “Falun Gong originated in Mainland China, but it isn't allowed there. Now there so many people practicing Falun Gong in so many other countries. It is about understanding life and respecting people. Truthfulness, Compassion, and Tolerance are the basis of being an upright person. They were passed down in our Chinese tradition in our nation from a long time ago.” Mr. Zhao bought two boxes of soft drinks for Falun Gong practitioners. He said Falun Gong practitioners had been working very hard in such hot weather.